All’s Quiet On The Western Front

The holding pattern arrived earlier this year. For those of you who are new to our little prison riot here, when we hit July and August most of this becomes my own stream of consciousness. So I’ve got some thoughts to spit out about the Hawks and others today, if for no other reason than I’m bored.

We had a nice little Twitter kerfluffle yesterday when I retweeted a reporter in Miami saying that the Hawks and Panthers had a deal for Patrick Sharp but ol’ Shooter nixed it. It was from CBS Miami’s David Dwork (I only just realized what an amazing name that is). Of course, any time you do this there’s a counter surge from others saying that this is all poppycock and their sources say that the teams haven’t spoken in weeks. Sometimes I wonder if this isn’t for effect more than actual reporting so everyone can cover their ass. Either way, it’s kind of impossible to know what the real truth is.

As our fearless colleague Fifth Feather then pointed out, the Hawks have been down this road before. Draft Day ’11, there was a report floated that Brian Campbell had shot down a trade with Columbus, though no one’s sure if that actually happened. About an hour later, he was on his way to Miami. There is precedent here.

I suppose the theory is that if you put it out there that you’re trying to dump a player, that player will feel unwanted and eventually acquiesce to whatever outpost you want to punt him. That doesn’t always work. Mats Sundin didn’t leave Toronto until he was damn good and ready. Same with Tomas Kaberle (and didn’t those acquisitions work out well for everyone?). I don’t know if it works, but you could certainly start to see where the Hawks are trying to prepare the ground to get Sharp somewhere that’s not on his list of 10 teams.

There is only one team that the Hawks would even consider sending him to that still needs to get to the floor, and that’s New Jersey. And they already have a collection of old left wingers who used to play for the Hawks, in Havlat and Ruutu. So I doubt that’s going to happen. But that would be kinda funny I guess.

The thing is now you’ve waited everyone out. Whatever free agents teams were chasing have likely already signed. So you know who missed out. And they’re apparently not calling. I can’t even figure out who they are. There are less dumb teams now. If Sharp were in the last year of his deal, you could probably convince a rebuilding team to take him on because they could flip him at the deadline for more parts (basically the kind of player the Leafs have been signing all summer, as they’ve taken lessons from Theo Epstein). But he’s not. This could honestly carry all the way into training camp when someone else gets hurt.

But it’s not like Sharp is an albatross. He’s still a productive player. Eventually, someone is going to want him.

-I love it when the Canadian media acts like every team south of the 49th merely exists to provide the SEVEN with talent, which is basically all the time. So a bunch of Edmonton writers are looking at the Hawks’ cap problems, adding two and two and getting pudding, and already deciding who they’ll pair Brent Seabrook with when he becomes an Oiler. Nevermind that Seabrook has a no-trade, and whatever limits it has I can gauran-damn-tee that EdMo isn’t anywhere on it.

McClure has speculated that a Seabrook extension was going to be the “Convention Surprise.” I wouldn’t have been shocked if that was the plan, but as the Hawks still have money to sort out that’s probably unlikely. What is also unlikely is that Seabrook is going anywhere, and will be the latest to be trumpeted as, “TAKING LESS MONEY TO STAY.” There was buzz that Seabrook would ask for $8 mildo per if he hit the open market, but it’s going to be hard to ask for that when the two-time Norris and current Conn Smythe holder, who just happens to be Seabrook’s main partner, is going to earn 7.5 in salary in the upcoming season. Calm down up there Albertans. Enjoy your three week summer and leave us alone.

(They also seem to think Darnell Nurse wouldn’t be part of any mythical Seabrook deal, which is a whole other level of hilarious).

–“It was tough years for (the Blues). We need to stay all together, all 25-26 guys together. I think the main part for me, we need to have one goal. It’s not about points, it’s not about goals, it’s not about whatever. It’s all about the Cup. If 26 guys do the same thing, I think we can make it.”

I don’t want to make too much of it, but seeing as how Vladimir Tarasenko is now officially THE MAN in St. Louis, that does make for interesting reading, no? We know what the whispers about the Blues have been for years now. They’re entitled, they don’t always care, they’re focused on the wrong things. These things happen when your core has gotten two coaches fired and is well on its way to a third. Tarasenko seems to sense that.

Because this should be the Blues year, ’15-’16. The Hawks have lost parts and will need time to get it all up and running again (whether that’s April or October ’16, we’ll see). No one else is claiming this division. The Kings have huge questions. The Ducks are the Ducks. They’ve dumped Oshie, partially for his fraud-status. But they have a coach on a one-year deal, which will go great with this group. They haven’t added dick. Looking forward to watching it all burn down again. 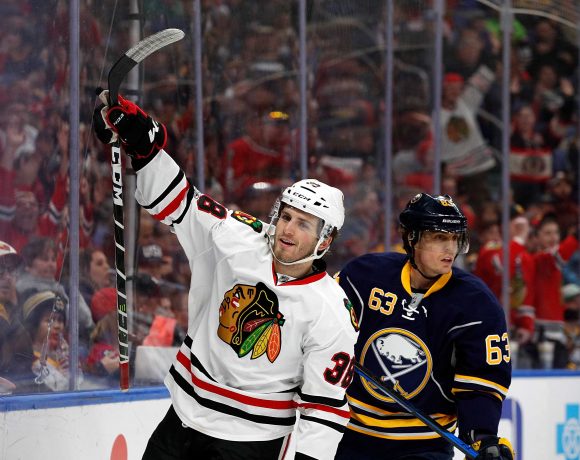