I didn’t realize that the Hawks had only won two games in regulation in the past three weeks. That needs changing. Isn’t it a wonderful world when you can actually ask for a change in how you win?

Anyway, the Hawks continue this most-ground-you-can-cover-in-four-games trip with a dip down south to face the Stars for the second time this year. You’ll recall the first time these two met, as the Stars jumped out to a 2-0 lead. But the Hawks took more and more control, getting two power play goals to get it to OT (and without Kari Lehtonen it wouldn’t have gotten that far) where another PP goal from Hossa finished things.

The Stars come into this one having lost three in a row, though that’s a tad misleading. They were all over the Ducks last out — at least in the 3rd where they outshot them 12-3 — but couldn’t find a crack in Jonas Hiller and lost in a shootout (jerks). Before that they were well worked by the pretty punchless Predators. However, before this streak the Stars horsed both the Blues and Kings, so they are capable of popping up with an inspired effort.

However, a lot of their zip goes out the window when Jamie Benn doesn’t play. He’s missed the past two games, but is a gametime decision tonight. Which means it would be a surprise if he doesn’t suit up. If he does play, he won’t be playing with Jaromir Jagr, as those two have yet to click.

And quite frankly, you can look for Jagr to not click tonight at all anyway (jinx!). While fans and commentators love to fawn over his resume, considering that Keith, Seabrook, Hjalmarsson, and Oduya will be up his ass all game, you can likely count on him to hit “Fuck This” gear at even-strength. Give him too many looks on the power play, and it’ll be another story, though.

Other threats are the so underrated he’s overrated but we’ve said that a lot so now he might just be rated Loui Eriksson, who murders the Hawks. Derek Roy has yet to get his goal-scoring together, he’s only got three all season. Brendan Morrow just isn’t the monster he used to be, as tends to happen when your neck has turned into stucco. In fact, Morrow hasn’t cracked 11 minutes of ice time the past two games, as Glen Gulutzan has really leaned on the top of his roster lately. The top two lines will see over 20 minutes, and Robidas and Dillion will crack 25.

But that’s where the soft underbelly of the Stars is and has been for awhile. Stephane Robidas would be one of the best second-pairing guys in the league, but in Dallas has been generally miscast as a #1. Alex Goligoski hasn’t done anything to make Stars fans forget he was traded for James Neal and start violently sobbing. Dillon has a bright future but is getting overexposed.

Even in the games the Hawks have lost to the Stars, generally, it’s been Lehtonen bailing out a simply scorched defense. And it’s any way the Hawks forwards want it. Speed to the outside, inhaling them on the forecheck, causing turnovers through pressure, it’s a buffet. Don’t see why it shouldn’t be tonight.

For the Hawks, Rozsival looks like he’s returning tonight after Sheldon Brookbank’s wonky game against the Jackets. Bollig will keep his place, as he probably should after some strong shifts on Thursday. Yeah, I said that. And we’re all hoping Jimmy Hayes can survive 60 minutes without tripping over himself. But no one’s holding his or her breath. Hayes might not have all that much leeway, Jeremy Morin scored again last night.

The Hawks always seem to lay one clunker in Dallas, and Lehtonen always seems to be in Norse God form against them. But that game may have been the first one, and the Hawks won anyway. One win in a shootout over the Jackets does not constitute a new streak. A second win wouldn’t either, but it would have them poised for another.

Tactical Nuclear Penguin: What Should The Hawks Change? 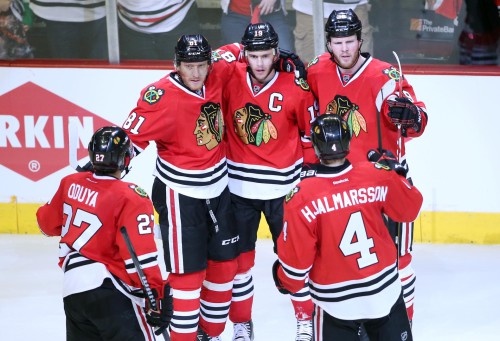 Take Me To Your Backwoods: Looking Behind The Curtain Of Game 1