Andrew Shaw, You Can Play, And The NHL In This Terrible World

Yesterday, the NHL and You Can Play announced ambassadors for YCP for each team in the NHL. Reading the press release, it isn’t really clear what these ambassadors are supposed to do and whether it’s simply ceremonial or not. I’m guessing they just stand there during a press conference whenever a team is having a You Can Play night, and god help us if they have to talk. As far as I can tell the Hawks don’t have a YCP night, but maybe that will change. Trevor van Riemsdyk was named the Hawks ambassador. I don’t know whether he volunteered for it, or was chosen simply because no one else wanted it. I hope it’s the former. It would be really great if someone with real clout on the team was named, who wouldn’t be afraid of being out front on the issue either. But I guess they’re too busy telling me which type of kale I should grow? Is he going to be at Pride in June? The Hawks have had a delegation there recently but the only active player to ever appear was Brent Sopel, and “active” is being kind at that point. There’s certainly more to be done.

Anyway, there was some consternation that Andrew Shaw was chosen as the Montreal Canadiens’ ambassador for YCP. The reasons everyone would take notice of that are obvious, given that Shaw was suspended for calling a referee a “faggot” during Game 4 of last year’s first round and was suspended a game.

I’m not so sure Andrew Shaw isn’t exactly the type who should be chosen, or close to it.

At the time of Shaw’s apology, I was skeptical. When these things happen you’re never sure if an athlete is sorry he made the mistake or sorry he got caught and shamed. The more I read about it the more Shaw’s apology and embarrassment did seem sincere, and seeking out the Tribune’s Chris Hine specifically only convinced me more. Andrew Shaw is a lot of things, and I don’t think super genius is one of them, but this may be someone not only trying to atone for past mistakes but trying to actively be better and better.

I say this as someone who made similar mistakes as Shaw. As I said when I wrote about this last spring when he was using that slur, in our first year on this blog (well, the old one) I called a player “Faggy McFagFag.” While that still makes me cringe, that hasn’t stopped me from writing about these issues since and trying to advocate for the LGBTQ community in hockey and elsewhere, in whatever stupid platform I have. Shaw has a bigger platform, if he indeed is trying to help and not just clean up his image, which is obviously the big fear.

Let’s face it, hockey on every level is still a backward culture in a lot of ways, and Shaw comes from that as we saw last April. But it’s going to take people from those ways and that culture to come back to it and say what is wrong about it, to connect to others who haven’t gotten there yet. A sort of “I’m one of you and we’re wrong” play. That applies to more than this particular issue, as well.

YCP is certainly nowhere near the be-all end-all when it comes to revolutionary organizations. It seems really good at PR and putting ads online and TV but actual change within the sport seems to be lacking. And again, no one’s sure this isn’t just more PR without actually changing a culture that still needs it. Skepticism with YCP and Shaw is more than fair. But I’ll allow for my skepticism to be flipped if warranted.

-It’s a critical time for all sports, not just the NHL, in the country we have today. Last night I saw some Twitter debates about how the NHL can’t have this “Hockey Is For Everyone” program and not come out and speak against the Muslim (depending where you’re from and whether our president has business interests there and/or there’s oil) Ban. And when I first sat down to write this post, it too was how the NHL and its players can no longer sit idly by and all themselves merely a distraction.

Certainly, the influence sports wields on our society, and really all over the world, can no longer be ignored or dismissed. We need look no further than the abominations that have been overlooked or covered up in the name of sports to know how important (dangerously so) they’ve become to people (have a seat over here, Baylor).

I wrote about this at Cubs Den on my weekly Sunday Anarchists’ Brunch (check it out sometime) a couple weeks back. The Cubs parade drew 4 million, and the Women’s March a quarter of a million. I’m not here to judge that and there are certainly reasons for both and that’s not the point. It was just to point out look at the platform our teams and leagues have. Real change could so easily sprout from there if there was the motivation.

However, if hockey players started speaking out, or really any athlete, I’m guessing a lot of us probably wouldn’t like what a lot of them would have to say. And most are rock stupid as they stopped going to school somewhere around 8th or 9th grade. And they don’t come from the same places that NBA or NFL players do, who have felt more compelled to be political recently because they know exactly what the problems are and are going to be in the near future. How many NHL players grow up dirt poor?

Still, the NHL can’t have this program about inclusiveness and breaking down prejudices and stand idly by while the country moves in the exact opposite direction. It can’t be “Hockey Is For Everyone…Who Are Allowed To Be Here Because Fuck THE OTHER.” In this one space, they certainly have leeway and perhaps a duty to be more vocal. 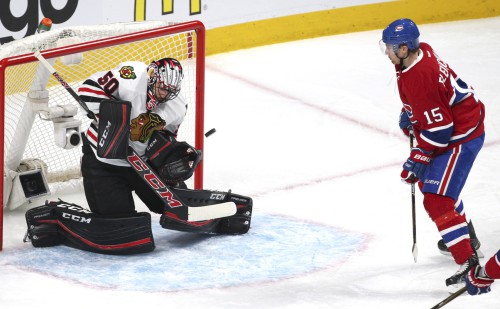 S**t Adds Up At The Bottom Lounge: CI Roadwatch This Thursday