So Ryan Stimson, a contributor to InLouWeTrust.com, along with our friend Jen LC has been tracking passing stats for the Hawks this year. This stuff is pretty interesting. We ran this in the Indian last night, but I wanted to share it here as well. Follow him on Twitter @RK_Stimson. It’s pretty dizzying. So buckle up.

Much of the analytics community focuses on shot-based metrics as a proxy for puck possession in order to get an idea of which teams and players drive play. However, the two most popular metrics for this analysis, Corsi (all shooting attempts) and Fenwick (all unblocked shooting attempts), merely tell us what happened, but give no depth into how these players drive play for their teams. I endeavored to find out how teams create offense from passes.

To do this, I track each completed pass that leads to a shot attempt and also from where on the ice the pass originated from. There are two types of passes that generate shot attempts: primary and secondary. Think of these like the primary and secondary assists handed out by the NHL on goals. These are same thing, only these are passes that represent no loss of possession between the passes and shots. So, if Duncan Keith completes a pass to Brent Seabrook, who then completes a pass to Patrick Kane, who attempts a shot, Keith would receive an A2 SAG (Secondary Assist Shot Attempt Generated) whereas Seabrook would receive a SAG for the primary pass.

With regards to the primary passes, there are a few more location categories. If the pass preceding the shot attempt originates in the defensive or neutral zones, this is a shot attempt generated in transition (seen on the charts under the D/NZ column header). SC stands for Scoring Chance: a pass into the “home plate” area in front of goal that results in a shot attempt.

By including a player’s time on ice and on-ice Corsi totals, we can look at how quickly players are generate a shot, are involved in a shot, and also how much of the team’s Corsi they contribute to. Lastly, we can identify the efficiency of a player’s passes by looking at how many shots he generates in proportion to the overall attempts he generates (SAGE, or Shot Attempt Generation Efficiency).

So, what does this look like for your Chicago Blackhawks? Let’s take a look at a little of what I do.

In the first pair of charts below, you’ll see how efficient the Blackhawks players are. All of this data represents events in 5v5 situations. 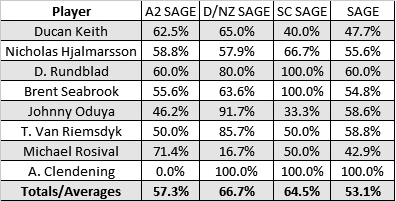 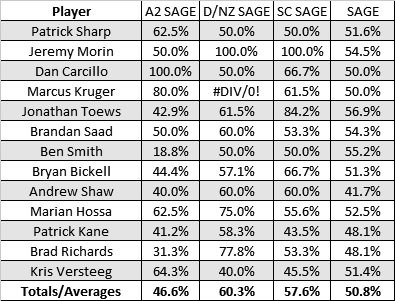 Again, SAGE simply means that of all the shot attempts that player generates, the percentage shown is how many of those attempts register as actual shots on goal. So, if we look at Duncan Keith, we see that 62.5% of the shot attempts generated from passing plays in which Keith made the secondary pass result in a shot on goal. The final row represents overall how efficient the position groups are, so you can see where individuals either fall below or exceed the positional average.

Why does efficiency matter? I’ve been doing this since the start of last season and there’s hard data to suggest how efficient teams are in generating offense may be more important than overall volume of shot attempts. Back to Hawks.

With regards to the defensemen in small sample sizes, David Rundblad and Adam Clendening have done okay passing the puck. Johnny Oduya and Trevor Van Riemsdyk have been most the efficient passers on the blue line, with Nicholas Hjalmarsson and Brent Seabrook just behind him. This is their overall primary passing efficiency.

For the forwards, it’s not surprise to see Jonathan Toews as the most efficient shot generator through primary passes. It may be a surprise to see Ben Smith as the next shot generator on the team in terms of efficiency. Brandon Saad ranks third. Toews is very good at generating scoring chances for teammates, and does quite well in transition as well. The only area he falls behind the other forwards is through secondary passes. Marcus Kruger, on the other hand, does exceptionally well in both secondary shot generation and primary scoring chance generation, though he has yet to generate a shot in transition.

How does passing relate to Corsi, you might ask? Let’s take a look.

These charts illustrate both how much and in what ways a player contributes to the team’s on-ice Corsi production. The first column shows the percentage of on-ice Corsi production that each player produces as a result of their own shot attempts (iCF). The second column does the same for their primary passes that lead to shot attempts (SAG). The third column does the same for their secondary passes that lead to shot attempts (A2 SAG). The final column simply adds these together and gives you one number that represents the percentage of Corsi events a player either attempts or generates.

This helps identify the true possession drivers on a line and on the team. As efficient as Toews is, he contributes less to his team’s Corsi production (41.8%) than, say, Marian Hossa (55.1%) or Patrick Kane (54.2%). This isn’t to say one player is better than the other, but simply allocates where the offense is coming from in terms of percentages. We can take it further as well using time on ice figures.

What you’ll notice is that Keith is involved in both Corsi and Shot events at a faster pace than all other defensemen. For the forwards, Patrick Sharp is the quickest to be involved in a Corsi event, nearly breaking the 1:00 barrier.

What does all of this matter?

The next phase in hockey analytics is looking at phases of the game and tracking data to identify what may be important and what may just be noise. We’ve seen the benefit of this through the work done on zone exits and entries. Identifying who are the shot generators and how efficient they are on each team is the next phase of the game that warrants our attention. 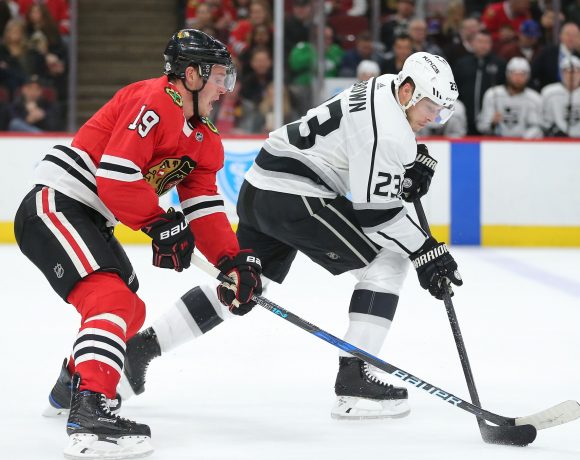 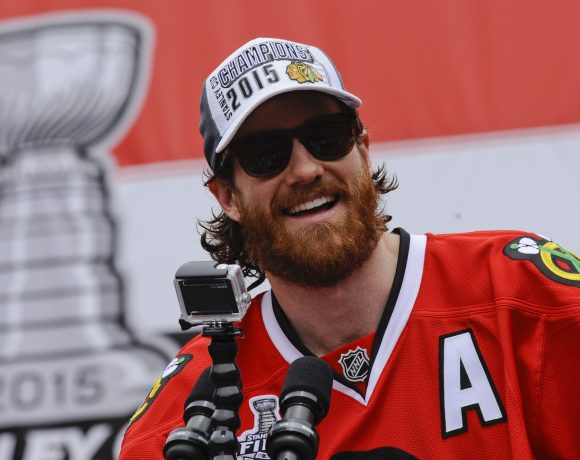