After failing to pull even a point out of a game for the first time in nearly a month, the Ramblin’ Boys of Pleasure continue the Western Canadian portion of the final Circus Trip tonight in Calgary, taking on an undermanned Flames group.

On Wednesday night, the Flames defeated the visiting Coyotes 2-1 in overtime, however in the process, lost star diminutive winger Johnny Gaudreau for a month-plus. While Gaudreau’s counting stats and peripherals (11 points in 17 games, a 48% share) aren’t on pace with his point-per pace of last year, the Flames would obviously rather have their franchise centerpiece in the lineup than not. And after getting off to the start that they have, even in what is an ever-softening Pacific Division, a protracted absence from Gaudreau could seal the Flames’ fate by the turn of the calendar.

Currently their leading scorer in goals, assists, and points is none-other than the erstwhile Michael Frolik, who has been a part of the Flames’ most consistent unit to this point of the season, operating on the right of statistical darling Mikael Backlund, and rookie red-ass Matthew Tkachuk (old man Tkachuk’s boy). Tkachuk has the size, hands, and pedigree that made him worthy of a first round pick this past year, and an unhinged streak a mile wide. He’ll have to curb the latter lest he become a bigger Andrew Shaw with a more famous name, or if he has loftier aspirations in the mold of Scott Hartnell or even his old man before he OD’ed on Crisco during the Great Lockout of Aught Five.

Another pairing of lottery picks in Sean Monahan and Sam Bennett will now form Calgary’s top line with Bennett getting the promotion in Gaudreau’s absence. In limited time together to this point in the season, the two have about a 61% share of the shot attempts, so Monahan isn’t completely helpless without Johnny Hockey.

On the back end, and as was touched on in the Dougie Spotlight, it’s taken coach Glen Gulutzan Glen Ross (or is it Glengarry Glen Gulutzan?) a while to come off the “Babysitter Template” that the Hawks execute to perfection during the 2015 post season, by trying to balance one solid, stable defenseman with a parking cone of a partner. The games of their top three of Mark Giordano, TJ Brodie, and the aforementioned Dougie all suffered, and he’s moved off of that by pairing Gio and Dougie, and punishing Brodie with having to cover for Dennis Wideman’s wanderlust. Brett Kulak has shown a little bit of promise on the third pairing, with a corps-best 54% share, but he’ll be saddled tonight with Deryk “$2.9 million AAV” Engelland, who offers not much.

Chad Johnson gets the start tonight in net, who after an iffy stint on the Island, is back to being a solid backup, posting a .915 overall and a .926 at evens, both of which are an order of magnitude better than what Brian Elliott has provided to this point in the year. But Johnson has been a backup his entire career for a reason, and those stats would be considered sub-par for most starters. And if Elliott can’t get his shit together, the more starts Johnson gets, the more likely the gap between his ceiling and “generic NHL starting goalie” is to be exposed.

As for the Men of Four Feathers, Tuesday night in Winnepeg was bound to happen sooner or later, and catching a young, fast team who had long circled that date on the calendar was apparently just the recipe for a bit of a course correction. Not that the Hawks didn’t have their chances throughout the game prior to the three goal outburst at the start of the third that sealed it.

Whether its out of a lack of other options or Joel Quenneville having to force himself to become more patient with the several young players under his tutelage, there are no significant lineup changes tonight left vacated by the concussed Vince Hinostroza, who claims to be fine. Mike Bossy (Redux) gets another look on the top line, where he was last seen mishandling passes and unable to keep the pace, while Ryan Heart Man slots down along side Marcus Kruger and Dr. Rasmussen, giving Jordin Tootoo the open fourth line spot. But look for Panik’s leash to once again be short, as Hartman has shown some straight line speed to be a puck-winner for Toews and Garbage Dick, and probably got the hook too quickly in the Habs game.

The blue line remains unchanged, though a vague naseau has creeped over the offices here over reports of TVR’s availability by the end of the trip. So enjoy these pairings while they last.

Corey Crawford gets the call tonight in net, with Vancouver waiting for Scott Darling tomorrow night. I’m sure both are thrilled with this arrangement.

With Gaudreau out the Flames lack their primary East-West threat for creativity with the puck, but Sam Bennett isn’t helpless. And with his choice at home, it will be interesting to see which forward line gets the Hawks top unit, as the defensive responsibilities will obviously fall to Gio and Dougie. Sean Monahan has given Toews all he can handle over the past couple of years, but Frolik and Backlund are far more specifically tailored for that kind of task. But either way, it will be up to Quenneville to find the matchups to exploit the likes of Widemann and Engelland without the benefit of last change.

And for the love of fuck, with this being their only trip to Calgary this season, please have the Flames wearing the retina-searing throwbacks tonight. Let’s go Hawks 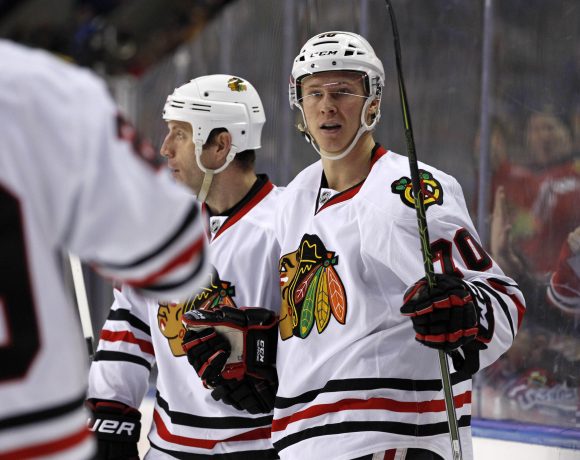