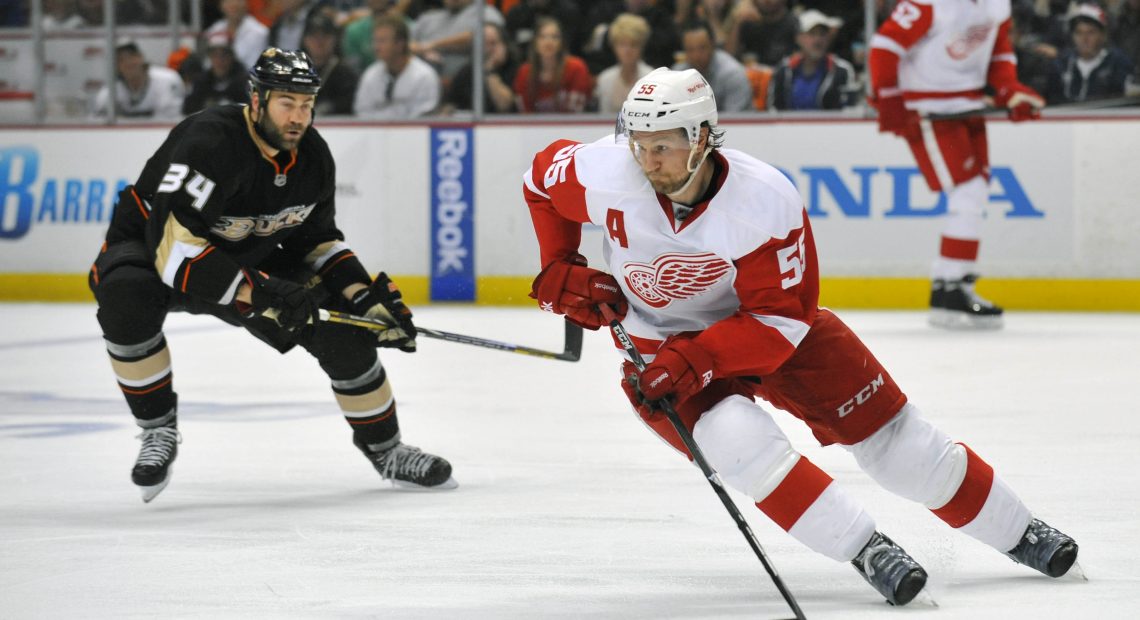 With the final installment of our team-wide preview of a team everyone knows pretty well anyway, we take a look at Scum’s special teams. And much like the rest of the team, there are still dragons here, but they’re not nearly as ornery or fire-breathing as they have been in previous years.

In the regular season, Scum’s power play ranked dead-center at 15th in the league at 18.4%, however they still scored 34 power play goals, good for fifth overall in the league. This is a function of drawing the second most opportunities (185) behind only Montreal (203), a hallmark of a well-coached veteran team.

In round one against the Ducks, much has stayed the same. The Wings have drawn the second most opportunities (25) and converted on 7 of them, good for a 24.0% conversion rate, fourth overall in the tournament so far. Now, some of this is as a result of the series requiring the full seven games, (for example, San Jose drew only one less opportunity in the minimum of four and scored 7 times), but the fact remains that if you give Scum enough opportunities on the advantage they’ll make you pay, and the unrelenting march to the box the Hawks took in Games 4 and 5 will make life needlessly difficult for themselves.

Structurally, the Wings keep things relatively simple, and it starts with their ability to win a draw from either Datsyuk, Zetterberg, or Filppula. The former two of those three are on the first unit, along with Johan Franzen up front, and Niklas Kronwall and Mikael Samuelsson at the points. Scum runs an overload/umbrella hybrid from the right side, with left point man and right handed shot Samuelsson drifting and awaiting one-timers on his off side, as that’s all he’s really good for at this point. Franzen parks his ugly ass in front of the goalie, while Dats and Z work a two man game from the half wall and goal line. They’ll often time switch off in the cycle, and when when the puck gets to Kronwall at the right point, whomever was occupying the wall drifts into the middle of the circle to create a double screen for the goalie, which is a commonly used Vancouver tactic. Furthermore, both Zetterberg and Datsyuk are more than capable of walking the puck to the middle of the ice both in the ring or on the goal line and taking a shot, with Samuelsson crashing down.

This system is mimicked on the second unit with Filppula centering Cleary and Nyqvist, with Cleary jamming the crease. Kindl and Brunner man the points for this group, once again with Brunner being the lone right handed shot drifting into space waiting to pull the trigger.

Limiting the sight lines and angles to the net for the right side of the Detroit setup will be key for the Hawks, as all of Scum’s primary play makers are left handed shots working on their off side. Since the Hawks haven’t been looking to take the aggressive approach on the kill all season in sprinting out to front the puck carrier, look for the PK corps to collapse in the mid slot area to cut off cross-ice bids as well as take away shooting angles. And don’t expect anyone in an Indian head to engage in a physical battle with the crease-crasher, as the Hawks have shown they’re not particularly interested in doing so as a matter of scheme. This will undoubtedly lead to at least one Franzen goal and a guy with a mustache in your section bellowing why KEIT DINT TAKE DA BODY.

By the numbers, the Scum PK once also midland in the regular season, killing off 81.7% of all opportunities against, good for 12th by percentage, or 17th by goals allowed with 30, and were 19th in the league with 164 times short handed. This was offset by 3 shorthanded goals.

Things were no better in the first round, giving the Ducks 24 opportunities and allowing 7 conversions, which is a disgusting 72.0% kill rate, good for dead last among teams that remain, with only Vancouver and the Isle worse among the 16 overall.

This is not your grandpappy’s Wing penalty kill, and perhaps the place where Nick Lidstrom’s absence is felt most. As arguably the most positionally sound and savvy defenseman ever, those attributes were allowed to shine on the kill. With this current lot, led once again by Niklas Kronwall and Jonathan Ericsson, their positioning can be abstract at best.

Not helping matters is that Jimmy Howard and his wonky hammy’s save percentage on the kill dipped from a regular season mark of .863 to an even ickier .821. Whether this is as a result of higher quality opportunities yielded is debateable.

The Wings as a whole do have some very smart and adept penalty killing forwards, led as usual by Dats and Z, as well as Dan Cleary, so it will behoove the Hawks to work a things down low, below the hashmarks and rather than having Duncan Keith blast shots into shin pads and attempt slap passes to no one in particular. Keeping the likes of Toews, Hossa, and Kane working out of the right corner to isolate whatever defenseman draws the assignment should create lanes for passes, and or at the very least stuff plays designed to put Howard’s hamstring to the test. If there’s an opportunity for the Hawk power play to get right, it’s in this round.