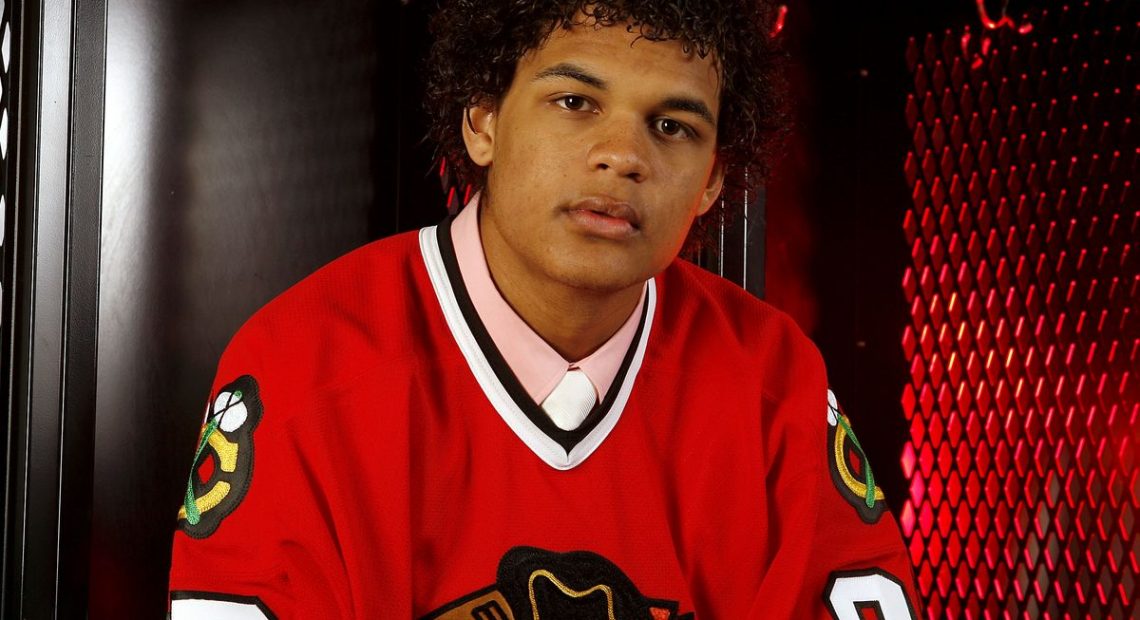 This is going to be the major story in hockey today, and it wouldn’t not be shocked if Bill Peters is fired by the end of business today. We’d like to believe it would lead to a reckoning in how hockey coaches are viewed, judged, and forced to change, but nothing works like that in hockey.

So the headline and how it relates to the Hawks first. Akim Aliu, a former Hawks draft pick, on Twitter last night was commenting on Mike Babcock’s firing when he connected it to Bill Peters, who served as a Babcock assistant for three seasons before taking the Carolina job. In those tweets, which you can see here, Aliu alleged that Peters called him the n-word several times. When Aliu rebelled against Peters, as he should have, Peters requested to the Hawks brass of GM Stan Bowman and President John McDonough that Aliu be sent to the ECHL. He was.

The Hawks released a statement today: 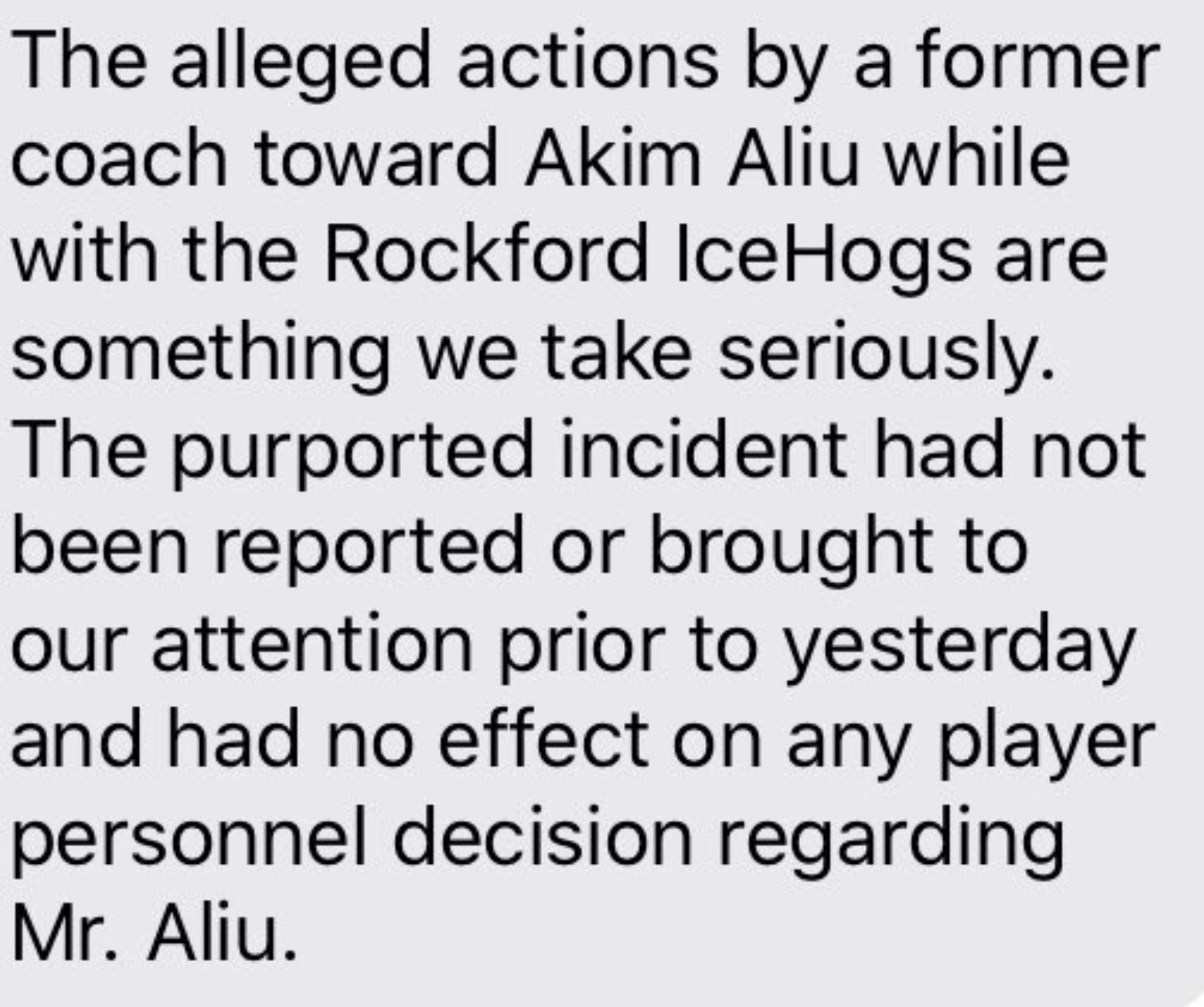 The Notes App press release is a nice touch.

Right, so first the Hawks. They’ll have plausible deniability on this, which doesn’t mean they’ll totally skate, or more accurately should. What they’ll say is they got a letter or request from their AHL coach, who of course wouldn’t mention what actually happened, and they took his word at the time.

Which is obviously bullshit, because they should have been doing due diligence on what was really going on. The challenge for the Hawks then, as it would be now, is hockey’s over-entrenched “stays in the room” culture, which would have made it utterly impossible for them to get corroboration from any other player who would be reluctant to speak against their coach. It’s just not done in hockey, not even now. It’s why all this Babcock stuff is coming out now instead of when it was happening, likely because no player would confirm it while Babcock was still employed (or the Toronto media is a bunch of sycophantic chicken shits, take your pick).

Still, what’s clear is the Hawks probably should have done a little more than simply taking their coach’s word for it. What some will rush to point out is that Akim Aliu was always considered a malcontent or having an attitude problem. Most of this stemmed from his refusal to engage in stupid and demeaning hazing rituals for his junior team, which led to rocky relationships with his team for his entire junior career. We could do a whole other post or six about the backward and disgusting culture of junior hockey, but let’s save it. We do know that Aliu’s refusal to “conform” to what was considered normal behavior in junior poisoned his whole time and every relationship there, because Canada and hockey are basically fucked in the head. There was talk he was disruptive in Rockford too at the time, and now we know why.

There were some NHL players on that Rockford team, including one Corey Crawford. You can bet McDonough has made sure to get to Crawford well before any media availability today (and as Crow is likely starting tonight, he wouldn’t be available anyway and now you can bet he’s starting tonight) to make sure they control the message.

Though it was only 10 years ago or so, and this is hardly a justification, it was a different culture then. The Hawks probably didn’t do anything out of the ordinary, no matter how much the claimed they were different, than what any other team would have and just took their guys in the AHL’s word for it. They’ll probably show a fair amount of contrition today, whoever decides to get in front of the cameras and mics. “We didn’t know,” “We should have looked into it further, “won’t happen again,” is probably the gist of what you’ll get today.

Throw it on top with everything else you’ve seen the Hawks do this decade (Ross, Kane, Reiff, Shaw, etc) and you can see what they’ll do to control any narrative from here. It also doesn’t extend them much benefit of the doubt if any.

As for Peters, he should be done in hockey forever, and if anything starts coming out in Carolina he certainly will be toast. It’s becoming less and less of a mystery how the Canes went from consistently disappointing to conference finalists as soon as he was gone, and you can see the cycle in reverse for the Flames. Already another former Hogs player is coming to back up Aliu and the story of Peters being a real piece of shit.

There’s no doubt Peters isn’t the only one of these in NHL, AHL, NCAA, or CHL ranks and probably in youth hockey too. Some will say it’s just being a tough coach, but that’s horseshit and you know it. There is no place for the likes of Peters and what Mike Keenan was back in the day, and we know better now. It’s not coaching, it’s posturing. It’s bullying, especially in a culture where any player who rises up against a coach is still considered the problem and a pariah. You know where hockey media almost always sides on these things, or at least used to. No one cares until the results turn sour. Frankly it’s abuse.

Hockey will do well to use this as a platform to start cleansing itself of this kind of dickheadedness. If I know the NHL and hockey, it will use it as an opportunity to stick its head in the sand. 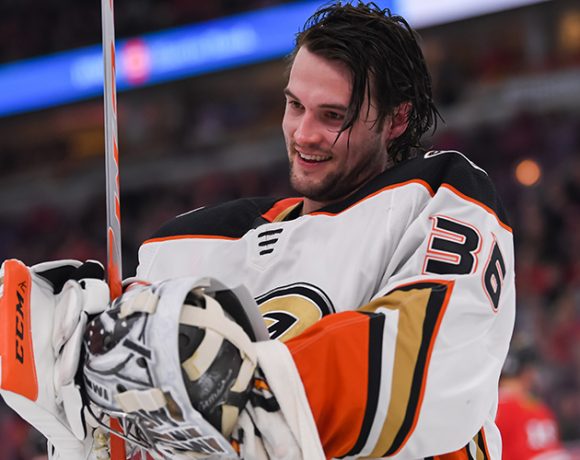