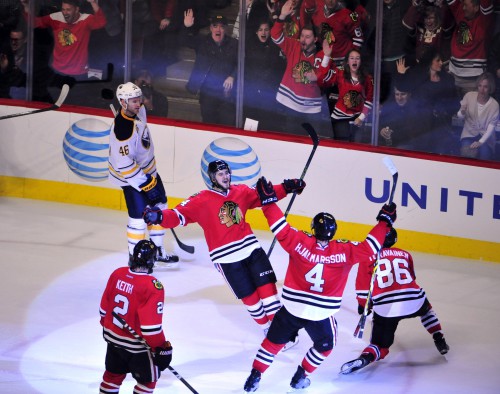 The Hawks moved to their sixth win in a row with a simple adjustment after 20 minutes, or at least a tightening of their usual plan. But even though the Hawks basically kept the Sabres under their thumb (it’s down to me) from the start of the second, they let them hang around and hang around. And as the Hawks should know by now, they can’t let any team hang around that has Ryan O’Reilly on it, because he will score against them. Luckily, a few minutes later Rasmus Ristolainen let Phillip Danault have far too much space entering the zone, and Danault was only too happy to gobble it up and bury the winner short-side. Throw in another Toews empty-netter to throw the mainstream off his scent of struggles, and you have yet another Hawks win.

The Hawks probably didn’t expect a Dan Bylsma team to come in and trap, especially considering how the Sabres were right with the Hawks when they played in Buffalo. But that’s what the Sabres were doing for the first 20. Combined with the Hawks conceding their blue line a bit too easily which let the Buffalo wingers Braveheart their way right down the middle to the net, and the 1st was pretty even with only Hammer finding the net.

Starting in the 2nd the Hawks’ d-men stepped up on their line, causing either turnovers or dump-ins, and there were more than enough of the former that the Sabres couldn’t set up that trap as often. The Hawks d also sat up higher in at the other end, trying to keep the Sabres pinned and forcing them to just chip and fling the puck out which also kept them from getting a trap set up. This is why the Hawks outshot the Sabres 34-18 in the last 40 minutes. This is how the Hawks get their D active in the rush and the offensive zone.

-The headliner coming out of it will be Danault’s goal where he showed a burst and finish that you would expect a 1st rounder to have. The coaches will be more impressed by a play in the 2nd where he stripped and held off Evander Kane and got a good shot off. As we’ve said before, the Hawks will take a player who is in constant motion and hunts the puck down like it owes him money even if it comes with some mistakes. They can shape that. It’s why Shaw is so loved, same with Kruger, and it’s why other kids have failed. They don’t want you to sit and wait around and guess. This is why Danault is almost certainly here to stay. Throw in the offensive instincts that Kruger simply doesn’t have, and you have a very interesting player on your hands. Though the #24 with the unshaven mug and flowing brown lochs… some of us still see Marty for a flash.

-Gustafsson set up the first goal with a lovely touch pass as the Sabres lost Hammer coming off the bench. I think we can safely say that Gustafsson game in the other teams’ zone is pretty solid, as he’s shown advanced vision. Jury is still out on what he can do in transition and his own zone, but the first part is something the Hawks needed more of that he’s providing.

-Toews seemed more intent on trying to beat players with the puck than I remember seeing for most of this season. Maybe it’s part frustration. Maybe it’s realizing his line has to do more. Maybe he thinks he needs to create more space from Hossa. We’ll see if it continues.

-The Hawks won a game where the SuperPAK line didn’t score. Nor did the power play. A rarity.

-The Hawks outshot the Sabres by 16 and yet it still feels like Crow had to make nearly as many big saves as Chad Johnson did. Whatever, he’s making them all these days anyway. Or maybe I just notice Crow’s more because of how much I’m enjoying watching him play this season.

-Rob Scuderi was still somehow -7 in Corsi against that outfit. He’s nothing more than a regular season platoon partner for Rozie, but still, my lord.

-The 4th line once again didn’t crack seven minutes. I doubt either Garbutt or Bickell are going to play themselves back into Q’s good graces. Teuvo and Danault are playing too well together to have 86 slide to center. But surely Ryan Hartman is worth taking an extended look at over either of those wingers?

That’s it from here. Onwards…

Game #38 – Hawks vs. Avalanche: Lineups & How Teams Were Built