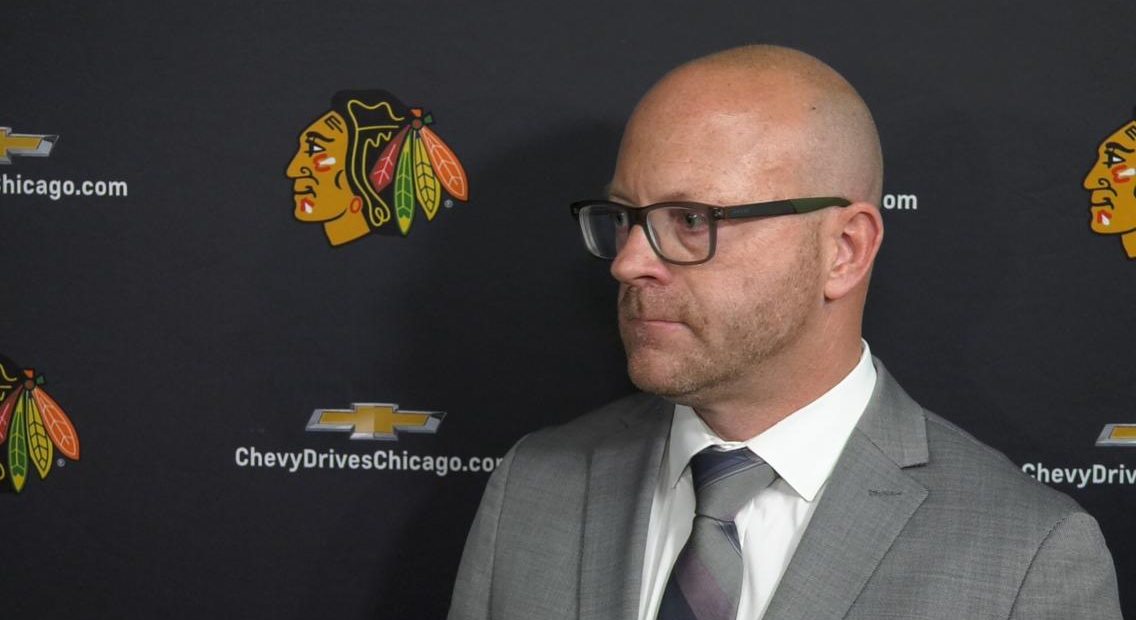 I should admit right at the top I always had a distaste for No Doubt, which is saying something as I was 13 when Gwen Stefani hit the scene and that really should have been enough for any boy that age. It wasn’t. I guess I’ve never been happy.

I won’t be the first to point out that it’s awfully curious, or perfect in another sense, that the first time Stan Bowman was publicly available to the media is halfway through the season and when the Hawks had gone 7-3-0 during a 10-game stretch. Something about GMs in this town. You can’t find Ryan Pace with a strike team during the season. I’m not sure GarPax knows where the media room is. Only Hahn and Epstein seem to be around for you whenever, but maybe that’s just the nature of baseball and being there every goddamn day.

Whatever Stan had to say, and we’ll get to it, should be couched by this fact: though the Hawks had won 7 of 10, they were still six points out of a playoff spot before last night’s game with three teams to leap. The current last wildcard holder (Winnipeg) is on pace for 95 points. The Hawks would have to amass 51 points in their last 38 games to get to that mark, if that’s even enough by the time we get to April. Or like, 23-10-5. Basically at a 30% higher pace of points-per-game than they are managing now, and that’s with the added injuries.

The Hawks are wedged in the standings between two teams that fired their coaches. Two teams that think where they are is unacceptable. It’s important to remember all of this.

“I think we’ve played our best hockey, probably over the last couple weeks, looking at our record,” Bowman said. “It did take a little bit of time to get everything together. We did have spurts of it earlier in the year where we played well, but we couldn’t sustain it enough probably to get enough wins on the board. We’ve played better lately and now we’ve got to build on that, so consistency is probably the hardest part to nail for this team so far. Because we show when we play the way we want to play …”

I’ve been harping on this all season, but it’s infuriating to hear the team still fucking cling to this. The Hawks are not bad because they are inconsistent. They are inconsistent because they’re bad. There seems to be this delusion around the whole organization that some devine force is going to descend from the heavens and bestow them consistency. I hate to keep pulling out this GIF and repeat myself but it seems to still apply wholly…

Either the vets are simply too old to give you 82 games of dominance (Keith, Toews, Crawford), or the kids are still learning (Dach, Boqvist) or are simply not that good (everyone else). The way this team is constructed, they basically have the equal amount of players who will improve and grow and those who will continue to decline, which is a great way to remain right where you are.

“…we’ve had pretty strong goaltending all year, so that’s been the bright spot for our team, given us a chance even some nights when we didn’t play well at all we would have a chance to come back and win some games.”

Here is something that should be keeping Bowman up at nights, if not gotten him fired already. It’s the SV%s of the teams around the Hawks in the standings:

Over in the East…

What this should mean to Stan, or any right-thinking human getting the requisite amount of oxygen, is that the rest of the team is an utter disaster when you’re getting contender-level goaltending. In the NHL, that’s really supposed to be about 75% of the battle. If you fuck that up, you’ve really accomplished something wondrous. Stan talking about the goaltending isn’t him extolling the virtues of his team. It’s providing rope they should have hanged him with long ago.

“Well, we’re right there,” Bowman said. “We’re a little bit behind the pack — a couple points. But it’s a pretty tight pack that are fighting to get into that spot. It’s been basically half a season. We’ve got a lot of hockey left…”

I understand that the Hawks have to sell the rest of the season, even though they have the sellout streak and there are good seats still available every game (still working that one out). So Stan can’t come out and declare that they’re toast. Still, six points out of the playoffs is miles away. MILES. Three teams to leap, and you just lost another game to a direct competitor (which I guess the Flames are right now). The Hawks have more regulation wins than seven teams. Seven. Right there? Where is right there? If this were a woman telling you you were right there you’d know for sure she was faking.

“There’s a lot of teams that are going through injury troubles,” Bowman said. “The encouraging thing is seeing how our guys have responded with having a lot of established veteran players (out). They play a pretty big role on our team and they’re all out, but our team’s found a way with a different group, a different mixture here, to get some wins. That’s a good sign.”

““We’re not focused on past years,” Bowman said. “We’re looking at this year where we are right now. We’ve had a pretty good stretch recently. We’ve got to continue to do that. If we’re able to build on the way we’ve played the last few weeks I think we’ll put ourselves in a nice spot over the next month.”

Not focused on past years, eh? I don’t even know what to do with this, so I’m just going to leave it alone. And you’re not going to build on how you’ve played the past few weeks, because your team has spent the past two seasons proving that it can’t.

“The focus right now is to just stay in the present and look where we are and build on these next few games and keep going.”

And here’s the big problem. The Hawks can’t focus on the right now. Focusing on merely the right now, and not even correctly, is how you get the slapdash offseason of throwing de Haan, Maatta, and Lehner to the wall, trading Jokiharju and then ending up with the playing time he would have needed and deserved but not having him here to take it. Having no sense of a long-term plan is how you end up continuing to kowtow to Seabrook until you have no choice but to send him to a farm upstate to avoid further embarrassment. You can’t just keep focusing on now, because it’s your job to map out how the Hawks get back to the top in the future. And they’ve done exactly none of that.

This blog is over.

Tags: Chicago Blackhawks I can't take much more of this Stan Bowman