In its infinite brilliance, the NHL schedule makers have once again knocked hammered out an interconference season series in the span of 28 hours, give or take with the time zone differential. Naturally tonight’s telecast will be the one that is nationally broadcast as a RIVALRY game, one which will likely feature the very telegenic goaltending of two backups, which seems appropriate given all of the announcements surrounding the All Star Farce earlier today.

Obviously not much has changed since yesterday’s game, assuming that Jonathan Toews is good to go after apparently being cut during his lone shift in overtime. Prior to that, at evens last night Pens coach Mike Sullivan mostly sent Geno Malkin over the boards against Toews, while Crosby got the Russian assignment. Toews and Geno mostly drew even, while Sid kicked the Anisimov line’s skull in. Look for Toews to get much more of a look at Crosby tonight, and possibly for the gradually improving Philip Danault to get a look or two at Geno.

On defense it seems that TVR is going to continue to see time on the third pair with the platoon of Scuds and Rozsival as Erik Gustafsson is given a look with a permanent, albeit bloated, partner in Brent Seabrook. Seabrook’s troubles are worth monitoring, as he’s cycled through three pretty regular partners at this point and is below water in possession for the first time in his career under Quenneville while getting most of his starts in the offensive zone. Eight more years, hooray.

With no morning skate today, it’s fairly safe to assume that after an overtime win in which he had to be the difference that Corey Crawford will get a rest in favor of Scott Darling. Darling’s home and road splits are well-worn territory but they bear repeating – .964 at home, .892 on the road. And goals like the ones to McLeod and Johnson last week simply cannot continue to happen.

With last change at home the Hawks have a better opportunity to keep a lid on Crosby, Malkin, and Kessel and allow the Teuvo-Danault combination to run wild against whatever the bottom of the Pittsburgh roster is if they so choose. But Darling still needs to make it stand up even if they get the better of the play, something he has not shown consistently this year. Whether it’s Fluery or even Jeff Zatkoff he’s standing across the ice from, there is gap he’ll have to close. And most of the time for Darling that gap is the five hole.

If you’re heading to tonight’s game, pick up a copy of our gameday program sold outside the UC. If you’re not, you can get the digital version right here. 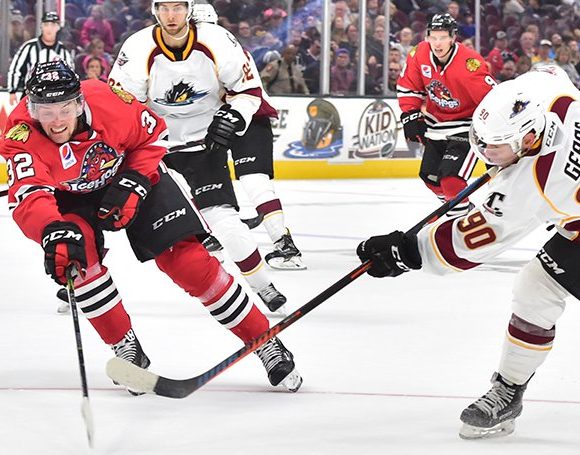