Since opening in 1994, the Stanley Cup has never been in the United Center with a series on the line even in the renaissance era of the Blackhawks. It was 23 years ago when it was last in Chicago, June 1st 1992 when the Penguins complete a sweep of the Hawks at the old barn. The last time the Hawks had the ability to claim the chalice themselves was May 18th, 1971 in Game 7 against the Canadiens. A game that those who remember will never be able to fully forget. The last time the Hawks actually won at home was April 12th 1938, and even then, the Cup wasn’t awarded to them that night after the final horn. No, the last time the Hawks actually hoisted the Holy Grail on home ice was all the way back to April 10th of 1934, 81 years ago. That’s so long ago that the Cup itself doesn’t even look as it does now. But all of these counts can revert back to zero with a win over the Lightning in Game 6 tonight.

For the Lightning, they are rapidly running out of options and bodies as this series progresses. Nikita Kucherov took the morning skate and is listed as probable for the game, though the actual degree of his health remains open for debate. And with Tyler Johnson still clearly carrying some type of arm or hand injury, having four effective arms between the Triplets is sub-optimal at best for Jon Cooper. Kucherov’s departure for injury early in Game 5 forced Cooper into having to jumble in other forwards with Johnson and Ondrej Palat, and it was mostly Steven Stamkos and Jonathan Drouin, who dressed for the second time on Satruday. Even in getting him new linemates to work with and at the center position, Stamkos still sits at a solitary assist for the series. But such a talent absolutely cannot be held down forever, and relenting even the slightest could result in a building offensive explosion. For their part, Stamkos’ two linemates in Alex Killorn and Valtteri Filppula are doing a fine job at driving play and are responsible for the Bolts’ last two goals. They are half of the only four Lightning forwards getting the better of the shot attempt ledger in the series, with the other two being Ryan Callahan and Cedric Pauquette. And in not being able to decide the matchups tonight, at the very least Stamkos will see some combination of the Hawks’ top four defensemen nearly every shift he’s on the ice.

On the blueline Victor Hedman continues to be an all around force no matter what situation he plays in, and in whatever matchups come his way, though it’s mostly been Patrick Kane he’s seen all series and has held him to a lone assist. But the question becomes why Hedman did not even play 24 minutes in Game 5 wherein the Lightning spent the majority of the game playing from behind, and the rest of the defensive corps have offered little to nothing in terms of keeping the puck out of their own end.  Without the benefit of last change, it would stand to reason that Hedman could play half the game or even more given the situation in the series, and that Jon Cooper has been conserving his minutes for just such an occasion. It will be something to monitor throughout the game.

Despite his walkabout in the first, Ben Bishop certainly looked more comfortable and mobile in net in Game 5 than he did in Game 3, and was able to make himself look huge to shooters on every clean look they got. Teuvo in particular had two opportunities where he had a lot more time than he thought he did, and fired the puck wide of Bishop trying to pick a corner on the 6’7″ netminder. But even in spite of his improved performance, it’s doubtful he’s fully recovered from his mystery ailment, and getting him to move laterally while on his skates opens up holes in the equipment to shoot through. His sterling 8-3 record with a .947 save percentage on the road, as well as his two shutouts at MSG, will most certainly be harped on in the broadcast from jump street, so once again the Hawks will need to put a volume of shots on him to get the number of chances necessary.

As for our Men of Four Feathers, the lineup tonight will be the same as finished in Game 4 and remained throughout the course of Game 5. That means the the Doghouse Line (or Killer V’s, whichever works) of Versteeg, Vermette, and Teuvo will get an opportunity to show that Saturday wasn’t a fluke. Versteeg in particular played fantastically, which of course means the dangling sword above everyone’s neck for the inevitable devestating blue line turnover at his hands. But with last change, Quenneville should be able to get them out against the bottom pairings of Tampa, who have not been able to handle much of anything all series. The same goes for the fourth line, where Andrew Shaw showed exactly why he is far better served on the wing on Sunday. He, Kruger, and Desjardin will likely take whomever in the top six isn’t slotted against the Toews line, and do so with their usual overflow of defensive zone draws. And if Victor Hedman isn’t double shifted, there’s a high likelihood that at least one of the two top lines will be heard from tonight, as just like Stamkos, neither Toews or Kane can be bottled forever.

There will be no changes among the defensemen either, despite the fact that Trevor Van Reimsdyk has had a rough go of things for the past two games. Some of that was to be expected on the road, and he and Kimmo Timonen should get the advantage of offensive zone draws for the times that they’re out there to give the top four a breather. Either way, with the game guaranteed to be as tight as the series has been to this point, don’t expect Joel Quenneville to push Duncan Keith’s tank all the way down past E.

In net Corey Crawford has been solid in two straight games stemming late pushes by the Lightning and kept the games from going past 60 minutes. He had his own issues playing the puck on Saturday which led to the Kucherov injury, so he’ll once again need to keep his sightlines on point to be able to stop what he sees. So far he’s been able to do just that, and the Hawks need him just to provide one more game of that caliber of performance while maintaining what has been exemplary defensive zone coverage.

While common wisdom would point to the Lightning coming out and flooring it from puck drop, that could end up backfiring in only amplifying what will already be an absolutely insane UC crowd. The past two games the Bolts have tried to use a modified trap to gum things up a bit to allow their large defensemen to stand up Hawk forwards at the line, and that might be the best tactic they have in the hopes that Ben Bishop remains as solid as he’s been on the road. But Jon Cooper has already shown a propensity to try to outsmart everyone including himself, so it truly is a coinflip as to which extreme he’s likely to employ.

But on the other side of things, tonight is now what the last 54 weeks have been completely about. A fixation on making amends for a blown opportunity last year, especially on home ice, the scene of that crime. No one in that room from last year forgets, and they are not going to let it happen again. Tonight isn’t just about this season and last, but it can become about historical context as well. And the only way the Hawks get to that point is to take it upon themselves to put themselves there. There is no shying away from the brightest of lights if this level is to be reached. This is what they have always wanted. This is the standard they hold themselves to. And this is now what needs to be seized, hoisted, and engraved. There are few even alive the last time the Hawks did what they could do tonight on home ice, and even fewer likely remember it or saw it themselves. And only they can change that. Let’s go Hawks.

If you’re headed to the UC tonight, make sure to pick up a copy of our gameday program sold outside at all four corners of the arena. We are outside Gates 2 and 3, and on Wood and Monroe and Damen and Monroe. If you’re not, you can pick up the digital copy right here. 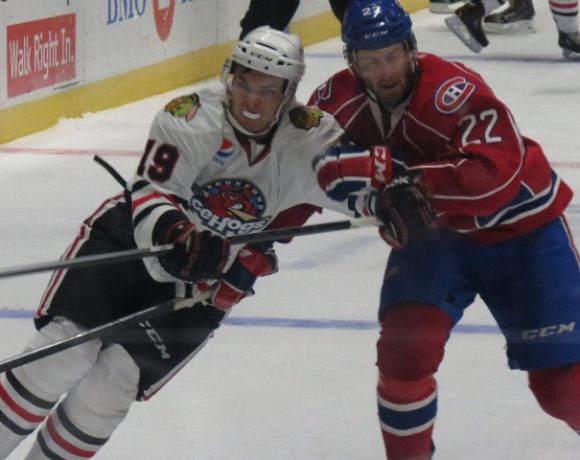