Duclair! Get Your Ass Out Here You’re Holdin’ Up The Show!

You’ll just have to take my word for it, but just a couple days ago and Matt McClure and I were wasting time instead of working as we usually are doing, we speculated about things the Hawks might do trade-wise. We know Stan Bowman has usually preferred to makes his moves before the deadline, when prices are a tad cheaper and there’s less competition. That’s how Michael Frolik came here. You add in the fact that the Hawks might not be able to wait until the deadline because of the shape they’re in (oh you don’t know…) and you can see why there was some urgency here. We thought the Hawks weren’t going to give up any real pieces or make a big splash, and the beaten favorite is something they love to try.

We said Anthony Duclair seemed like a likely target.

Well, we got one right. Anthony Duclair is headed to Chicago along with Adam Clendening, the prodigal son, in exchange for Richard Panik and Laurent Dauphin.

The headline here is Duclair, who somehow is still only 22 even though you’ve been hearing his name for years. The attraction to Duclair is obvious. He’s swift, and though only 5-11 plays a much bigger game, and there is a high amount of skill here. This is a player who managed 20 goals at age 20 in Arizona, where he was on the top line and facing tougher competition than he probably should have because quite simply there wasn’t anyone else to.

The red flags are clear, though. He followed that season up with a barf-belch of a ’16-’17 that saw him get sent down for a portion of the season. Duclair has nine goals in 33 games this year, which is not nothing, but there is more to be mined. If he wants it to be, which seems to be the rep with him. The Hawks are right in thinking that if he can’t put it together here, especially with a coach showing new patience in young players, that it’s never going to happen.

Duclair’s best season two years ago came while playing with Max Domi, and there are options for him to do that here. He’s a left shot so playing him with Kane doesn’t really add up, but he could be hellish on a forecheck with Saad and Toews or give DeBrincat and Kampf/Anisimov more to work with than Sharp. It would sadly keep Top Cat on the right side when he should be on the left but Duclair can flip as well.

All of Duclair’s metrics this year are well ahead of the Yotes’ team rates, though that really isn’t much of a claim. More encouragingly, Duclair’s scoring rate at even-strength is the highest of his career right now, at 0.84 per 60. He’s also averaging more attempts and individual scoring chances at evens than he ever has, and more shots. He’s not quite getting the luck shooting-percentage-wise at evens that he did two years ago, but the process is there if the results are not. And oh yes, he’s averaging way more hits per 60 than he ever has, if you’re into that sort of thing.

While it would be fun to sit here and laugh about how Richard Panik turned into Richard Panik again, the reality is the Hawks got him for basically nothing (we still love you, Jeremy Morin), turned him into a younger, cheaper, more talented player that can be part of the solution for a long time here. You can’t argue with that.

The two minor leaguers won’t matter. Laurent Dauphin showed a little in the preseason, but either didn’t show enough in Rockford, or Kampf has shown enough to leap ahead of him on the depth chart, or they’re now convinced Schmaltz is a center which locks down three center spots on the big club for the foreseeable future, or all of the above. Clendening is Rockford depth, because I have to imagine Gustafsson or Pokka or both are going to be involved in future deals. If they were going to be anything, we’d probably know by now.

There is risk in this. You can see similarities between Duclair and Tomas Jurco, though Jurco never had the success in the NHL that Duclair had two years ago. High-talented guys who have just not put it together full-time yet that teams are ready to move on from. If motivation or focus is the problem, sticking him in that dressing room should be a cure he’s looking for. We’ll excuse him if he and many others didn’t quite bring it while playing out the string in the desert in front of friends and family only. He’ll get no such luxury here.

It has potential to be a blockbuster deal. If it’s the opposite, Duclair goes RFA in the summer and you have all of Panik’s cap space to play with. So… why the fuck not? 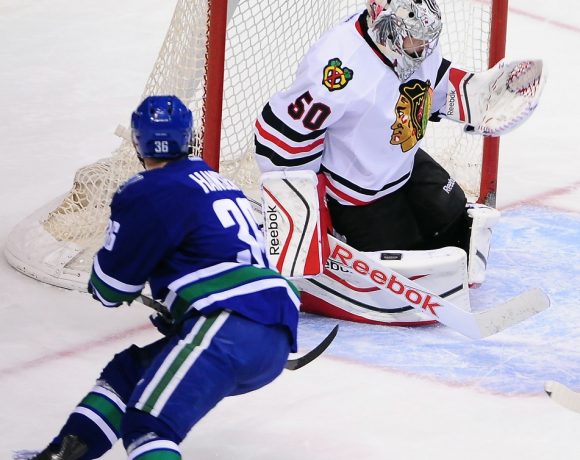 Forward My Mail To Me In Hell: Hawks at Wild Preview/Pregame Thread/Bonfire Building