Everyone Knows This Is Somewhere 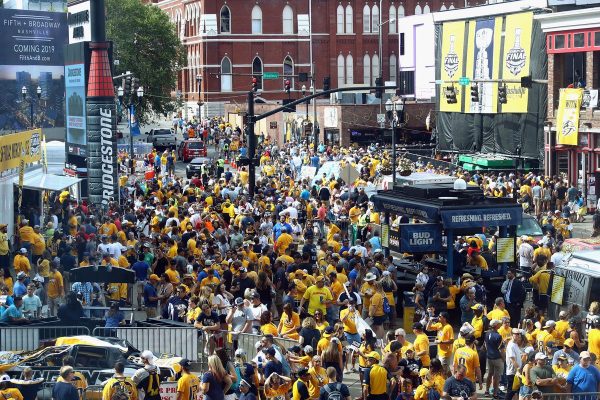 The Stanley Cup Final’s first visit to Music City resulted in the largest explosion of think pieces from national hockey writers expressing amazement that anywhere below the 49th could show such passion for the sport. It was rather hilarious in its naivety and its patronization. But that’s kind of what the hockey media specializes in these days.

This blog followed the Hawks down to Nashville in 2012. Neither of those versions of those teams were all that impressive. The Hawks got smoked by the Preds that night, as Corey Crawford delved into his one and only case of the yips in his career. And we all had a blast down there. It didn’t matter. It’s amazing what happens when you put an arena right in the middle of everything, especially in a place like Nashville which never needs an excuse for a drink and a time.

There’s a reason so many Hawks fans flocked there that they had to try and put in rules to stem the tide. And it’s not because Nashville is all that close. It’s because it’s been that much fun for a really long time now.

Bridgestone Arena has a couple advantages over other places that make it such a wild night. One is the aforementioned location. Being on Broadway in Nashville is basically being hockey’s Wrigley or Fenway, except those neighborhoods developed around the park (some of us are old enough to remember when the area around Wrigley was decidedly “not great) instead of the other way around in this case. Second, it’s not that big. While the stated capacity is 20K, and I find that curious, there aren’t multi-levels of suites pushing the seats farther and higher and the ceiling as well. I sat in near the last row of the stadium when I was there, and it still felt like I was on top of things. Friend of the program Jay Zawaski was wishing the UC would ever reach the volume that Bridgestone does, but I don’t know if it’s structurally even possible. Even if all 22,000 screamed their head off for 60 solid minutes, the sheer mass and open air of the place probably wouldn’t allow for it.

The Preds also happen to be the only game in town. The Titans have been a joke for a while now, and that’s the only other professional team in town. Even the local colleges don’t really rally the town together. Vanderbilt has been a pretty shit-assed basketball and football program, and even ol’ Rocky Top down the way hasn’t done anything of note in a long time. It’s been a long time since Nashville could rally this strongly around anything. Contrast that to here when there was far less buzz for the playoffs post-Cubs-win than I can remember, and it basically disappeared after losing just the first two games so everyone could start screaming to send Schwarber down to Iowa.

And why this has shocked the media that descends on a Stanley Cup Final, I couldn’t tell you. There’s always amazement  that any place could show the passion of any Canadian city, even though Nashville is just as big as Winnipeg or Vancouver or Quebec City which they’re all clamoring to get a team. And growing. They smile and seemingly want to tussle the hair of everyone in the market, as if somehow it’s not officially a “hockey town” until they get a seal of approval from the Toronto Sun or something.

All it does is reinforce how the NHL and those who cover it basically ignore every team other than like 10 of them. The Preds have been a playoff team six of the past eight years. Or 10 of the past 13. How many teams we see regularly can’t boast that? The Flyers for sure. The Canadiens have the same. The Preds now have more conference final and Final appearances than the Capitals in the past decade. It’s actually a better playoff record than the Bruins. They’re certainly more relevant than the Wings and have been for a while. And they’re probably not going anywhere.

I wish the result of all this would be every NHL arena trying to figure out how to create anything resembling the atmosphere of Nashville’s, no matter what you think of how mature their chants and songs are or not. But sadly, that kind of thing has to happen organically, because what we’re getting if anything is just more piped in things and more manufactured fun. Basically more “Noise Meters” and “Get Loud” graphics. Soccer this will never be.

Maybe we’ll get lucky in the next year or two, and we’ll get a real juxtaposition of what happens when you turn your entire building into a corporate outing and when your fans show up when the Leafs and Predators meet in the Final. What will the Canadian writers think then?

Tags: Atmosphere Bridgestone Arena Broadway it could only happen there Stanley Cup Final