Where to begin….How about here –

Remember when you all wanted to hold a festival in the desert and light Kris Versteeg on fire?

Of course you do. Stan Bowman would have joined you. So would have Joel Quenneville and 29 other NHL general managers. Ya know, just to see what it was all about. Uncle Bob was tweeting for the majority of the summer that the Hawks were actively shopping Versteeg but teams were requesting actual value in return if they were going to take on his contract.

So before you get started on poo-pooing fans for bitching about Versteeg last year, let’s recall what everyone else employed by NHL teams thought about him. The Hawks waited until the pre-season to trade Nick Leddy because they couldn’t find one taker for Kris Versteeg.

Yes, his season is a revelation and I think at this point, everyone agrees he will be a key contributor to whatever success lies ahead for the Hawks. But there’s not one person, other than Versteeg probably, who thought that was a possibility as recently as three months ago.

–The speculation for trading Jeremy Morin is certainly warranted. He hasn’t played in a game since November 20. Joakim Nordstrom has replaced him. Patrick Sharp’s return is looming. Joel Quenneville doesn’t seem to have any use for him.

However, I really don’t see why Stan Bowman trades him for any reason other than a personal favor to him. His salary is cap friendly. He’s not going to fetch anything more than a late round draft pick or some other team’s disappointment. It’s not like his sitting in a press box is taking time away from anyone else.

At this point and with as much cap uncertainty looming, just hanging on to him may not be the worst idea in the world.

I suppose my other hesitation in launching him for nothing is I would hate to see the Hawks waste all this time and money developing another NHL player only to get less or equal value for him (i.e. a 2nd round pick). I recall Chris Block bringing up a similar point when the Hawks sent Brandon Pirri to Florida for a 2nd round pick last year. It just seems very backwards to build a player’s skills up, spend countless resources on them and then right when they’re at the cusp of being a regular at the NHL level, they ship them off for essentially nothing.

–Statement game is soooo 2008. The fact that the Hawks just ran rampant through Anaheim, Los Angeles and St. Louis in consecutive games isn’t so much a statement as it is a reassurance, that yes, the Blackhawks are still really good.

Statement games are more like “Hey, we used to suck. Now we don’t.” 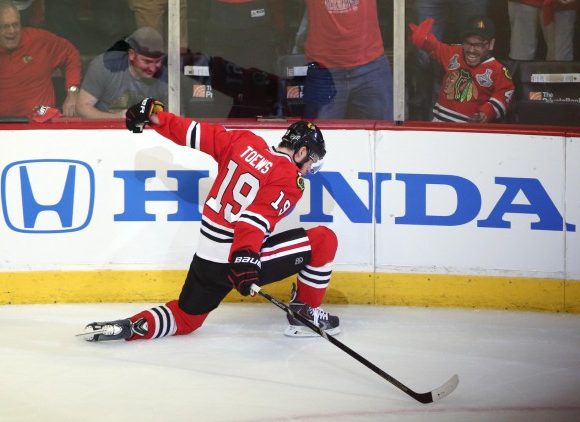 I’m Your Charity Case So Give Me Something To Eat