It’s a weird limbo the Hawks find themselves in in this final week of the regular season. For all intents and purposes the games don’t matter, for both the Hawks and their opposition. Though tonight’s opponent in Phoenix does have the slightest sliver of hope, however futile it might be.

According to Sports Club Stats, the Coyotes have a 2.8% shot of making the post season. They currently sit in 11th in the west with 44 points, 5 back of Columbus, though the Yotes have two games in hand on the Jackets. So needless to say, they’re looking to win out, and they need a whole lot of help to even have an outside chance of getting in.

The issues for Dave Tippet’s bunch have been myriad. From midland special teams to a toy gun offense, to Mike Smith coming back to earth statistically, things just never got off the ground in the desert. Having a nearly non-existent training camp prior to the season put the Coyotes behind the 8-ball before things even started, as their success is so predicated on buying into Tippett’s rigid defensive system, that there was never enough time to fully upload everything the Dogs would need to succeed. About the only unmitigated bright spot for the Coyotes has been Oliver Ekman-Larsson, who earned himself quite a nice contract, and should find himself on many a Norris ballot in the very near future.

Last night down in West East St. Louis, the Coyotes started Chad Johnson (no, not that one), so it looks like Best Supporting Actor nominee Mike Smith will make his first appearance on UC ice since shutting out the Hawks to end the series last spring. The Hawks torched Smith twice in the Desert early in the season, and would certainly not mind doing so a third time. And you have our permission to throw things at people in your section asking when they’re going to make dat Raffi Torres pay for his hit on Horsa.

As for our Men of Four Feathers, the mantra will continue to be “Don’t Get Killed” while fine tuning some aspects of their play. The power play got a boost last night, but it was against Nashville, so does it really even count?

At press time there’s no clear indication as to whose cage it is tonight, but let the record show that there is nothing wrong with giving Carter Hutton a look tonight. Crow once again let in four last night, where maybe a grand total of two of those goals were on him. A Hutton start isn’t reflective of anything except getting the rest where it can be had and getting a look at a prospect. Hutton had a 2.72 GAA and a .908 save percentage for the Swine in 51 games this year for Rockford, which doesn’t exactly set the world on fire.

Rockford won last night but still needs help to get into the Calder Cup playoffs. While on one hand it’d be nice to get some of these kids some playoff experience, from a big picture perspective, the more bodies that can be swapped in during this final week to avoid injury to the names that matter, the better. Furthermore it’d be a lot nicer to see Jeremy Morin’s 30 AHL goals across the ice from Patrick Kane rather than fucking Dan Carcillo or even Marcus Kruger, who is NOT a winger, let alone a top 6 one. But for as infuriating as that is to watch, just take a deep breath and repeat “These games don’t matter, these games don’t matter….”.

The Coyotes will likely come out skating like their lives depend on it, because for all practical playoff purposes they do. Weather that and keep chip-ins away from Mike Smith and the Hawks should be able to keep this outfit at bay at even strength. And a win tonight and a Penguins loss will put the Hawks in a position to clinch home ice through June Monday night in Riot City for those that that matters to. Either way, just get out of the building healthy. Let’s go Hawks. 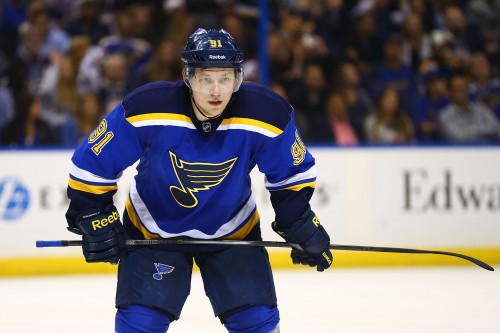 Take Me To The River, Take Me To Where All The Poisons Go – Blues Series Preview: The Forwards