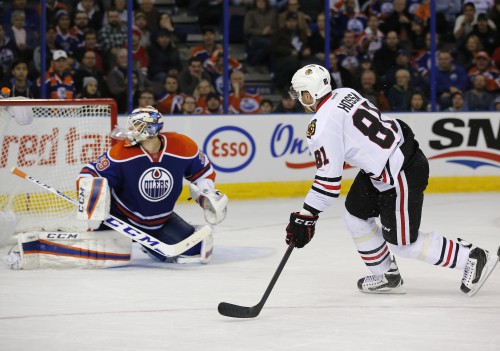 Well you know this story by heart if you’ve followed the Hawks this season. The second line does most of the work to either get the Hawks one or two points, Corey Crawford holds them in when they were seriously under pressure, the penalty kill gets all the kills required, and then the Hawks goof a goal in overtime to get both points (and 3-on-3 every goal is basically a goof, that’s not a knock). The variable this time was getting one miraculous save from Crawford in OT, and the Hawks got an even-strength goal from the third line, which isn’t the first of the year but man does it feel like it.

Still, while gaining the two points when you don’t play well is a positive sign for a team we’re all sure is going to figure out its problems at some point, being severely clocked at times by the Oilers without McJesus is not going to have people printing up t-shirts.

-This is the same pattern we saw with Crawford last year, where the majority of the time he looks as good as he ever has. And when that breaks for a couple games, it’s simply awful. We saw it in the second half of last year, and it’s when Crow is put under severe pressure. He was excellent last night. He’ll be excellent again on the trip, probably multiple times. There’s also probably a belch coming.

-So the couple things we were watching on this trip, and one of them is the top line. Despite the OT goal from Hossa, this didn’t help. Quite simply, Leon Draisaitl and Taylor Hall got whatever they wanted all night, and most of it came against Toews. We’ve tried to find reasons for Toews’s less-than-popping start, and most of them are probably a partial explanation. But there was a moment in OT, leading to Crow’s save, where Draisaitl got the puck in his own corner, looked up, saw Toews in front of him, and simply skated down the ice right by him. Ok, it’s 3-on-3 and there’s never room for that without someone coming to help in normal circumstances, but when would Toews ever need help? That’s not because he doesn’t have a left wing. Something is up there.

-The other thing worth watching, or one of, is how TVR handles the second pairing role, especially on the road. That also did not go well. Most of Draisaitl’s and Hall’s work came against TVR and Seabrook, because Todd McLellan is not an idiot and wasn’t going to throw out his top line against Keith and Hammer consistently like some other morons, like morons who coach in St. Louis. And Seabrook and TVR did not deal with speed very well. This was the main fear. Luckily, there are few teams that possess as much speed as the Oilers, as bad as they are.

-I know I was harping on it, but Taylor Hall’s performance last night is one of the better ones from an opponent I can remember against the Hawks. He looked like he was playing against high schoolers all night, and the Hawks are a genuinely good NHL team.

-That Daley and Rozie thing… well, they’re still looking for Nurse and Pouliot. The narrative is to blame Daley and he’s clearly never going to win Q over, and he did get caught a little flat-footed. But Rozsival basically half heartedly went to cover the front and didn’t get Pouliot’s stick.

-Whatever the problems are in other areas, that’s how much of a plus the second line is. We’re basically out of things to say. They were once again the only plus-forwards in possession.

-Dano seems to be getting hesitant again. A little too much standing still. But then… I don’t think Toews and Hossa are making it easy on him like we would normally expect.

Good news for the Hawks is that the Flames and Canucks cannot boast the pace that the Oilers can play at when they’re locked in (which seems to rarely happen, but does happen against the Hawks). 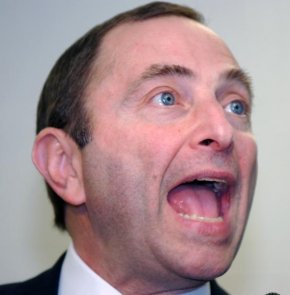