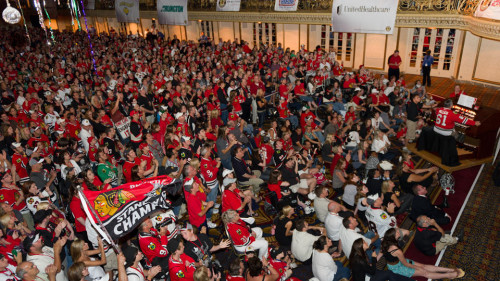 Well, at least the temperature is down this weekend, so the sweaty quotient of those piling into The Hilton should be lower than it has been in previous years. John McDonough’s lovechild of self promotion kicks off tonight and runs through the weekend. I used to do this in the Convention Issue of the Indian, but seeing as how I’m not doing summer issues this year I’ll take you through all the sessions all this weekend and get to the truth to what’s really going on.

Opening Ceremonies: Watch the players roll their eyes as Eddie Olczyk takes forever to introduce every one of them, and with the same intros he’s used for year. If you look closely behind Toews’s eyes, you can see all the ways he’s devising to kill Eddie.

The Second City: Oh great, because Chicago needed yet another fucking improv show with people who aren’t really trained in improv, this time the Hawks players. Remember folks, you too can follow in the footsteps of Tina Fey and Stephen Colbert as long as you’re willing to fork over thousands of dollars to Second City! Talent optional! And if you can’t get that far, at least you’ll be funny to tourists from Iowa!

Hall of Fame Broadcaster Pat Foley: They wouldn’t be starting this at 9am to ensure they get it in before Foley gets gassed up, would they?

Blackhawks Leadership: Rocky, McD, Blunk, Stan, and MacIsaac sit down to not answer questions about why the ice sucks consistently, why they fired Susannah Collins but not Bobby Hull, and all of them can pretend they had anything to do with drafting Keith, Seabrook, Kane, Toews, Crawford, and Hjalmarsson.

Blackhawks Baby Boom: Seabrook, Hossa, Hjlamarsson, and Rozsival discuss having children while playing hockey, when what we really want to know is how Hossa pulls off white dress shoes so consistently.

Coach Q And His Crew: Eddie Olczyk sits down with Quenneville, Dineen, Kitchen, and Waite, while trying to slip his resume into Q’s pocket without anyone seeing. You might not see Q’s lips moving while Kitchen talks if you’re lucky.

What It Takes: Mark Giangreco interviews Toews, Kane, and Brad Richards about winning a Conn Smythe, with Richards asking who Kane and Toews paid off to get theirs. Seems like I ask this every year, but Giangreco still works? And what are his annual spray tanning costs? Like $10k?

The Swedish Invasion: All of the Swedes discuss playing in America, and Oduya is probably traded about five minutes after this panel finishes. Come see what David Rundblad actually looks like. You might not see it during the season after November.

Blackhawks TV All-Access: I really have nothing snarky to say here. As a fellow creative I admire their work considering the constraints.

Hockey Development: The Hawks front office takes the stage to discuss how they bring players through the system, and how many holes in the wall they have in their offices after watching Quenneville not play them.

Old Rivalries Renewed: Dave Kaplan MCs this while we all wonder why it is he’s employed. Seabrook, Saad, Larmer, Troy Murray and Denis Savard are the guests, even though Seabrook and Saad basically were either in diapers or not even born when the North Stars went to Texas  and the Leafs went to the East. At least Larmer can tell us what a fuckstick Bernie Federko was.

Raising a Pro: Saad’s and Shaw’s dad talk about raising an NHL-er. I assume Shaw’s dad will tell us all the adorable stories that involve Andrew having to wear a helmet for most of his childhood.

Life On The Road: Toews, Bickell, and Regin tell us all the non-condom disposal stories about traveling through an NHL schedule. Regin tells us what it’s like to travel all these miles to find out you’re a healthy scratch behind a jenkem enthusiast (I’m sure Cieslak will let me borrow that joke).

Life Outside The Rink: Holy shit Eric Daze?! And they’re going to make him talk?! Will Brent Sopel actually bring his tinfoil hat?

Living Legends: Take the question I asked about Foley’s panel on Saturday and apply it to Bobby Hull for this one. If you’re female try and stay at least 20 feet back at all times.

A Classic Moment: Hossa, Hammer, and Smith try and hide their contempt for having to play outside again. 24/7 questions abound.

#OneGoal: Saad, Shaw, and Crawford talk about social media and using it, and Crawford shows us the best tweets telling him he sucks. All 178,000 of them he gets per night.

Hockey 101: How is Darren Pang, a Blues employee, hosting this? A host of Hawks prospects make an appearance for this, bewildered as to what’s actually going on.