The times, they are a-changing in Edmonton. They’ve got a fancy new building wherein the lights are actually at full power and the benches are on the proper side of the ice, even if that ice is not as fast or as high a quality as that at Northlands/SkyReach/Rexall (sky point). They’re even trying the novel concept of having the puck more than the other team, which so far has yielded positive, if modest results.

Most, if not all of that positivity has hinged on the Canadian Lord and Saviour, young Captain Connor McDavid, who is tied for the league lead in scoring despite not scoring a goal in 10 games. He broke out of that in a big way with a hat trick on Saturday against the Stars and their Finnish shooter-tutor caliber netminding. McDavid has 22 points, and the next closest Oiler is dentist’s dream Jordan Eberle with 13, the only other Oiler north of 10 points. It was not a coincidence that the Oilers went 2-7-1 during McDavid’s goal drought. So for as much young talent as they’ve been able to accumulate by being bad for so long, so much that they thought they could trade away Taylor Hall and somehow improve the team, their fortunes still rest on the shoulders of a 19 year old with less than a season’s worth of games under his belt. That doesn’t mean that there aren’t decent parts here. Leon Draisaitl and Ryan Nugent-Hopkins slot in behind McDavid at center, and while Draisaitl has flown under the radar for a season-plus as a star in the making, even if his current level of production is his ceiling, RNH as a depth center is a nice luxury to have. The aforementioned Eberle is still shifty with a great shot, and Jesse Puljujarvi is has the offensive pedigree of a #3 overall pick himself. The unfortnuately named Tyler Pitlick has surprised with 6 goals so far, and the Oilers counterbalance all of this young speed with the slobbering trio of Zack Kassian, Patrick Maroon, and Milan Lucic, none of whom can truly keep up with their swift centers.

On the blue line, the Oilers don’t have nearly the pipeline that they do up front, but Darnell Nurse is showing signs of truly getting it in his second year under actual coach Todd McLellan. Nurse is huge and angry, and this year, he’s finally a positive possession player, to the tune of 52.94%, best among Oilers regular defensemen. But the vast majority of that has come paired with Eric Gryba, who is a healthy scratch tonight, and Nurse figures to be paired with Matthew Benning, who himself sports a 59.17% share in 9 games. In 50 5v5 minutes together so far, the two have combined for a 57.73 share, but much of that is behind McDavid. Either way, this isn’t the turnstile Oilers defensive corps of the past. At least until Kris Russell hits the ice, who will be dragging down Andrej Sekera based on the morning skate pairings. Oscar Klefbom and Adam “Traded For Taylor Hall” Larsson compose a fine puck moving third pairing in their own right. Make no mistake, aside from Russell, this group can hold their own and push the play.

In net, Cam Talbot has done his best to stave off whatever disease befalls goalies upon their arrival in Alberta with a serviceable .921 at evens, and a .916 overall. Which, while not fantastic, is certainly an improvement over anything that’s been there for the past decade. Talbot looks positively huge in his pads at 6’3″, 205 lbs, and is disciple of the butterfly, so getting him to move laterally when upright will be key to opening up gaps for pucks to go through.

As for the Men of Four Feathers, the weekend wasn’t exactly vintage stuff, but they’ll certainly take the production where they can get it. There are some toss ups among the forward group for tonight’s lineup based on the morning skate among the bottom six now that Tyler Motte is healthy and that Richard Panik has been more or less exposed as “a guy”, now kicked down to the fourth line. The smart money says that Panik stays in at the expense of Jordin Tootoo just based on overall team speed, and that Dr. Rasmussen gets the night off now that Motte is healthy.

On defense, after allowing Michal Rozsival out of his sarcophagus on Saturday, Quennville will more than likely get Gustav Forsling back out there, as his ability in transition will be key against a fast Oilers forward group. Tonight could be a reckoning for the Keith and Campbell pairing, as both of their tendencies towards jumping in the play could leave plenty of real estate behind them for McJesus to claim in a hurry. Corey Crawford gets the net back tonight because that’s just what is supposed to happen.

Much like the Jets last week, the Oilers are surely looking to this game to make a STATEMENT on their own legitimacy, and based on the creepy, fawning way in which the Canadian media has covered McDavid since he was 14, they’ll only be too happy to confirm that should the Oilers grab 2 points tonight. Without last change, the center matchups among each team’s top 3 lines will go a long way at dictating tonight’s outcome. The best guess will be that McLellan will try to get McDavid out against Anisimov, the Hawks slowest and least effective center at the dot, and make the Hawks’ most reliable line to this point defend, while Draisaitl gets another opportunity to put Toews in his back pocket.

Either way, while some of the aesthetics of the viewing experience may have changed, and even if the ice isn’t as fast as it was in the old barn, tonight figures to seem both of these teams in a track meet, and both goalies will be asked to do quite a bit. The team who can limit the other to fewer clean zone will likely be the one dictating the pace. Have balm handy for windburn. Let’s go Hawks. 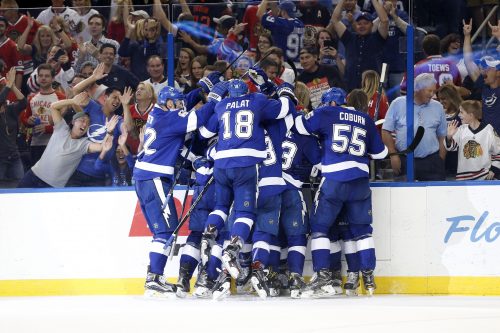