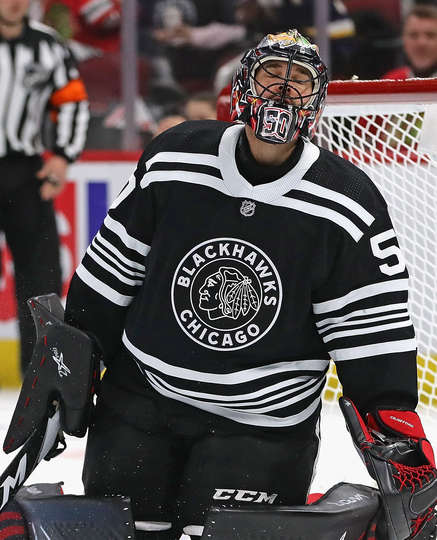 – Jeremy Colliton is not a fucking NHL coach. Bring on Sheldon Brookbank, I do not give a fuck. Jeremy Colliton is a smarmy asshole who made friends with other smarmy assholes and got a seven-figure job out of it, which is about as on brand as you can get for this fucking team now. He managed to coax a rigor mortis erection out of this fucking team for a few consecutive games in November, but tonight has once again hammered home the fact that he doesn’t know how to coach this team whatsoever, poor roster construction be damned. We could go on and on about his decision to put Carpenter between DeBrincat and Kane instead of Dach, but we won’t because you’ve heard that song before. But look at this goddamn clitoral sty:

David Perron leaves the puck in an area that Toews can’t be bothered to cover, giving Ryan O’Reilly all the time and space in world to pick it up. He demurs to Perron, and not one, not two, but yes, three fucking Blackhawks go out to the far boards—which is a very low-danger area, in case, like me, you were wondering—to cover Perron. This leaves O’Reilly whatever is beyond wide open right in front of Crawford. I’m not sure that I’ve ever seen an opponent get so wide open on a designed play since five games ago.

This is what the HIGH-OCTANE DEFENSE this mead-drinking bozo farts out produces. This is by fucking design. It is time to fire Jeremy Colliton. It’s brutally clear his team doesn’t want to play for him, and his designed system produces garbage like this. All we ask for is fun. This isn’t fun. Utterly embarrassing.

– They told us that Olli Maatta was an improvement. Olli Maatta, in fact, fucking sucks. His turnover at the end of the third was a travesty. Under absolutely no pressure, he threw a pass directly onto Tyler Bozak’s stick in the slot. Bozak, in what we can only assume was a reaction to such a bald-faced insult, pounded a shot past Crawford.

– But that wasn’t the only instance of the Hawks clearly giving up. On the very first goal, Seabrook and Nylander got caught floating back on defense, which gave MacKenzie MacEachern an open lane to swat a funky end-board bounce past Crawford. If you want to argue that there’s no way they could have predicted that bounce, fuck you. A bare minimum effort would have clogged up the slot and at least made that shot a little bit of a challenge. Glad to see Seabrook still has something to give and that we got this fucking Nylander loser for the mere price of an effective 20-year-old defenseman who was traded because his stupid fucking dweeb-ass moron coach didn’t like his attitude or whatever. Can’t wait to read the tell-all book where we learn that Jokiharju’s response to everything Colliton said was “Fuck off, nerd, you suck at this.”

– And we haven’t even touched the real shit. Stan Bowman should be fired immediately for not doing his due diligence on Marc Crawford. It’s clear that they brought Marc Crawford in to take over for Colliton if he shat the bed (and not only has Colliton shat the bed but also rolled around in it). But now, three separate players have accused Marc Crawford of physical abuse and regular use of homophobic language throughout his career. If you’re the kind of person that isn’t bothered by this, fuck you. This was a Stan Bowman decision. If his shitty off-seasons over the last two years weren’t enough to show you that he’s a total goddamn moron (Brandon Manning, Olli Maatta, Andrew Shaw, Slater Koekkoek), this should.

– It’s getting more obvious that Jonathan Toews wants nothing to do with any of this. He dragged around all night, such as in that clip we had earlier. But he was also aloof on the Blues’s third goal. After Kane’s pass for Toews got intercepted in the Hawks’s oZ, Toews couldn’t be bothered to get back to defend. This left Connor Murphy to cover Schwartz on the far boards, DeBrincat to cover Walker in the slot, and no one to cover the eventual goal scorer Brayden Schenn, because Olli Maatta was busy being too slow and shitty to adjust.

I can’t blame Toews, but if you’ve lost him, you’re fucked.

– On the plus side, Brandon Saad did what he does best: everything but score. He split a couple defenders in the third for a good chance that he couldn’t finish. He was one of only three Hawks who were noticeably good tonight.

–The others were Dominik Kubalik—who will undoubtedly be scratched on Thursday for REASONS—and Alex DeBrincat, who set up a nice scramble in the first with some nifty skating and a slick backhand shot that led to a Ryan Carpenter chance. He also hit iron off a good Toews pass in traffic. Perhaps if he had someone other than Ryan Carpenter centering him, he’d have more luck.

The Blues never had to leave first gear to grind the Hawks down like a twisting and dry leaf in a dog’s shitty, dragging asshole. The cherry on top is that the Hawks could only ice 17 players tonight because of salary cap restrictions and a sick (of this team) Robin Lehner. Truly a sign of a well-run org, that. If Rocky gave a single shit about anything, Colliton, Bowman, McDonough et al. would be on their asses tonight. But that sellout streak continues, so fuck you. 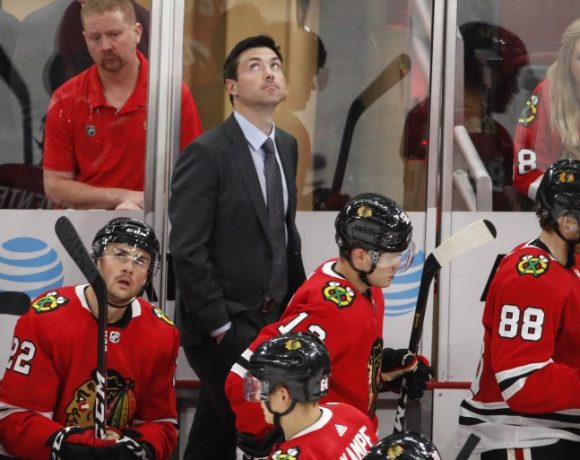 Game #8 – Flyers vs. Hawks: Lineups & How They Were Built