Game #32 – Hawks vs. Jets Douchebag Du Jour: Hey Did You Know Olczyk Was Traded To Winnipeg While His Wife Was Giving Birth? 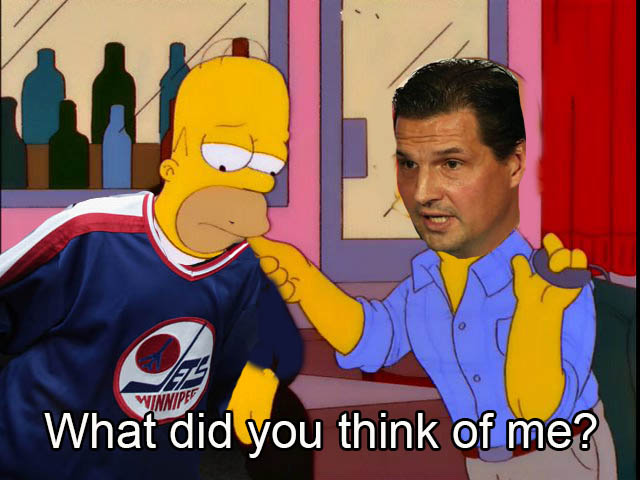 Because if you didn’t, you soon will!

Every Hawks trip to Manitoba is now guaranteed to come with Eddie Olczyk reminiscing about playing with the Jets, or more to the point trying to inflate what he meant to the Jets. If you thought it wasn’t bad enough that Olczyk did his best to co-opt the Hawks “Hockey Fights Cancer” night to be all about himself, he attempted the same a couple weeks ago when Winnipeg had theirs. But that’s fine, he can forward a lot of causes.

No, the problem is every time he arrives in Winnipeg, he makes sure everyone knows that he returns a conquering hero, with roses tossed at his feet. As if he was a legend that all 12 of the Jets fans who were alive and caring in the early 90s have pictures of in their homes, next to their portrait of the Queen.

So let’s clear that up. Olczyk spent two and a half seasons in The Peg. and then returned for another parts of two season after he did next to nothing in New York. He scored 95 goals and registered 201 points, which is fine enough. Then again, most everyone amassed a point per game back then. He ranks behind Laurie Boschman in career goals for the franchise. He’s not in the top-20 in points.

He was a nice player, and one that most wouldn’t have been able to pick out of lineup if wasn’t constantly getting in their face and telling them what a legend he was in their team’s colors.Of the 16K in the building tonight, maybe 1/16th of them would know Olczyk played there if he didn’t spend the entire pregame roaming the concourses and reminding every single one.

But that also won’t stop him from telling you what an ordeal it was to get traded there and deal with the harsh Manitoba winters, which every Jet has done. So it can’t be both.

Really what’s important for Olczyk is Olczyk, as always. You must know that he was a Jet, because if you don’t know that then the Jets are an irrelevant team. He defines them, at least according to him. Maybe they should give Pat Elynuik the same kind of treatment, as he put up the same numbers.