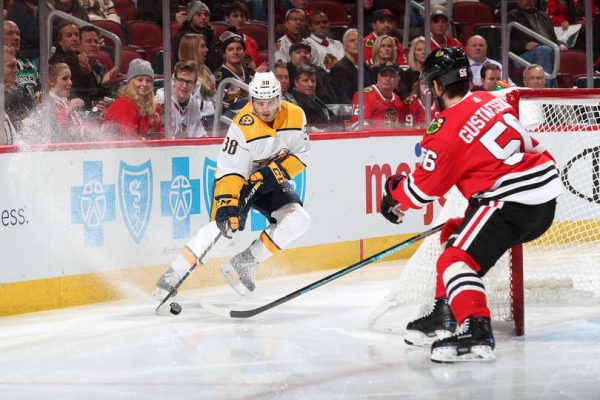 The Hawks played well tonight…I’m struggling to believe I typed those words…they played better than a team that is demonstrably more talented and a legitimate Cup contender or at least conference finalist…and so I will try to make sense of this. To the bullets:

– Right out of the gate, the Hawks had a step on the Predators. Maybe this is a consequence of the Preds being on the second night of a back-to-back. You wouldn’t think that would necessarily be the case, given that Nashville is just plain better but whatever. I don’t know and I don’t care. In particular the top line had a number of quality chances and good puck movement early on, and the second line was right there with them. By the end of the second period the Hawks led in shots 28-18, and they had a 57 and 58 CF% respectively in the first two periods. They were faster to the puck, defensively competent, and they even scored a power play goal. A power play goal, guys! I don’t even know what to say!

– Related to the whole top-line-playing-well-thing is Brandon Saad, who once again had an excellent night. He ended the night with 4 shots and 56.7 CF%. In fact he had three shots on goal barely more than 5 minutes into the game. No, he didn’t score so there was a lack of finish, let’s just get that out of the way, but he played an effective two-way game all night. He was robbed via a desperation play on a short-handed breakaway that happened because he just wanted the puck more, Rinne made an outstanding save on his point-blank chance mid-way through the third, and defensively he was spot on. Saad may not have scored but his play directly impacted the Hawks’ possession and chances. If he can keep this up I won’t even bitch about him not scoring.

– Speaking of defense, that which usually scorches your face and melts your eyeballs like the opening of the Ark of the Covenant did not do that tonight. Connor Murphy and Carl Dahlstrom are just a random pairing that’s making it work somehow. They had a 57 CF% and looked, well, competent, including the final two-minute scrum when Rinne was pulled. I even saw Duncan Keith make a couple good plays to clear the puck out of the zone. Oh, and our defensemen did the scoring. I don’t know if you’ve heard, but there is this thing called the Fels Motherfuck, and it’s real and it’s a force to be reckoned with. Tonight Gustav Forsling was the embodiment, and after sucking out loud he potted one past Rinne who had been unflappable to that point. And then Cowboy Gustafsson had the aforementioned unicorn, a power play goal. Up is down, black is white.

– Cam Ward isn’t better than Pekka Rinne, and that’s evidenced by the shots Rinne stopped tonight, including some excellent chances by Saad in particular but also Kane and a bunch of the other schlubs. Ward also gave up a fairly weak goal in the last minute of the first period after the Hawks had played really well, and I was honestly convinced that would be the end and the Hawks would shit the bed as soon as the second started. But tonight Ward WAS better. He is not objectively a better goalie but at least in this one instance, where it was clear Rinne was going to fuck us over, he was. Of course this means Collin Delia and his superfluous L will not get the chance he deserves (at least not for now), but fuck it, it’s a win.

– The second line of Strome-Anisimov-Kane was not as bad as I expected it to be. Before I go any further, do NOT take this as an endorsement of this being a line! I’m just saying that I expected a dumpster fire and instead for some reason Patrick Kane‘s give-a-shit meter was higher than usual tonight. He and Strome had multiple good sequences with shots and puck movement in the slot, from the circles, near the crease, everywhere you want them to be. Kane bulldozed over Anisimov in the first when his slow ass couldn’t get out of the way, and Anisimov was perennially a step behind his two linemates, but he wasn’t as much of a liability as he could have been. I still think that DeBrincat-Strome-Kane is as clear to see as the bulbous nose on Barry Smith‘s face, but at least tonight this worked.

– I won’t dwell here but Ryan Hartman should have gotten an elbowing penalty for embedding Marcus Kruger‘s mask into his face. No he didn’t jut his elbow into Kruger, but when he saw Kruger coming, Hartman definitely positioned it in such a way that Kruger would have to run into it. It’s kind of like an older sibling asking why you won’t stop punching yourself. Hopefully Kruger is OK soon enough.

The Hawks beat a better team in their division and did so in regulation, by holding onto a one-goal lead. I said it before but I have to reiterate—I can’t believe I just wrote that sentence. Does this mean the season is saved? Absolutely not. But it does mean that maybe they’re not an irredeemable mess EVERY night. We’ll take whatever breaks we can get, wherever we can get them. Onward and upward. 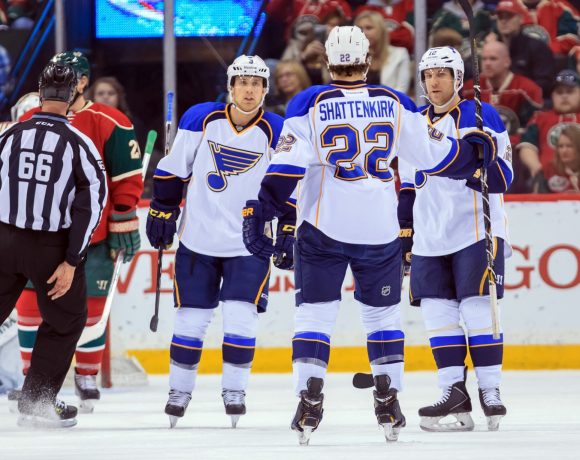 Careful What You Wish For – Round 1 Preview – Blues’ Special Teams