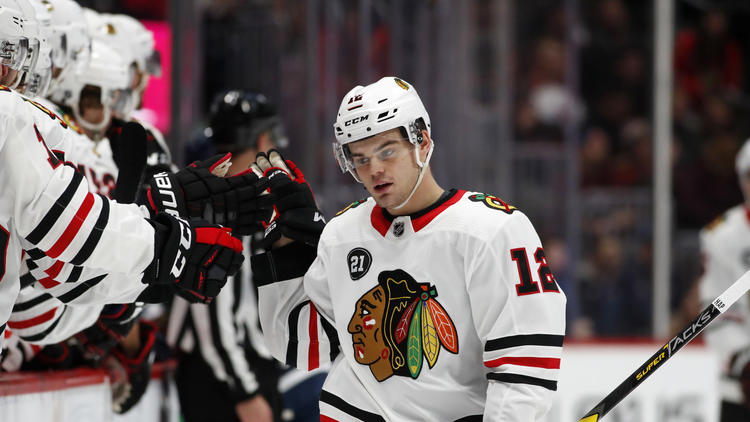 Back when the Hawks played games that mattered, or back when they all mattered, I used to take unique joy in games they simply gutted out. There weren’t that many, after all, the Hawks mostly won on talent and structure back then. But every so often, in a stretch of seven games in 11 days or back-to-backs or both or whatever it was, the Hawks would simply win a game because they decided they were going to. It was as if their will was just stronger than most other teams’. They could be sloppy, they could be tired, they could be hanging on by their nails, but they would almost always find a way.

So it was nice to visit that again, even if it doesn’t signify much.

The Hawks were not good tonight. Or maybe more accurately, they were very far from sharp and most likely exhausted. It was their seventh game in 11 days, and they were playing at altitude against a rested Avalanche team that’s at least got the most devastating line in hockey. No, it wasn’t art. But hey, it got there. And they got a goalie win out of a kid they may want to count on pretty heavily in the not-too-distant future.

Does it mean anything? Well, I don’t think it means nothing. When the Hawks spent 10-15 games or whatever giving up the first goal, or the first three, the fear or thought was that this team wasn’t giving its coach the time of day. That he was merely drawing up things and talking to players who weren’t interested or listening. Well, the Hawks had every reason to toss this one in the rubbish when they showed up, and a lot of teams would have. They didn’t, and though it wasn’t artful or close to it, they gave a shit. That’s at least a start.

-Have to start with Collin Delia. He was the only reason the Hawks got a point, much less two. When Delia sees the play and the puck, he looks far smoother than he did in a cameo last year. He looks in control. The problem, and what he’ll have to work on, is tracking the puck. It felt like he had a hard time at points following the puck through bodies and legs at times, and on another night a team would have picked the open nets he was leaving. That could be nerves. That could be the frantic nature of the game. It’s just one game.

He should absolutely get the start Sunday. As we’ve said earlier, the Hawks have something of a free hit to get a look at a goalie they might just think is their one of the future. There’s no reason to not think that, given what he’s done at the AHL. He’s earned the right to at least get a look at this level. Give him Sunday’s start. If he plays well, give him the 27th. And keep giving them to him until he takes the role or shows that he needs more seasoning. There’s nothing to lose here, and Cam Ward has been around long enough to know the deal.

-The metrics are fucking ugly, but the one that sticks out is the third line. Kampf, Sikura, and Top Cat got high marks. Top Cat is not a third line player, as we’ve gone over at length, but this line is ticking. We wrote off Sikura after a few games last year and not making the team out camp, mostly because we’re assholes. But this looks to be where he’ll be best used. A middle-six winger who isn’t asked much but can take advantage of some sweetheart matchups. He’s been unlucky to not score yet, and I’d wager when he gets one he’ll get a few. There are some hands there.

-The power play didn’t score, but it still looks far more lively with Gustafsson running things. It comes from various angles, it doesn’t have Kane simply Carmelo-ing the puck, and tonight they even tried the high tip from Toews in the middle. What a world.

-The PK gets some stripes tonight, going five-for-five against a team with that kind of weaponry. It did it basically on scrambling on guts, but that’s enough.

-While Gustafsson flashes in the offensive zone to make you think that as a third-pairing bum-slayer on a team that’s worth a fuck he could outscore whatever his defensive problems are, Gustav Forsling simply sucks deep pond scum. He hardly ever flashes anything offensively, and that means you can’t justify how woeful he is in his own zone. For the Avs lone goal, he checked the wrong guy into the boards, and then stood behind the net and simply watched Kerfoot pass to the slot for Compher where he should have been standing.

Sure, give him the rest of the year to prove he can be anything, but I’ll tell you what I’m betting you’ll find out.

Atop The Sugar Pile – All Star Break Edition