Game #42 – Hawks vs. Senators: Spotlight – Erik Karlsson, The Treasure We Need To Save 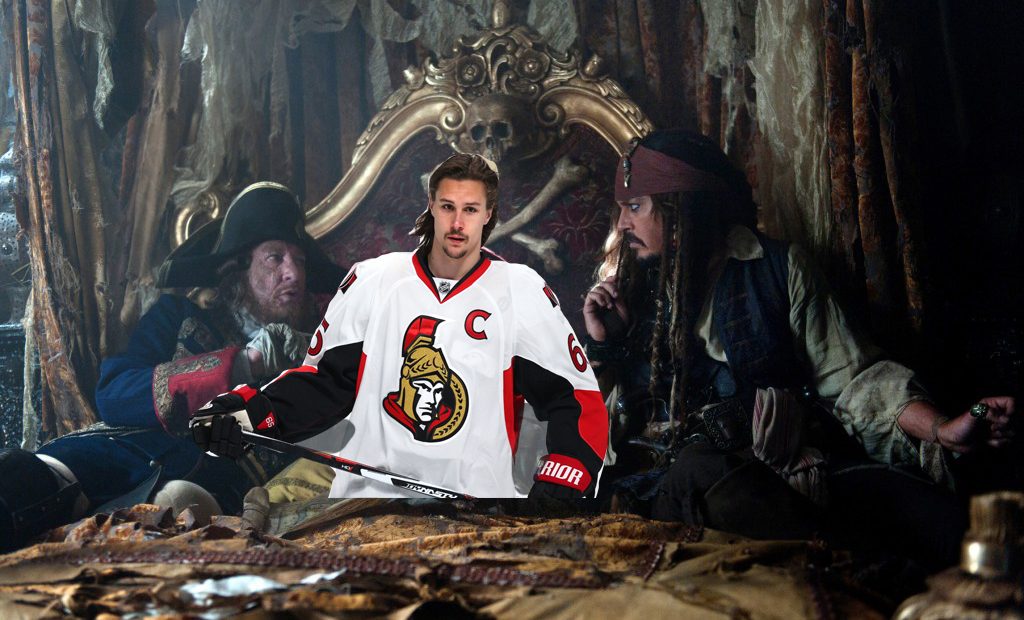 At this point, it feels like either the hockey world has taken Erik Karlsson for granted, or the discussion is just about whether or not he should be traded. Before doing anything, it’s important to once again go over just the insanity that is Erik Sven Gunnar Karlsson. Yes, there are tons of Zevon references to be made there. Erik The Sven Gunnar Karlsson, he killed to earn his living.

Since coming into the league in the ’10-’11 season, Karlsson has four 70+ point seasons (and another 66-point one for good measure0> That’s over nine seasons now. In that time, only two other d-men have had that many points in season. Brent Burns did it twice, and Victor Hedman last year. Karlsson has FOUR. Keep that in mind. He probably would have had a fifth at that pace if he didn’t miss most of the lockout season with a shredded achilles, and even then his Logan-healing abilities brought him back far sooner than it should have.

Let’s take two years ago. Karlsson had 82 points, the first time a d-man cracked 80 points since 2006 and only the second time since 1996. He carried a +7 in Corsi-relative and a +3 in Expected Goals-relative. He led his team in scoring by 21 points. And yet they still gave the Norris to Drew Doughty because he’d been to a Tim Horton’s in his teens, where he assuredly marked the bathroom with really shitty graffiti that was almost assuredly unintentionally misspelled.

Save his rookie year and last year where his ankle turned into an origami demonstration, Karlsson has always kicked his team’s rates in the head and carried this team. And that’s the unfortunate part, is that Karlsson has barely ever had a teammate worthy of him, or coach. Karlsson somehow willed this team to a conference final last year, along with Craig Anderson, but that’s just about as good as a look as he will get in Ottawa. And this is where the heated debate begins.

All hockey fans, with no disrespect to Ottawa fans, need Karlsson out of Ottawa. Having this Ferrari being handled by Guy Boucher with only a few prime years left is akin to getting your Wagyu ribeye well-done. If Karlsson were a Predator he could seriously take a run at 100 points. Swap him with Hedman and he would almost certainly get there. This is simply a waste of a beautiful gift, to have this playing in a trap and trying to set up Derick Fucking Brassard. This is a team trying to find reverse on a Russian tank.

But if you’re the Senators, and you know you’re going nowhere fast, what can you do? Karlsson has one more season after this one on his contract, and then he goes UFA. He’s going to get $12 million a year from someone, as well he should. Maybe the Senators have already told him they’ll give him that, and Karlsson does love Ottawa so much he has already made it clear he’ll take it. Then again, given that the soft-spoken Karlsson felt the need to publicly make it clear he’s not taking any hometown discount, you’d have to believe these things haven’t been discussed at all.

And even if the Senators want to offer that, and that’s unlikely, does Karlsson want to take it? He’s been past the second round only once, and the future is not exactly bright in Ottawa with their shithead owner crying poor, demanding a new arena when he’s not shaming his own fanbase, and has already starting making goo-goo eyes at Quebec, assuming he can given all the facelifts. The Senators are bottoming out this year and there doesn’t appear to be much help on the way unless GM Pierre Dorion can pull some real miracles in shipping off Mark Stone/Bobby Ryan/whatever else.

If you really want to reset a team, you cash in a piece like Karlsson. His trade value will never be higher than it is right now. A team that acquires him gets two playoff runs with him, and if they’re in the middle or closer to the end of the window that might be worth the ransom you’d have to give up. We’ve talked about the Hawks offering their entire prospect line, but Dylan Sikura plus ballast probably isn’t near enough.

Who else? The Oilers probably could figure out something, but with their payroll next year can they even afford one year of Karlsson after this? The Leafs are an obvious fit, but the world would end if the Sens were to trade Karlsson there. The Islanders in a bid to woo John Tavares? Do they have enough?

The bigger complication is figuring out what Karlsson would be worth. In a world where Matt Duchene netted the Avs three prospects and a raft of picks, what’s Karlsson? This arguably the best player on the planet, where Duchene is a decent #1 center and a better left winger. Three NHL-ready or already young NHL players would probably have to be a starting point. Along with three or four draft picks. It would have to be Herschel Walker-esque. What GM has the balls?

In our dreams, or nightmares, had Stan Bowman been able to manage assets like Teuvo, Johns, and Danault properly, they would have the pieces. But now you’d almost certainly have to include one of if not both Schmaltz and DeBrincat, and then what kind of team would Karlsson be joining anyway?

In truth, the Senators might be fucked. They either trade the best in their history (and it’s not even close) for 75 cents on the dollar at best, or they ride out the last year and a half and watch him walk for nothing because he wants to win something and play in a system that rewards what he does. 75 cents on the dollar probably doesn’t rebuild an organization, and it certainly doesn’t get more people to drive out in the Sea of Green where Canadian Tire Center is to watch dreck-on-ice.

So looks like for another year and a half, our beautiful treasure will remain buried in the muck.