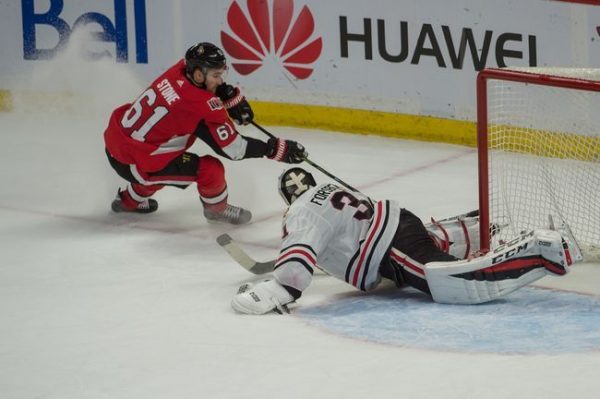 It’s a good thing this game started at 7, because honestly, staying awake through this crapfest was hard enough—had it gone any longer I, and probably most of the people who showed up at the UC, wouldn’t have made it. You would think that a game with back-and-forth scoring that went to a ridiculously drawn-out shootout would be an exciting affair, but you would be wrong. Except for brief flashes of effort, neither team really looked like they half a shit. The level of play was equally lackadaisical and as exciting as one would expect because of that. To the bullets:

–The shootout went on for what felt like 14 rounds, and fortunately Schmaltz’s goal was enough to eke out the win. Anton Forsberg actually had a good game, despite giving up goals right after the Hawks had scored (neither of which were entirely his fault, as usual). He made clutch saves on Marion Gaborik, who inexplicably came to life in the third, and he made just enough stops in the shootout. He finished with a .941 SV% and even got to be the second star of the game, which warmed my cold, blackened heart.

–Out of the sleepwalking there were other guys who had a decent night. Carl Dahlstrom played mostly intelligently at the blue line, and he ended the night with a 52.6 CF% while taking 55% of his starts in his own zone. Top Cat of course scored a shootout goal that should have ended the game, and well before that he made excellent passes that would have been assists had they been to anyone more competent than Brent Seabrook and Ryan Hartman.

–Patrick Kane was involved in both goals: on the first, Our Cousin Vinny made a pass that was spot on, and Kane picked up his own rebound; on the second he assisted on Wide Dick’s goal where Arty managed to sneak behind Karlsson. But, both times the Hawks scored they gave it right back all too quickly, and Kane also stood by and literally watched as Duchene sped past him and scored the tying goal, so there was that. His shootout goal was appreciated, but don’t go thinking Kane’s give-a-shit meter was anywhere above the “Ah, fuck it” level.

–The power play remained dismal, with their only two chances being entirely useless.

–Overall, it was a back-and-forth of two bad teams, where one just sucked a little bit less than the other. However, we have to cherish each win because who knows when another one may come along. The Hawks have gotten beat by shitty teams enough times this season; if we can be on the other end of it for once, we should appreciate it. And hey, maybe some teams were impressed with Anisimov’s goal and will put more thought towards taking that contract off our hands. A girl can dream… 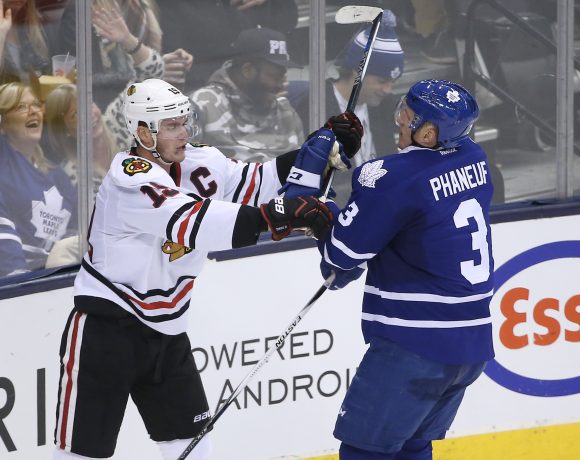