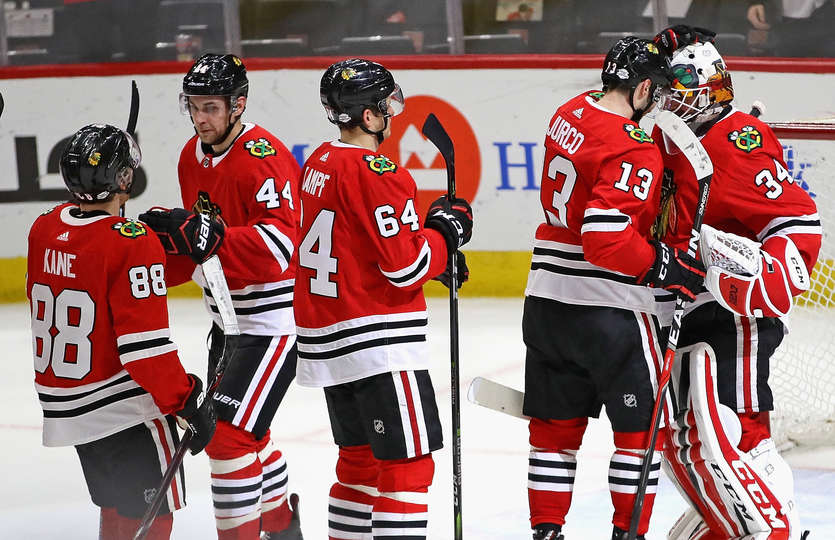 The game flow may have had all the appeal of a freshly shot snot rocket hanging menacingly from a necessary hand rail, but there were quite a few things to get excited about in this Friday night affair. To the bullets:

– If not for the Fels Motherfuck, which apparently is airborne now, J-F Berube would have had a 43-save shutout. But 42 out of 43 ain’t bad either, especially given the circumstances. This was his first start as a Blackhawk in front of a team that doesn’t have much to play for. He went up against a team that got wedgied so hard against Nashville that all the testosterone in their bodies should have been stuffed into their brains, and yet the Sharks, who still have quite a bit to play for, couldn’t solve him. And it wasn’t terribly flukey either. Berube rarely looked lost out there and even made a few outstanding saves in the third, none more obvious than his highway robbery of Jannik “Don’t Call Me Isaac” Hansen after a brilliant saucer pass from Tomas Hertl. It’s a little early to start the “WHY DON’T DEY TRADE CRAWFERD N LET DAT BER-YUBE GUY START” bus, but he sure looked good tonight.

– Anthony Duclair sure played like he wanted an extension tonight, and if the Hawks’s brass is smart, they should be giving it to him. He was all over the place tonight, assisting on both Rutta’s and Schmaltz’s goals. The Rutta assist was a thing of beauty, as he danced from behind the goal line to feed Rutta, who had to regroup his own backfire to plant the goal. And his steal on a flubbed reception from Mikkel “Not Clarence” Boedker was topped only by his gorgeous backhanded pass through the Royal Road to birthday boy Nick Schmaltz. He topped it all off with an even 50 CF% and a 1.55 CF% Rel. All in all, a solid night for the young man.

– In fact, most of the Hawks contributors were on the young side. Vinnie was all over the ice, even though he didn’t show up on the score sheet. Saad was similar, with a 63+ CF% and an utterly gorgeous power move toward the net right before Schmaltz’s goal. Erik Gustafsson looked decent out there as well, and though the possession numbers are damning, DeBrincat looked poised to score all night. While this season may be shot, there is hope for the future.

– Jan Rutta had himself a decent game off the IR. He’ll never be more than a bottom pairing guy, but when he’s on and not entirely out of gas, he’s a serviceable defenseman. He was persistent on his goal, and he now leads all Hawks D-men with six goals, which is less surprising than it seems, given he was scouted as an offensive defenseman.

– Our Special Irish Boy Connor Murphy was the odd man out among the youngins. Tonight was by far one of his worst performances since October. Between his poor outlet pass in the first, his sloppy interference penalty in the third, and his team-second-worst 40+ CF% (behind only Arty the One Man Party’s 32+), it was simply not one to write home about. Though it is tempting to pin it on Seabrook—whom the Sharks targeted any time he was on the ice—it’s not acceptable to transfer blame if we expect Murphy to be what we want him to be, especially when Seabs isn’t doing anything egregious, as was the case tonight. It’s just one game, but it sure was disappointing.

– I’m ready for one of the moron GMs to throw a 3rd round pick at the Hawks for Tommy Wingels. I get why he’s skating on the top line with Saad and Toews, and I get why he’s on the power play, but it doesn’t mean I have to like it. He puked all over his skates on two prime passes to Saad in the first, schlepping it into Saad’s skates on the first and air mailing him on the second. With Saad’s luck this year, neither were likely to go in, but give the man a chance.

–Watching Duncan Keith lose half a step is still weird. His CF% was a 48+ on the night, and one of his most noticeable plays was a botched drop pass at his own blue line in the first that led to a turnover. Yes, he’s getting older, yes, he has to learn to adjust, and yes, he’s playing with Jordan Oesterle, but it’s strange to admit that he’s gone from a for-sure #1 to somewhere closer to a #2/#3 this year.

– The power play is still a fart you shouldn’t have given the benefit of the doubt. It’s a fucking totem for the year.

It sure wasn’t pretty, but it’s two points. I’m far too stubborn and proud to talk about tanking, so two points against a playoff contender is a good night cap.

Beer du Jour: I went sober for the first, and made up for it with Steel Reserve and Miller High Light tall boys, followed by a glass of the Sacrament on this Lenten Friday.

Line of the Night: “The Blackhawks will put together a win streak for the first time in February.” – Foley 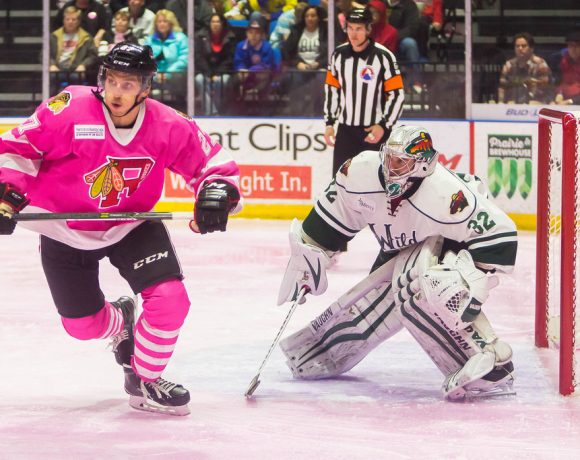