After a disastrous weekend that, if it didn’t turn the Hawks’ playoff chase to cinders, certainly threw it on the fire. So you’ll be forgiven if your eyes turn to next year and beyond, which is really what this season has been about all along. Except the Hawks didn’t have anyone to develop for next year, unless you count Henri Jokiharju, who isn’t here. Nor do Drake Caggiula or Dominik Kahun count. So basically it’s Dylan Strome and that’s it.

But in looking toward next season, you can dream about how the blue line will change. How it has to change, even if the Hawks’ front office doesn’t see it, or believes they have enough time to wait for their four kids who’ll never fit on the roster together anyway. If your scout’s hat is on, we get it.

There is only one name on the free agent pool that will change anything, and that’s Erik Karlsson. And he will be as expensive as possible, and may not be interested in coming to a team that is definitely in flux, at best. Maybe all it takes is money, but the Hawks seem unlikely to flash that kind of wad even if EK65 was batting his ever so lovely lashes at them. And the rest of the free agent pool blows when it comes to d-men.

So that means trade. Or trades. Jacob Trouba will be available for a price, but he’s spent the season proving he might not quite be worth the ransom the Jets would ask, and that’s before the intra-divisional tax. Cody Ceci is another who’ll be RFA, but he’s…well, he’s got a terminal case of being Cody Ceci. The Hawks have inquired before, but they have to aim higher.

Hampus! Hampus!’s numbers won’t leap off the page at you. 34 points is his career-high. 13 goals is another. But you have to look deeper than that.

Lindholm’s defensive responsibilities have grown and grown as he’s gone along, with a dwindling number of shifts starting in the defensive zone. That hasn’t stopped him topping the team-rate in Corsi, scoring chances, and until this season, high-danger chances. And keep in mind the last three seasons he’s been playing for the dumbest coach in the world. It’s hard to judge anyone under that. When he had a coach that played at least an up-tempo style in Bruce Boudreau, he simply kicked around what was in front of him, including carrying a 57% share in ’14-’15. He is one of the more underrated d-men in the league.

And he’s done it with a couple partners, so he’s not a product of getting to play with someone special and just coattail-riding. He’s mostly been with Josh Manson, but also Brandon Montour and some Cam Fowler, and he’s always lifted them up. He is what the Hawks are looking for, especially as they need someone who can lift a player or two up.

So, why would the Ducks trade a 25-year-old d-man who does all these things? Especially one signed for three more seasons at an incredibly reasonable $5.2M hit? Because A) they’re the Ducks and they’re stupid and B) because they’re going to have to jump-start a rebuild with something. Their forwards are just going to be salary-clearing, which won’t net much in return. They just re-signed Jakob Silfverberg for some unknown reason, which might have gotten them something tangible in return.

They have to cash in on a chip somewhere. Offer them Boqvist, because the idealized version of Boqvist is probably Lindholm anyway. Offer them Boqvist and Beaudin, fuck. There’s not enough room for everyone, and you can make do with Jokiharju and Mitchell. Or offer them Jokiharju, who’s development you might have already fucked but other teams don’t know that yet. You need a splash, and Hampus! Hampus! is it.

The Hawks are going to have to get creative. Here’s a start. 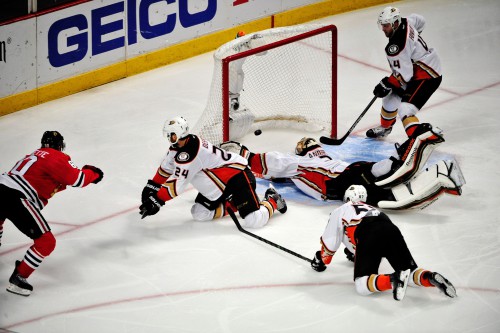