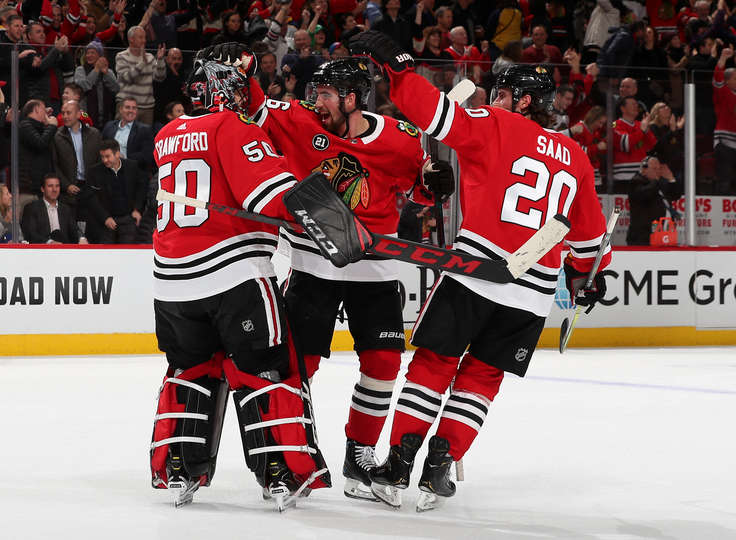 THE BEST PART WAS WHEN THE BUILDINGS FELL DOWN. Until late in the third, this one had all the appeal of an open-air autopsy in Miami-Dade in July. But with both of these teams out of the running, there was always a chance this would turn into a shootout, and it did, literally and figuratively. In a game whose highlight was the Sharp–Burish Eagleman parody, it’s nice for the outcome not to be in vain. Unless you’re rooting for a tank, in which case, I can’t help you. To the bullets!

– Brendan Perlini had himself a game tonight. Playing alongside DeBrincat and Strome will do that sometimes, but he really took advantage. In just under 11 minutes, he scratched a 58+ CF% and scored the game-tying goal. His 18.67 CF% Rel led all Hawks forwards on the night, and frankly, it wouldn’t have been upsetting to see him get a little bit more time tonight. He’s probably not much more than a 2019 version Kris Versteeg (1.0 or 2.0 is still TBD), but that can be fun sometimes. I liked that Colliton slotted him there tonight.

– Because we can’t have nice things, a nice performance from Perlini on the second line was balanced by John Hayden appearing on the first line because Colliton’s genious brain is a muscle that needs to be flexed, apparently. He might be a nice guy, and he’s got a degree from Yale—which will no doubt be helpful for when he commits securities fraud after he retires, or whatever it is rich prep boys do in their free time—but he’s not a hockey player for this generation. In just over six minutes, he had a 4 CF against an 11 CA, good for a team-worst 26.67 CF%. The next worst was Patrick Kane, but he also does things like score goals and create assists. Unless you can find someone who either actually commits to GRITHEARTFAAAAAAART or reads Ayn Rand unironically, it’s time to cut bait. He’s just not very good.

– If the Hawks had managed not to play jump rope with their own dicks and win this in regulation, this would have been the ARTEM ANISIMOV GAME. His first goal came on a breakaway (lol) off two excellent tic-tac-toe passes from Kane and Kahun, and the second was sheer power from our widest dicked forward. If he wants to keep Refrigerator Perrying his way into goals, that’d be fine.

– Murphy and Dahlstrom were nails tonight. They dominated the Eichel line to the tune of a 64+and 66+ CF%, respectively. Murphy almost contributed on the score sheet too, with a nice kick to the stick wrister off a Kunitz pass. Connor Murphy probably tops out as a 2A guy on a good team, but when given 1A matchups tonight, be performed admirably.

– Crow was a little urpy tonight. You’d think that he had that first goal caught in his glove, but his fumble, compounded with Seabrook’s Cubist positioning and the delayed penalty, gave Vladimir Fucking Sobotka free rein near the crease. He also totally lost his net on the shorthanded goal unnecessarily. Still, he managed to keep the Hawks within shouting distance, even if that meant taking a hard Sheary wrister right off the mush late in the first. Poor guy can’t catch a break. These games don’t matter much, but seeing how Crow finishes out the year is something to watch. He’s obviously shaking off some rust, but if he can finish strong, it’ll be something to hang onto going into the offseason.

– When Erik Gustafsson is scoring, you can put up with his treasonous dereliction of duty in the defensive zone. When he’s not, it’s worse than watching your mother fuck your bully. He was putrid tonight at all times, falling asleep in coverage on Okposo’s goal being the most obvious. In a perfect world, you pair him with something that looks like a better version of Dahlstrom and let him bum slay, especially if he’s just not going to learn how to play defense. But if he’s not scoring, he’s not worth even the modest salary he’s making now. Something to watch going forward, now that the Hawks don’t have much to play for.

– With each passing day, buying out Seabrook’s contract looks like the only solution to that problem, which is a fucking shame in the grand scheme. He was mostly responsible for Montour’s goal, as he wandered out to the near boards to cover Smith despite Montour and Pominville streaking through the middle of the zone. If he sags back, which is really all he can do anymore anyway, it’s at worst a 2-on-2, with Seabrook covering Montour and Keith covering Pominville, leaving Smith at the point and preventing Montour from taking all that space.

– The power play looked like complete shit. The last thing Coach Cool Youth Pastor needs is for the one thing that he can point to as making better taking a huge dump on him toward the end of the year. It’s only one game, but they looked terribly out of sorts.

– Top Cat had a couple of excellent chances that he just missed on. The most disappointing miss came off Kane’s rebound on the PP, which looked like a guarantee coming off his stick. Instead, the puck rung around the boards to Rodrigues, who blew away a half-assing Kane and led to Bogosian’s highlight reel goal. Shit happens.

– Duncan Keith had a pretty good game. His goal was good, aggressive awareness. His possession numbers were a refurbished marital aid, which is concerning because he didn’t match up with the Eichel line too much. But he wasn’t a complete tire fire. Baby steps.

– Garbage Dick hopped over Larmer for fourth in Hawks history with 924 points on his assist on Keith’s goal. Creep can roll.

If you’re a Brendan Perlini or Artem Anisimov fan, you had a really fun time tonight. And for as stupid as 3-on-3 OT and the shootout are, they’re mindless fun. Which is exactly the kind of fun we need with this team.

Line of the Night: Each team has had the lead in the game! Who’s gonna win it? –Foley 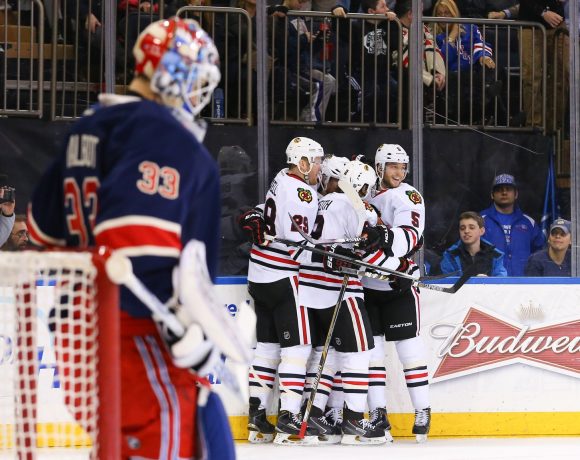