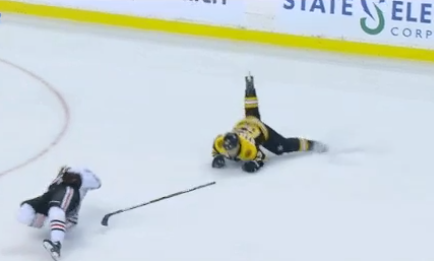 Each effort more useless than the last. To the bullets.

– Brad Marchand, acting on every instinct to be the biggest, wettest garbage bag of human shit possible, likely ended Anthony Duclair’s season today, and perhaps his career with the Blackhawks. Pat and Eddie went out of their way to say that it looked like an accident, but I don’t know how they came to that conclusion. Here it is in slow motion:

The full-speed shot makes it look even more intentional, with Marchand leaving his feet and slinging his arm at Duclair’s head. With Marchand’s pedigree as a pus-filled ass polyp, you have to assume that it was at least partially nefarious, as it looks like Duclair is in his sight the entire time. But with Marchand playing as well as he has and the Bruins on a playoff run, don’t be surprised to see him get maybe a game suspension.

As for Duclair, what a horrible way to end his year. He’d had a rough go of it lately, and now this. Season in a nutshell.

– Duncan Keith had one of the worst games I can remember since he came up all those years ago. His bad passing, poor positioning, and inability to strap in his jock led to the Bruins’s first three goals, respectively. He and Seabrook were on the ice for three of Boston’s four PP goals as well.

He’s obviously lost a full step, and without him, the Hawks have only Murphy who has any potential to play defense as a defenseman. We knew going in that the Hawks would need to rely on Keith, so if this is what he’s going to be, the next few years are going to be drudgery.

– Erik Gustafsson had a hot and cold game. The offense was on display early, as he set up Toews on a tip, buried a goal from the blue line, and set up Highmore with a gorgeous shimmy on the far boards followed by a slick pass through the Royal Road. But he also let Pastrnak behind him for Boston’s game-tying goal (and wasn’t helped by Brent Seabrook, who let human plantar wart Brad Marchand soft-shoe his way around him effortlessly) and looked generally lost in the defensive end.

Gustafsson is a fine player to have when you have four or five other guys who are obviously better than him on your team, and when you’re paying him $1.2 million over two years, not per year. But if this is one of the guys that the brain trust is going to lean on next year, this team is fucked.

– John Hayden looked good coming up to replace Vinnie. Other than his unnecessary fight in the first, he showed strength with the puck and seemed to fit decently with Schmaltz and DeBrincat. The Hawks are going to have to decide whether he’s going to be a scoring power forward—which was sort of the point of sending him down in the first place—or a big body who drags his dick around looking for fights. If it’s the latter, this team, again, is fucked.

– Credit to Kampf for setting up the Hayden goal. He had a nice strip and an even better pass off the far boards to spring Hayden.

– Congrats to Highmore on his first NHL goal. Like Hayden, I’m still not sure what he’s supposed to be, but he didn’t look particularly bad today.

– As is becoming more common, Berube got hung out to dry on most of his goals. The stat line is going to look horrible after being out there for six, but I’m not sure what he’s supposed to do with the defense that’s in front of him.

We’ve got 12 more. And if the Hawks decide that the defensive corps that they dressed tonight is what they’re going with next year, the next 94 games are going to be one gigantic Giordano’s fart.

Line of the Night: “They’re getting going north fast, and it’s coming down your throat.” –Adam Burish during the pre-game, describing the Bruins’s transition game.