Despite the fact that the Hawks have pissed their pants a little bit over the last week and a half blowing games to non-playoff teams in Dallas and Philadelphia, there is still an outside shot at home ice in the first round given their games in hand. But with Nashville once again beating top teams and the Blues getting Kevin Shattenkirk back, the schedule makes the ascent steeper starting tonight with the Blue Jackets, who while well out of the playoff picture have won four straight and eight of 10.

Beset by injuries early in the year, there was really no way that the Jackets were going to climb out of the hole they dug themselves. But they’ve adhered to Todd Richards’s revamped system with whatever interchangable fast, physical forwards they’ve had on hand. Their possession game has suffered after a surge last year as a result, controlling only 46.8% of even strength attempts, or just barely more than the Leafs and Flames do. And they do have a Vezina trophy winner backstopping the proceedings in Sergei Bobrovsky. Bob has had an up and down year himself and has also been bitten by the injury bug, but when he’s been on, obviously the Jackets have surged. Thus far in March, Bobrovsky has a .925 save percentage, and it’s not a coincidence that the Jackets are 7-2 to far. Granted, he’s faced an average of 34.5 shots against in those decisions, so he’s not hurting for work. In their 12 games in March the Jackets have only been above water in the possession battle four times, and they were against Colorado, Edmonton, Carolina, and Washington. Not exactly tall timber.

The Jackets are middle of the pack in scoring, thanks mostly to a top heavy forward corps led by Ryan Johansen yet again, with his second straight 60 point season, showing his worth after his protracted hold out in the offseason. Nick Foglino has conveniently parlayed his spot next to Johansen in a contract year to a team-leading 64 points, an All-Star Game captain’s spot, and a 30 million dollar contract. On the opposite side is the aging but still tremendously effective Scott Hartnell, who despite having no feet now has his 8th 20+ goal season in his career, and 4th 25+ goal season. The three take on the toughest competition nightly and for the most part break even, with Foglino and Hartnell on ice for about 53% of shot attempts, and Johansen at 47% as a function of being the only Jacket center who can win a draw and therefore getting sent out in a more defensive zone situations. Past that, however, there isn’t much going on. The Jackets have some nice players in the diminutive Matt Calvert and Cam Atkinson, and have gotten more than anyone could have expected out of the miniscule Mark Dano, who has 15 points in 27 games and 9 points this month. But the depth has been eroded by Brandon Dubinsky being predictably hurt, leading to Jarmo actually trading for Rene Bourque and David Clarkson, who are both now hurt themselves.

The Jackets’ defense is still a mess even despite jettisoning James Wisniewski and his stupid contract (who was hilariously a healthy scratch for Anaheim last night). They’re still far too reliant of Jack Johnson, which is a problem the Kings solved when they traded him to Columbus. David Savard is now taking the tough shifts with Johnson, and they’re both getting buried. The Jackets like Savard’s all around game, and his 11 goals (8 even strength) can’t be sneezed at. But Ryan Murray is hurt once again, so the Jackets aren’t getting legitimate drive out of any of their pairings, because Fedor Tyutin sure as shit isn’t providing it.

As for our Men of Four Feathers, they’re certainly not ones for ever making things easy on themselves. The past week’s worth of games has been structureless torture to watch, and against mostly garbage competition. To put things in perspective, after shutting out the Hawks, Kari Lehtonen gave up three goals to the Sabres. That’s how difficult the Hawks are making this.

In the wake of dressing a completely idiotic lineup against the Flyers, Joel Quenneville has had his hand forced a little bit by injuries to Joakim Nordstrom and Gorilla Salad. Nordstrom has been noticeable on the fourth line since his most recent call up, but realistically the unit shouldn’t lose much with Andrew Desjardins now with Shaw and Kruger. Kris Versteeg continues to manage to fail upward, going from healthy scratch to the most choice spot in the lineup with Toews and Hossa in the span of a week. The two middle lines might actually be onto something however, as Brad Richards finally gets released from the hoosegow to center Saad and Sharp, and Teuvo gets back into the lineup on Vermette’s right where they had some chemistry before Q blew the whole thing up.

On defense, the Stone of Triumph that is Michal Rozsival has been removed from Duncan Keith at least for the night and been replaced with David Rundblad, whose play had been steadily improving prior to Timonen’s arrival leading to his benching. Rundblad had one of his better games in a Hawk uniform against the incredibly fast Rangers while paired with Keith, and the two have a 58.1% together in just under 200 minutes of even strength time. Ideally, Rundblad would be paired with the ramping-up Timonen in sheltered minutes on the third pairing while the traditional top four do their thing, but if this ends up being the configuration tonight it’s certainly better than the smelly old Czech alternative. Corey Crawford gets the cage once again in hopes of not having to bail his team’s dumb asses out.

On paper this looks like a favorable matchup for the Hawks, considering the attempts that the Jackets give up and their lack of forward depth. But their recent play hasn’t lent any confidence to that notion, and the Hawks have a habit of making average goaltenders look spectacular this season. Bobrovski is tall, gangly, and athletic and the goals won’t come easy but there should be enough chances against him. Toews will draw the Johansen assignment undoubtedly given Teuvo’s spot with Vermette, the only other viable alternative to do so. But with last change the Hawks second and third lines should be able to find favorable matchups. SHOULD BE. This is a game the Hawks have to have not only because of who the opponent it, but also because of what the schedule holds in store. If there is going to be any chance of either catching Nashville or St. Louis, or keeping Minnesota at bay, 2 points however they come are necessary. Let’s go Hawks.

If you’re heading to the game tonight make sure to pick up a copy of our gameday program sold outside the UC. We’re at Damen and Monroe, Wood and Monroe, and outside Gates 2 and 3 on Madison. If you’re not going, you can pick up the digital version right here.

Someone Gonna Step To You, Snoop Dog?: Hawks at Ducks Preview/Pregame Thread/Running Out Of Salt 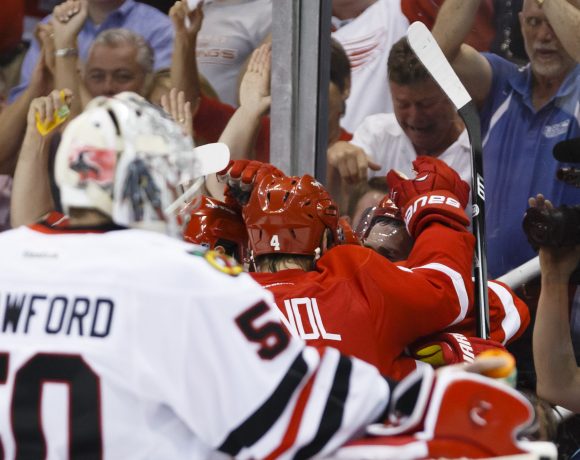