Get On Down To I-76: Hawks at Flyers Preview/Pregame Thread/All You Can Eat Buffet

GET ALONG, 76ers: Broad Street Hockey (but good God don’t ask about our cheesesteaks)

After getting some things back aligned against the Grand Rapids Griffins on Sunday, the Hawks look to keep it going with a return to the scene of the crime (the first one, not the second. God I love writing that).

News out of the morning skate sees Antti Raanta taking the start. While I fear for how he will deal with Wayne Simmonds, Scott Hartnell, and others in his smallish grill all night, let’s all be relieved that Q wasn’t tempted to try and wheel Crawford out for both halves of this back-to-back (especially as tomorrow night basically constitutes the Hawks Central Division Last Stand). Michal Rozsival and Brandon Saad will both miss out with injuries to various parts. While some will cower in fear at the thought of Brookbank drawing in, by every measure he’s been just about Rozie’s equal this year and whatever problems he’s had could be attributed partially to lack of sharpness.

As for replacing Saad, Peter Regin will come in for seven glorious minutes and look just good enough for you to wonder why he isn’t getting more. Though it’ll be at wing even though he’s a center and Shaw will be centering for him even though he’s a better wing. SCIENCE! My guess is that Michal Handzus and Ben Smith will yo-yo with each other to center the Patricks again, while Kris Versteeg will have the best seat in the house to watch Toews and Hossa run riot. As long as he doesn’t get in the way and put the other two consistently offsides with his impressionist work at the blue line, I’ll accept it.

The Hawks will see just as desperate a team as they did Sunday, though one in better position. The Flyers, Rangers, and Blue Jackets are engaged in a strange tango of silliness where one win can vault a team into 2nd in the Metrosexual division, and one loss sees a drop into the last wild card spot. The Flyers currently hold the second spot but with all three playing tonight any one of them could be there when the music stops and everyone grabs a chair.

The main threat, as always, is Claude Giroux who has been on fire the past couple months (and I think only didn’t make the Olympic team because Sidney Crosby hates him, which only makes him more endearing). Since Feb. 1 he’s got 18 points in 12 games and when he goes so do the Flyers. They also possess what has become possibly the best checking center in the game in Sean Couturier, though with his beard he basically looks like he should be yelling at invisible things under an overpass. Toews can expect this lunatic up his ass all night, just as Crosby had all weekend.

But as it always with the Flyers, their defense is a sketch comedy act for children. They swapped out Andrej Meszaros for Andrew McDonald, and I can’t tell you if that’s an upgrade or not. Braydon Coburn likes to break his face but not so much skate. Mark Streit is an excellent power play QB, but defensively he’s an excellent power play QB. Kimmo Timonen continues to defy Father Time but kind of has the same problem as Streit. Nicklass Grossman is another word for “guy,” and the less said about Luke Schenn the better.

And it’s all ably backed up by Steve Mason and Ray M. Murray. And not like backed up meaning supported but like when that black, flaky shit spurts out of your shower drain like a demon’s spunk. Mason signed an extension and then promptly went into the toilet. M. Murray gets the start tonight, his first since January and he doesn’t have a SV% over .900. There will be goals tonight.

While the Hawks can’t look past this one to tomorrow night, they really should have their way with this blue line. It’s not good and it’s not all that mobile. And where it is mobile it’s in all the wrong directions. The forwards who make life hell on the forecheck for the Flyers aren’t all that quick and the Hawks should be able to escape their clutches before they get there. But give Giroux and inch or too many looks on the power play and you’re in trouble. Letting Simmonds and Hartnell hack away in front of the net could spell doom as well. But the Flyers can’t gun with the Hawks and they’re hardly defensively solid enough to keep them contained for 60 minutes. Should be fun either way.

What If The Lockout Is A Good Thing? 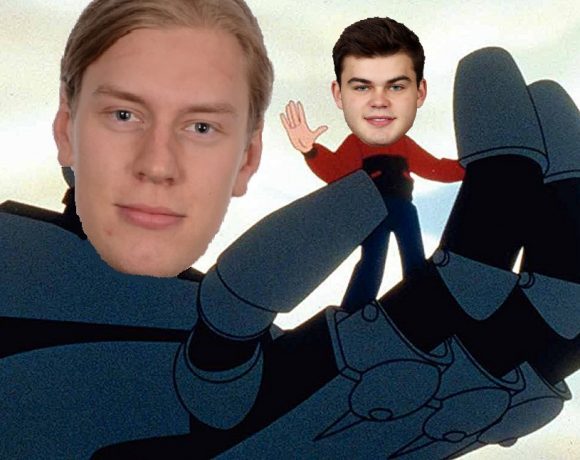 Well Pilgrim, Not Until You Eat The Peanuts Outta My… – FFUD’s ’17-’18 Player Reviews – Victor Ejdsell or I Am Not A Gun