High On The Hog: Bring Out The Brooms

The Rockford IceHogs broke a three-game losing streak with three wins in three weekend games. Some returning players played a big hand in a big win in Milwaukee Friday along with home triumphs Saturday and Sunday over two of the stronger teams in the AHL’s Western Conference.

The defense was outstanding for the weekend sweep. Rockford allowed just a single goal in each of the three games. The effort was enough to pull to within a point of Milwaukee for the Midwest Division lead.

There was a lot of roster movement this past week.

Hello (with apologies to Lionel Ritchie): Rockford signed forward Dane Walters, a former Western Michigan skater, to a professional tryout contract on Tuesday. Walters skated on the fourth line in all three IceHogs victories. The 5’11” wing had a role in Sunday’s win over San Antonio to boot.

On Thursday, Rockford called up D Kirill Gotovets from Indianapolis of the ECHL, though Gotovets was not in the lineup this weekend.

Goodbye (with apologies to Night Ranger): RW Ryan Hartman and D Kyle Cumiskey were recalled to the Blackhawks on Thursday.

Hello, Again (with apologies to Neil Diamond…on second thought, I will not apologize to Neil Diamond. Apologies to The Cars.): Joakim Nordstrom was sent back to Rockford on Wednesday, with Teuvo Teravainen following the next day. Brandon Mashinter was back in the lineup this weekend after being suspended for a pair of games. Cody Bass also returned from a two-game suspension for Sunday’s contest.

Defenseman Viktor Svedberg was seen around the BMO wearing a walking boot and hasn’t been in the lineup since January 31 in Chicago. Matt Carey has an upper body injury and also did not skate this weekend. Alex Broadhurst is still a ways from getting back into action with the upper left arm that was broken back in November.

One of the many pre-game traditions in Rockford is to announce the visitors starting lineup with a silly video while everyone responds to each starters name with a loud, “SUCKS!”.  This goes back to the UHL days. Occasionally, former IceHogs are afforded exemptions to this proclamation but you get the picture.

In recent months, the team has stopped running the video and has been announcing the visiting starters right after they list the scratches for both teams. Along with lamenting the loss of the opportunity to inform visiting players of their level of suck, I wonder when and from where the mandate came that this practice be curtailed.

The strange thing is that the team still plays “Mony, Mony” after Hogs goals so that we can shout to the heavens that the visiting team’s goalie, in fact, sucks. Apparently the skaters on the team are off-limits, but we can tell the goalie he sucks multiple times (if the Rockford offense cooperates). Being a goalie is pretty tough.

Bring Out The Brooms

The IceHogs broke what was a four-game losing streak against the Admirals with help from recent returnees Joakim Nordstrom and Teuvo Teravainen.

The teams traded goals early in the first period on the same Milwaukee power play. After Dillon Fournier was sent to the box for holding, Rockford won control of the puck and entered the Ads zone. Phillip Danault took a shot that missed the net but came out to Stephen Johns at the top of the right circle. Johns sent a blast to the net, where Danault deflected the puck past Marek Mazanec for the shorty 6:35 into the game.

Tristan Grant scored from the right post on a wide open net before Scott Darling could close the gap a little over a minute later to tie the score. The teams went to the first intermission at 1-1 and the score remained tied until the IceHogs got their second power play of the night when Austin Watson tripped Drew LeBlanc with 3:22 gone in the third period.

It was a Scandinavian passing clinic that produced the game-winner on the resulting man advantage. Ville Pokka started the play from the point, hitting fellow Finn Teuvo Teravainen along the right half boards. Teravainen found Joakim Nordstrom driving into the slot and the returning captain beat Mazanec to the glove side at the 4:07 mark.

Danault was voted the game’s first star while Nordstrom was the third star. Darling picked up the win by making 23 saves on 24 Milwaukee shots.

Rockford picked up its first win over the Barons in three tries this season. Oklahoma City came into the contest on top of the Western Conference but the IceHogs treated the fans to an impressive performance that saw them control the Valentine’s Day action.

The trio that provided the winning margin the night before hooked up again early in the game to give the Hogs the upper hand on the Barons. Like the night before, it came on the power play.

Joakim Nordstrom got the action started after winning the puck off the right half boards. Nordstrom skated between the circles and played catch with Teuvo Teravainen, who was on the right side. After some back and forth, Teravainen found Ville Pokka knocking at the back door and Pokka united rubber and twine 4:33 into the opening period.

Some strong penalty killing followed for Rockford as the IceHogs saw Dennis Rasmussen and Peter Regin enter the sin bin in quick succession midway through the period. Phillip Danault nearly had his third shorthanded goal in as many games before being called for a slash. Rockford had to kill a lengthy 5-on-3 sequence but did so in impressive fashion.

The lead was extended to two goals late in the second period when Pokka picked off an errant Matrin Gernat pass at the right circle. Pokka’s shot rebounded off of Barons goalie Laurent Brossoit and lay seductively in the slot. Enter Brandon Mashinter, who makes his living dealing with scraps (in more ways than one). The big forward sent the puck home with 1:03 remaining in the middle frame to send the Hogs to the locker room with a 2-0 advantage.

An Andrew Miller deflection got past Michael Leighton two minutes into the third period, but that’s as close as Oklahoma City would get. A few minutes later, the IceHogs would restore the two-goal lead as Peter Regin broke a long goal-less drought.

Regin, who hadn’t put a biscuit into a basket in two and a half months, got in front of the net after sending a puck from behind the net out to T.J. Brennan up top. Brennan sent it along to Zach Miskovic along the blue line and Regin deflected the resulting shot past Brossoit at the 5:24 mark.

A sweep of the weekend was completed behind another strong performance by goalie Scott Darling and the IceHogs defense. San Antonio came into the contest as the AHL’s highest scoring team but were stifled by Rockford most of the afternoon.

Brandon Mashinter gave Rockford an early lead when he made his way into the slot. Peter Regin, who had collected his own dump in in the right corner, made the pass and Mashinter buried the shot attempt past Rampage goalie Dan Ellis.

San Antonio knotted the game 6:42 into the middle stanza after a scrum in front of the net saw Connor Brickley knock the puck past Darling.

The IceHogs got the game-winner from their fourth line midway through the third period. A shift after a Mark McNeill power move to the net was denied, Dane Walters attempted a similar trek around the San Antonio goal. The wraparound attempt clanged off the skate of Cody Bass and beat Ellis at the 9:53 mark. Rockford limited the Rampage to seven shots in the final 20 minutes and held off six skaters for the last 90 seconds when Ellis was pulled from net.

Darling, 29-30 on San Antonio shot attempts, was the first star of the game. Bass, who was returning from a two-game suspension, was handed second star honors for his presence in front of the net.

Rockford hosts the Rampage again in a 10:30 a.m. start for the Rockford area schools on Wednesday. The IceHogs then travel to Lake Erie for Friday and Saturday night tilts. 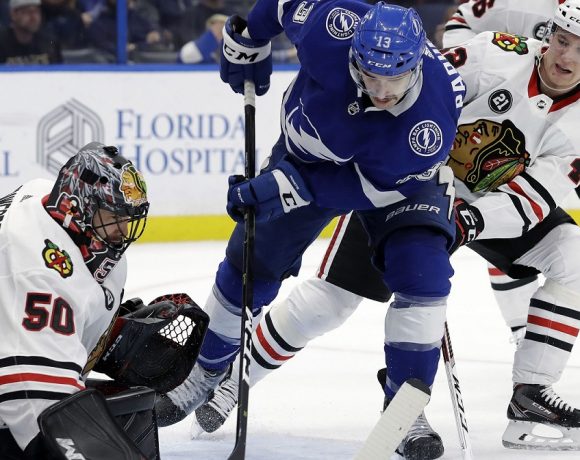