High On The Hog: Tails From The Road

The Rockford IceHogs are preparing to finish up their longest road jaunt of 2014-15. So far it has been a productive one with the Hogs taking five of six points in their first three games of the trip. Rockford bested Adirondack and Hamilton on Thursday and Saturday before losing a shootout to Toronto Sunday afternoon.

Despite the impressive results this week, the IceHogs reside in fourth place in the AHL’s Midwest Division with those five points. Rockford sits in the eighth spot in the Western Conference after the first full week of action.The road show concludes Wednesday night in Rochester before Rockford returns home for two weekend contests.

The Blackhawks got Kyle Cumiskey through waivers and assigned him to Rockford on Friday. Either a defenseman was going back up or someone was bound for Indy. Saturday, the other shoe dropped as Dillon Fournier was loaned to the Fuel. Fournier, who is in his first pro season, hadn’t appeared yet in a regular season game for Rockford.

Klas Dahlbeck continued to wear an A while the IceHogs were out East. Also donning letters were new faces T.J. Brennan and Pierre-Cedric Labrie. Cody Bass, who along with Dahlbeck wore the As on opening night, hasn’t been in the lineup on the road trip.

The Week In Review

It was a blue line party last Thursday as the first three IceHogs goals were off the sticks of defensemen T.J. Brennan, Viktor Svedberg and Klas Dahlbeck. Rockford rallied from a 2-1 deficit with three goals in the final ten minutes of action.

Down 1-0 after one period, Rockford came into the Flames zone with Teuvo Teravainen leading a 3-on-2. Terevainen and Regin traded passes with Regin going behind the net to corral Teravainen’s pass off the end boards. Brennan took a pass from Regin at the point, skated to the left circle and fired past goalie Brad Thiessen’s blocker to tie the game two minutes into the second.

Svedberg goal came midway through the final frame with the IceHogs down 2-1. Garret Ross swiped a puck from John Ramage and found Svedberg at the left circle for the equalizer. Five minutes later, the power play potted the game-winner when Regin collected a blocked Steven Johns attempt and found Dahlbeck at the left dot.

Regin added an empty netter in the final minute to seal Rockford’s first win of the season, giving him a goal and two assists on the night. Dahlbeck and Svedberg were named the game’s first and third stars, respectively.

Darling made 34 saves on the evening as the IceHogs rallied Saturday night to win their second straight road game. The Bulldogs got on the board in the third minute after LeBlanc lost a faceoff in the offensive zone. An odd man rush the other way resulted in a Christian Thomas goal. Darling stopped the initial shot by Nick Sorkin but Hamilton had too many bodies crashing the net to prevent the tally.

Rockford tied the contest at about the same point of the middle stanza and was started when Nordstrom cleared his zone from along the boards. Rasmussen brought the puck into Hamilton territory on the left side and dropped a pass back to Klas Dahlbeck. The shot was off goalie Mike Condon’s pads but the man who started the play, Nordstrom, calmly gathered in the rebound and maneuvered past Condon to make a deposit in the Bank of Hamilton.

Things remained knotted for the rest of regulation. In the sixth minute of overtime, Cumiskey swiped a Hamilton pass and went end-to-end to put a shot on goal. Condon stopped the attempt but Broadhurst collected the rebound and passed to a wide open Regin for the game-winner.

(Note: I did not see the above goal as the AHL Live feed, which was already terrible, abruptly went kaput with 1:44 left in regulation.)

Darling was a big reason Rockford was in a position to take two points but could only muster a second star nod from the press box. Regin was awarded the first star for his second goal of the season.

Lines (Again, the feed was like watching an antenna broadcast while ice fishing in Brainerd, but I think I got ‘em.)

Both goalies, Michael Leighton for Rockford and Antoine Bibeau for the Marlies, turned away numerous scoring chances throughout 67 minutes of regulation and overtime. The IceHogs had four power play chances but couldn’t convert.

Nordstrom and Teravainen found the back of the net in the shootout to match Toronto’s first two shooters. Brennan and Ross were stopped by Bibeau before Marlies forward Greg McKegg beat Leighton to the glove side. Broadhurst was victimized by a Bibeau pokecheck to snap the two-game win streak.

New AHL rules have teams playing 3-on-3 following the first whistle after the four-minute mark of overtime, which lasts seven minutes. It is interesting to watch as the coach could elect to use two forwards or two defensemen. IceHogs coach Ted Dent went with the following combos:

I personally wonder why Danault sat out the past two games. Could be he’s dinged up, could be a message from Dent. I thought he played pretty well Thursday but there is also no word of an injury. Hopefully we see Danault on the ice Tuesday night in Rochester.

The play in goal has been excellent for the IceHogs throughout the first four games. Leighton played well enough to win both his starts and Darling has really been impressive.

The Toronto broadcast team kept referring to Regin as “Peter Region” Sunday. Oh, well. As opposed to the night before, I could see and hear the entire broadcast. It was heartening to see Rockford come in to its third game in four days and put in the effort. 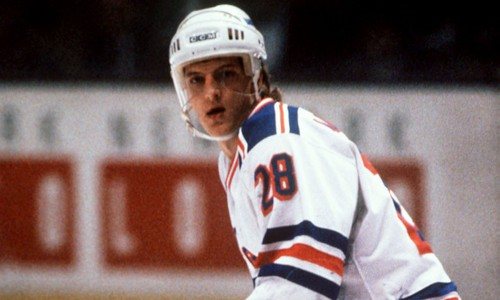 How Good We’ve Got It 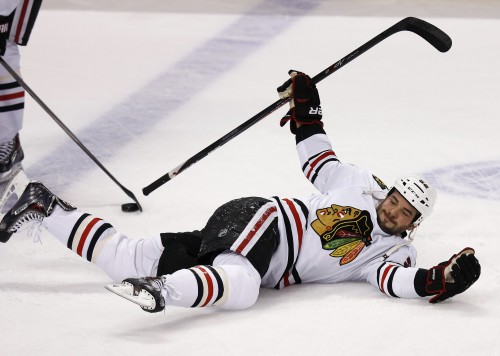 Where Have All The Good (3rd Period) Times Gone? Or Have They?