High On The Hog: Wrapping Up The Season 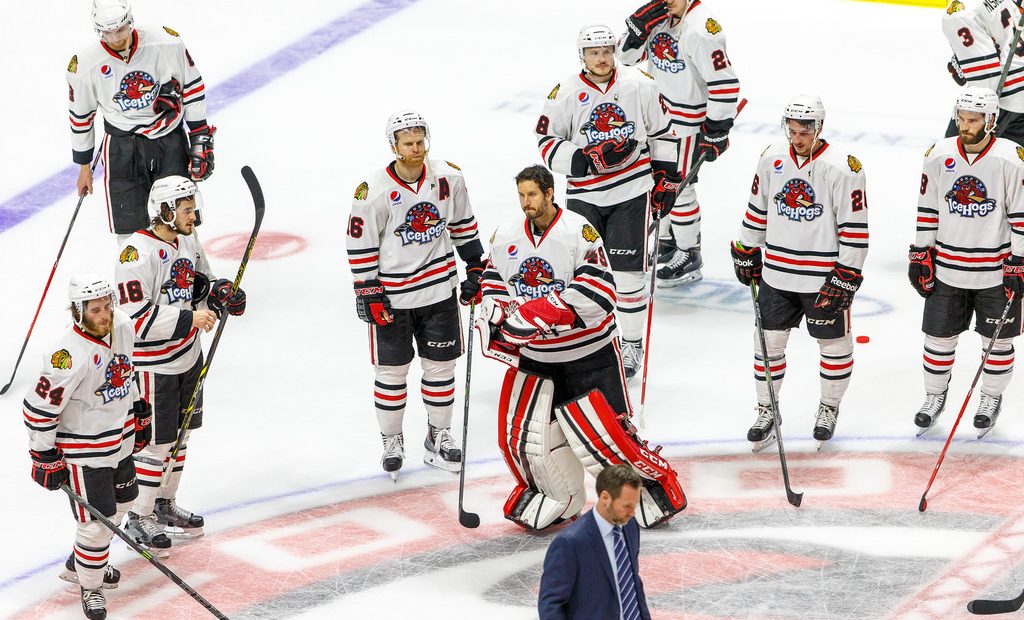 The Rockford IceHogs have put the 2014-15 season in the rear view mirror. It was a memorable campaign for many reasons. Several rookies made impressive pro debuts, a couple of veteran skaters won the hearts of the Rockford fans and the Hogs made the second round of the playoffs.

This year’s version of the IceHogs made some memories…but this is the AHL. Things are gonna change, regardless of how warm and fuzzy the feelings are about this group.

Before we move on, let’s quickly recap the season that was for Rockford.

The IceHogs drew more fans per game than ever before, averaging 4834 in the BMO Harris Bank Center. Those fans saw an exciting brand of hockey that saw Rockford go 46-23-5-2 on the way to a fourth-place finish in the AHL’s Western Conference.

By avoiding the tepid start of previous seasons, the Hogs were able to stay at or near the top of the conference standings for most of the campaign. Rockford stayed afloat in the middle of the season and parlayed a hot spring into the playoffs.

The IceHogs survived a log jam on defense in the first few months as well as a bit of famine when Adam Clendening, Klas Dalhbeck and T.J. Brennan were all dealt. Scott Darling earned a spot behind Corey Crawford in Rockford, but all the goal tending was excellent. It was certainly the catalyst for the team’s success.

A slew of players pitched in to the offensive effort. For the first time in the team’s AHL history, no IceHogs player totaled 50 points for the season. However, scoring was spread out throughout the lineup. The stingy defense (surrendering just 180 goals, 2nd best in the AHL) more than took the place of a dominant scorer.

Brennan sparked the offense in the early going, with the player he was sent to Toronto for, Spencer Abbott, caught fire post-trade deadline to pace the club in the final weeks. In 19 games with the Hogs, Abbott had 21 points (12 G, 9 A).

Line mates Mark McNeill and Garret Ross battled for top goal-scoring honors all season. McNeill wound up with 23 to lead the Hogs, while Ross finished with 21. Brandon Mashinter chipped in with 17 tallies. Phillip Danault, Ryan Hartman and Dennis Rasmussen all contributed 13 goals.

After sweeping the defending champion Texas Stars, the IceHogs ran into a talented Grand Rapids team that was playing lights out in the last two months of the season. The Griffins ended Rockford’s playoffs in the Western Conference Semifinal four games to one, but the shine still remains on the 2014-15 season.

Where do we go from here? Let’s see how things could look come fall, starting with the coaching staff…

IceHogs coach Ted Dent just completed his fourth season at the helm and it wouldn’t surprise me to see him patrolling the bench for a fifth. Next season will be his tenth in Rockford, having been an assistant for five seasons for Mike Haviland and Bill Peters.

Dent has had a hand in developing the talent in the Hawks organization, though I don’t know if he’s head coaching material at the next level just yet. There were rumblings about his joining Randy Carlyle’s coaching staff in Toronto last summer, so maybe he’s ready to see what’s out there in terms of NHL opportunities.

I’m occasionally bemused when Dent’s lineups meet with criticism in the stands, as it’s pretty apparent that he is taking his cues from the top of the organization. Icing some recent arrivals late in the season with playoff position still to be decided wasn’t something Dent initiated in all likelihood.

If Dent moves on to his next coaching stop, assistant Mark Osiecki could well step into his shoes. Osiecki was Dent’s assistant for the past two seasons and was the head coach of the U.S. World Junior entry this past January.

As for the players, let’s start with the veterans. Remember, the Blackhawks priority is developing prospects, not sating the crushes of Rockford’s fan base. If you expect the Hogs to reassemble the old gang and make another run at the Calder Cup, expect disappointment.

There isn’t a lot of history with guys spending long stretches in Rockford like they do in Chicago and other AHL cities. Wade Brookbank, who is now a scout with the Hawks, spent several seasons on an AHL deal with the IceHogs. That has been the exception and not the norm in Rockford, however.

Peter Regin, to the surprise of no one, had a contract signed with another organization before the IceHogs were eliminated from the playoffs. He’ll be playing for Jokerit in the KHL next fall.

Pierre-Cedric Labrie endeared himself to the BMO fans with his rugged style but it’s hard to see him back in a Hogs sweater come fall. The same likely goes for Cody Bass. It’s possible the Hawks decide that Labrie, who was reportedly a big locker room presence, is worth another two-way contract to mentor what will likely be a young club. I’m not holding my breath.

Michael Leighton kind of fell into the Hogs laps when he decided to stay in North America and signed with the Blackhawks late in the summer. Hopefully the organization notices how a solid veteran in the crease changes the fortunes of a young club. If the goalie situation in the organization remains a three-man operation, I’d expect Antti Raanta to be the main man in net.

Who backs him up? Last year at this time, I would say that Mac Carruth would not have much in the way of a future in the Blackhawks organization. He was very solid in limited appearances in Rockford and had a good season in Indianapolis. Does that earn the RFA another contract? We’ll see.

Abbott is likely going to move on after boosting his stock with a hot finish after coming aboard this spring. Drew LeBlanc is almost certainly not going to be re-signed. If you want to know why, go back and read this.

Defenseman Viktor Svedberg sure didn’t hurt his standing with the Hawks in the last month of action; just not sure he helped his cause enough for an extension. He couldn’t have written himself a better role in the Hogs late season push.

Playing top line minutes with Stephen Johns provided the opportunity Svedberg needed and he may just remain in the organization because of it. Was named a black ace in lieu of the injured Johns, gaining a week or two to further make his case.

As the arrow may be pointing up slightly on Svedberg’s chances at remaining in the organization, they may have dipped in the opposite direction for center Matt Carey. Carey was not bad in his first pro season (10 G, 11 A) but was a minus skater and found himself in the pressbox on several occasions as the season wound down.

I could see the Hawks taking another spin on forward Rasmussen, who appeared in a team-high 73 games in the regular season. The big Swede notched 27 points (13 G, 14 A) and was a plus-nine with a lot of minutes logged on special teams.

Rockford had seven players under AHL deals this season. Defenseman Zach Miskovic was by far the most frequently used, skating in 42 games. He really connected with the Rockford community and seems receptive to coming back in what would be a veteran role similar to that of Brookbank.

Miskovic skated a little at forward when numbers were thin in the middle of the season. The fact that he’s comfortable in the organization may see him return.

Kirill Gotovets was a useful player in the final weeks on the blue line. Keith Seabrook held down a spot on the third defensive pairing, though I don’t think he merits a two-way NHL contract, he could keep his career re-boot going in Rockford on an AHL deal.

Justin Holl spent the bulk of his season in Indianapolis. Depending on the defensive landscape in Chicago, he could wind up getting a chance to skate in Rockford.

Ryan Schnell doesn’t figure to be back, though Dane Walters and Jamie Wise could be back in town on the offensive side.

Obviously, a lot depends on how the Hawks summer progresses and how many spots are open with the big club heading into camp. I am going to operate on the assumption that Teuvo Teravainen and Joakim Nordstrom are on Chicago’s roster in the fall.

Forwards: Danault, McNeill, Ross and Hartman figure to be in the mix in Chicago but may spend time in the Rock.

Kyle Baun and Tanner Kero will probably start the season in Rockford, as will Vince Hinostroza. Alex Broadhurst is back for his last year of his entry deal. With mixed results in two Rockford campaigns, it is a pivotal one for him.

Mashinter, who tied for second on the team with Labrie and Schnell with seven fighting majors, also was third on the team with those 17 goals (Abbott had 19 but just 12 with the IceHogs). Six of those came on the power play, which led the team. He is under contract for next season as well.

Defense: Right now, it’s hard not to see Stephen Johns in the mix for a spot in Chicago. Trevor vanRiemsdyk has a lot of work to do this summer to get his skating back to where it was when he made last year’s Hawks team out of camp. I’m not penciling him into a roster spot with the Blackhawks. Call me pessimistic, but his legs have taken a beating the last two seasons.

Ville Pokka, last season’s rookie of the year in Rockford, looks to get an increased role with the Hogs. Chicago’s other defensemen under contract include Dillon Fournier, looking to stick in Rockford for the whole season, and new signing Erik Gustafsson. Robin Press, Robin Norell and Calle Dahlstrom could surface in Rockford if they don’t choose to play in Sweden.

Matthieu Brisebois still has a year on his entry deal with Chicago after coming aboard in the trade that brought David Rundblad to the Hawks. Brisebois was in Indianapolis for 31 games and was loaned out to Rapid City of the ECHL for another 36 games. Not being called up to Rockford in favor of AHL skaters like Seabrook and Gotovets doesn’t bode well for his prospects.

Of course, we’ll have to factor in a new crop of prospects sprinkled in with a veteran signing or two when piecing together next year’s IceHogs. We’ll see what the future holds in Rockford as the summer progresses.

I had a blast being your correspondent out in the sticks this season. Hope you found a nugget or two of useful information. Until next season, I’m down on the farm… 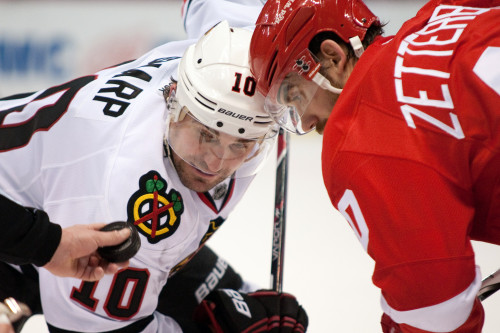 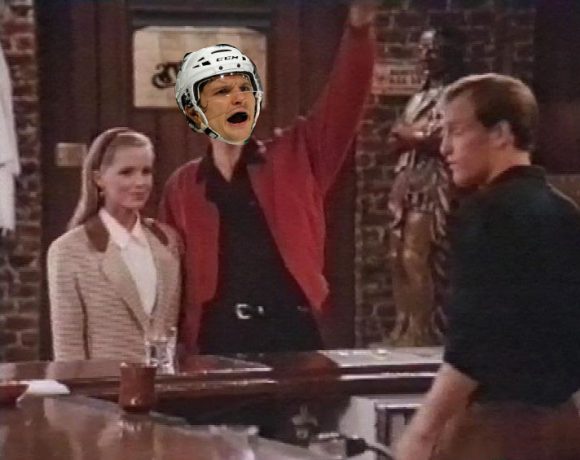 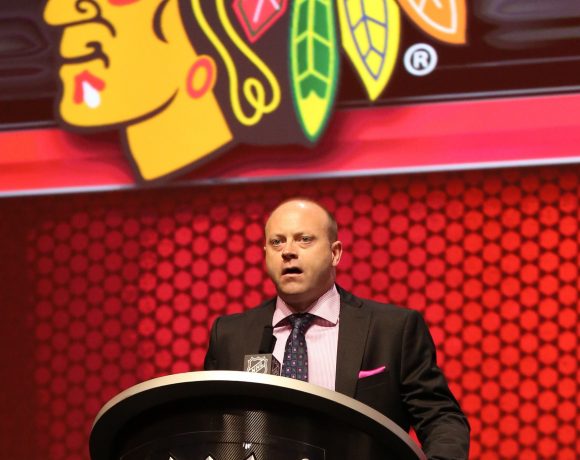