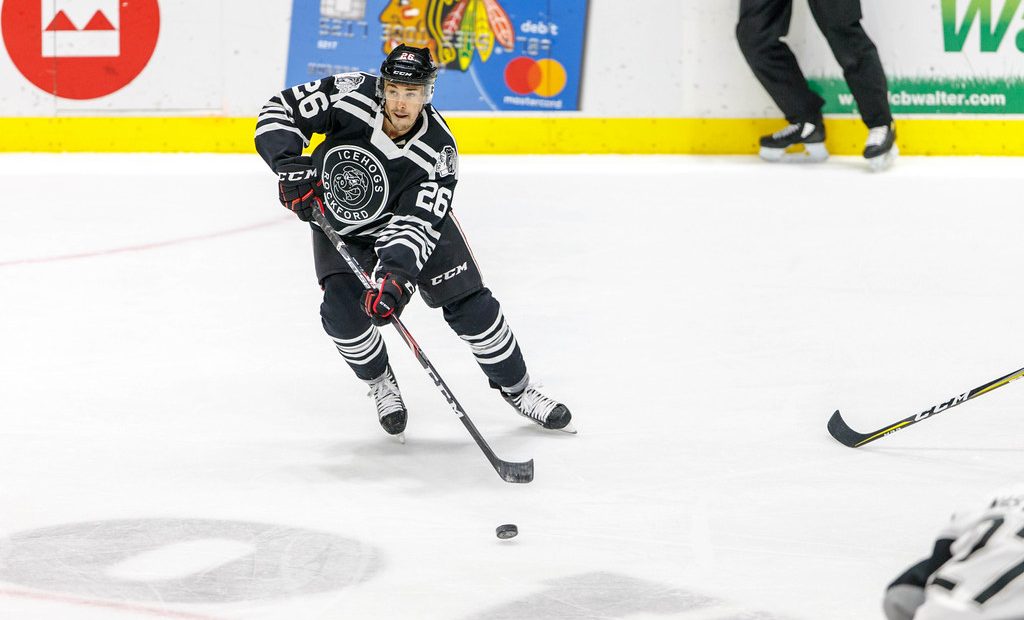 The Chicago Blackhawks were hoping that they had found a diamond in the rough when they signed undrafted free agent Alexandre Fortin to an entry contract back in 2016. After dazzling the organization at that year’s prospect camp, Fortin turned in a solid effort in training camp and earned a three-year deal.

That entry contract is set to expire at the close of the 2019-20 season. Fortin, who showed so much promise when the ink on his contract was still drying, is in his third season with the Rockford IceHogs. Did the Blackhawks strike it rich?

Fortin was very noticeable on the ice at the BMO this weekend, where the IceHogs split a pair of games with San Antonio. As he enters the final months of his third pro season, Fortin is eyeing what may be his final chance to realize some of the raw potential he showed in the summer of 2016.

Fortin was passed over in the 2015 and 2016 NHL drafts. The Blackhawks invited him to prospect camp after Fortin finished his junior season with Rouyn-Noranda of the Quebec Major Junior Hockey League. With the Huskies, he was ninth among team scorers with 19 goals and 24 assists in 54 games.

Here’s what was being said about Fortin at the time of his signing. These quotes are from a Scott Powers article that ran in The Athletic back on September 25, 2016.

“He’s a smart, cerebral kid who has a nice offensive skillset he’s been able to show early. He’s off to a real good start and trying to find a way into one of our exhibition games.”-former Blackhawks assistant coach Kevin Dineen.

“I think he earned a contract. Right from the start, he stepped up and played. He’s been very consistent in every scrimmage. He’s been a threat to score out on the ice. I think he’s done a terrific job.”-former Chicago assistant Mike Kitchen.

Fortin’s ELC slid for one season while he finished his junior career with Rouyn-Noranda in his final campaign in the QMJHL, he totaled 52 points (22 G, 30 A). Decent numbers but not eye-popping in what is considered a high-offense league.

Fortin’s rookie year in Rockford yielded four goals and 17 assists in 53 games. He was called up early in the 2018-19 season and spent two months in Chicago. There, he collected his first NHL goal on October 21, 2018. This prompted a quote from Blackhawks coach Joel Quenneville to Tom Musick of the Chicago Sun-Times:

‘‘He creates space and speed. He’s dangerous in that way.”I think defensively and technically, he’s getting better every game. . . . You’ve got that ingredient [of speed] that you don’t want to slow down.’

Fortin totaled six points (3 G, 3 A) in 24 games with Chicago before being sent down to the IceHogs in mid-December. In 47 games with Rockford, he wound up with six goals and six helpers. Most of his goal output came in a pair of two-goal performances against the Chicago Wolves December 21 and February 1.

Fortin has been injured a couple of times in this current season. He was injured after a six-points in five game (3 G, 3 A) stretch at the end of November and was out a month. He missed a month, returned for three games, then was out another two weeks.

Since returning, Fortin had been scoreless up until this week. He had a two-assist performance in Tuesday’s win over Texas and a spectacular individual effort Friday to help Rockford beat San Antonio.

This weekend showcased Fortin at his best. A quick, hard-working defensive forward. Unfortunately, the weekend also showcased his limitations in terms of the impact he could have in the NHL.

The kid created a ton of scoring chances, especially on Friday, but converted on just one. Let’s not downplay the importance of that goal or the effort involved. It was a great play. However, on the whole, Fortin does not possess the puck skills to consistently take advantage of the opportunities his feet create.

Fortin does create space with his skating ability. He hustles after the puck and is an effective fore checker. Fortin also finds himself frequently losing the handle on pucks coming down the ice . This has improved some over his time in Rockford. However, it still is an issue even at the AHL level.

Friday’s goal was just his fourth of the season. His shooting percentage of 6.8 percent is one of the lowest of the regular forwards. He is a bottom-six player in Rockford and has been for most of his time with the IceHogs. His offense just hasn’t developed all that much in three seasons.

What can you say about Fortin’s future in the organization? Well, the next couple months are key. Fortin will be an RFA this summer. If he stays healthy and can stick some of those scoring chances into opposing nets, he might be re-upped for another season.

Rockford prevailed 1:14 into the extra skating session. John Quenneville provided the game-winner to give the IceHogs consecutive victories for the first time in almost two months.

After neither team dented a net in the opening twenty minutes, Rampage forward Klim Kostin powered to the Rockford net and slipped the biscuit past Hogs goalie Collin Delia in the first minute of the second period.

Late in the middle frame, Alexandre Fortin outstanding individual effort led to shorthanded equalizer. Fortin, who created several breakaway opportunities on the evening with his skating, pounced on an errant pass in the neutral zone and made a beeline for the Rampage net.

The end result was a sliding deke that allowed Fortin to flip the puck past San Antonio goalie Adam Wilcox, tying the game 1-1 at 18:35 of the second period.

The IceHogs took a 2-1 lead 13:50 into the third period while the teams were skating four to a side. Dylan McLaughlin brought the puck out of the Rockford zone to lead the rush, though his shot attempt was denied by Wilcox. McLaughlin regained possession and skated around the offensive zone until Nicolas Beaudin pinched into the slot. Beaudin’s third goal of the season quickly followed.

Just over a minute later, Austin Poganski pulled the Rampage even, knocking in a loose puck in a goal-mouth scrum. It remained 2-2 through the end of regulation.

Quenneville’s Gus Macker heroics were set up by Dylan Sikura and Lucas Carlsson. After a Mike Vecchione shot attempt went wide of the Hogs net, Sikura the Younger won a board battle for possession of the puck. Carlsson hauled in the pass and headed up the right side, fighting off Vecchione all the way. The contest ended on Quenneville’s strike from the left dot.

Quenneville was voted the game’s First Star, followed by Beaudin and Fortin. Delia posted the win with a 22-save effort.

The Rampage took the rematch in another physical, back-and-forth contest. Rockford’s win streak was halted at two games.

The hero from the previous evening, John Quenneville, opened the scoring 13:28 into the first period. With the Hogs on the man advantage, Quenneville took a pass from Lucas Carlsson and sent a shot from the top of the right circle into the upper right corner of San Antonio goalie Ville Husso’s net.

Rockford held that 1-0 lead until the final minutes of the first, when Nathan Walker brought the Rampage even, avoiding a poke check attempt by Collin Delia and five-holing the Hogs goalie.

San Antonio would go up 2-1 46 seconds into the middle frame when Mike Vecchione knocked a loose puck past a prone Delia. The IceHogs would tie the game late in the second, again on the power play.

This time, Carlsson sent a blast from the point that struck the crossbar and settled behind Husso. Gabriel Gagne was on hand at the left post to deliver the equalizer into the cage at the 16:21 mark.

The Rampage got the eventual game-winner past Delia 6:58 into period three when Mitch Reinke fired from the outside of the right circle. The offering got over Delia’s shoulder and caught the far side of the net.

After going 2-3-0-1 on their longest home stand of the season, Rockford heads to Manitoba for back-to-back games with the Moose Wednesday and Thursday. The Hogs return to the BMO Saturday night to host Cleveland. 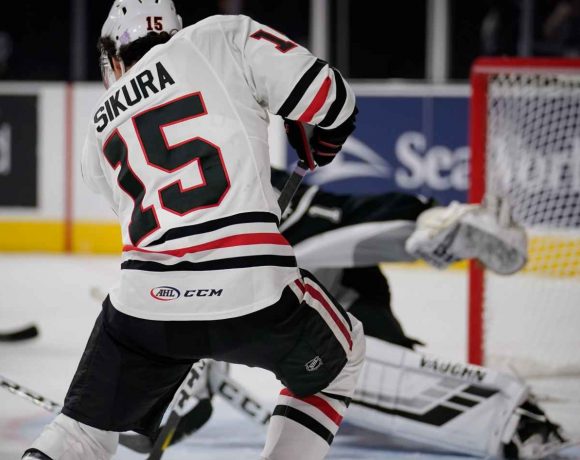 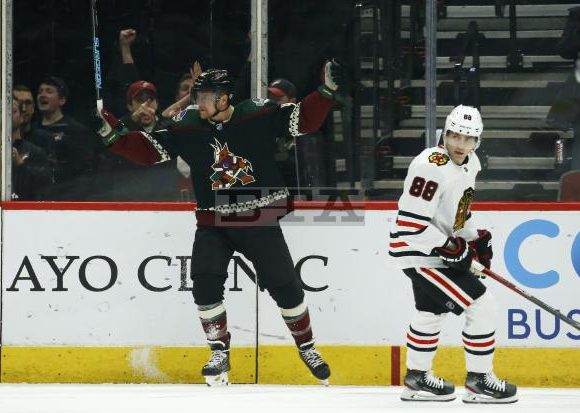 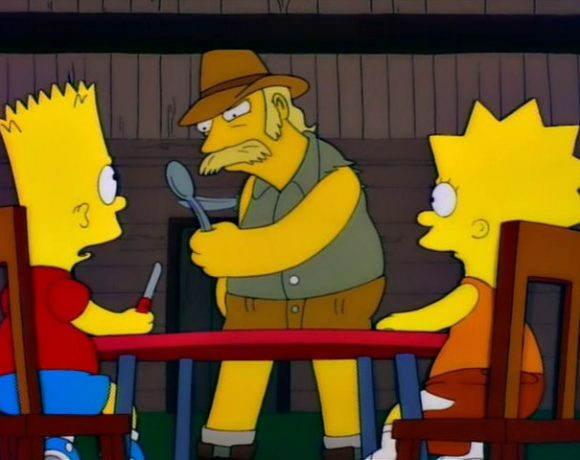