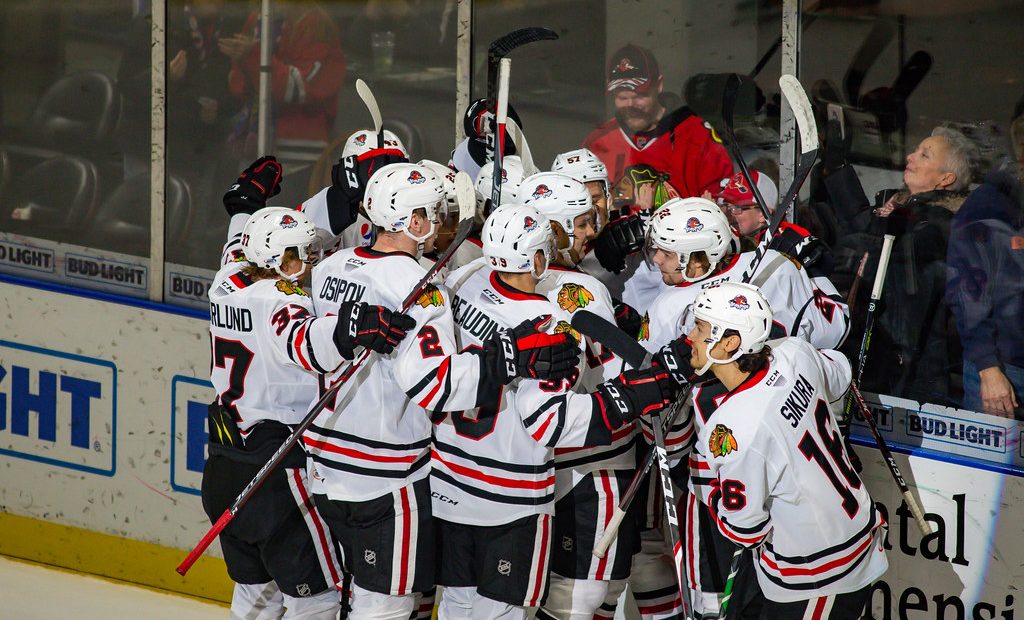 The Rockford IceHogs have a pair of home games this weekend, hosting Texas Friday and Cleveland Saturday. Coach Derek King’s club is 16-10-0-1 as the holidays approach. As promised, here are some musings on the piglets as I clear my head Spongebob-style in preparation for a Star Wars kind of day.

The IceHogs dug themselves out of a hole to post a win in the final game of their Canadian jaunt.

Laval went out to a 2-0 lead, using the special teams to do so. An early power play chance resulted in Charles Hudon’s snipe from the right circle 1:52 into the contest.

The Rocket would be given three shots at the man advantage in the period. Rockford had a short power play stint go bad when the Hogs left Alexandre Alain all alone in the slot when trying to set up in the defensive zone. Josh Brook got him the puck and Alain converted past Hogs goalie Collin Delia at the 13:02 mark.

Rockford spent a good portion of the second period on the power play. However, it was while shorthanded that the Hogs got back in the game. Joseph Cramarossa picked off a pass by Xavier Ouellet, with whom he had scrapped late in the first period. Cramarossa raced down the ice and slipped a backhander through the five-hole of Laval goalie Keith Kinkaid. The deficit was cut to 2-1 at 12:46 of the middle frame.

The IceHogs drew back to even ground midway through the third period. Dmitri Osipov nabbed his first AHL goal, taking a shot pass from Philip Holm and firing from just inside the blueline. The shot got through Kinkaid and into the cage 11:14 into the period; neither team could break the tie in regulation or Gus Macker Time.

Delia, who made 31 saves and kept the Hogs in the game for the bulk of the night, stopped all five shooters he faced until Anton Wedin snapped the game-winner past Kinkaid.

Game #47 – Hawks vs. Senators: Lineups & How They Were Built