High On The Hog: Piglet’s Progress 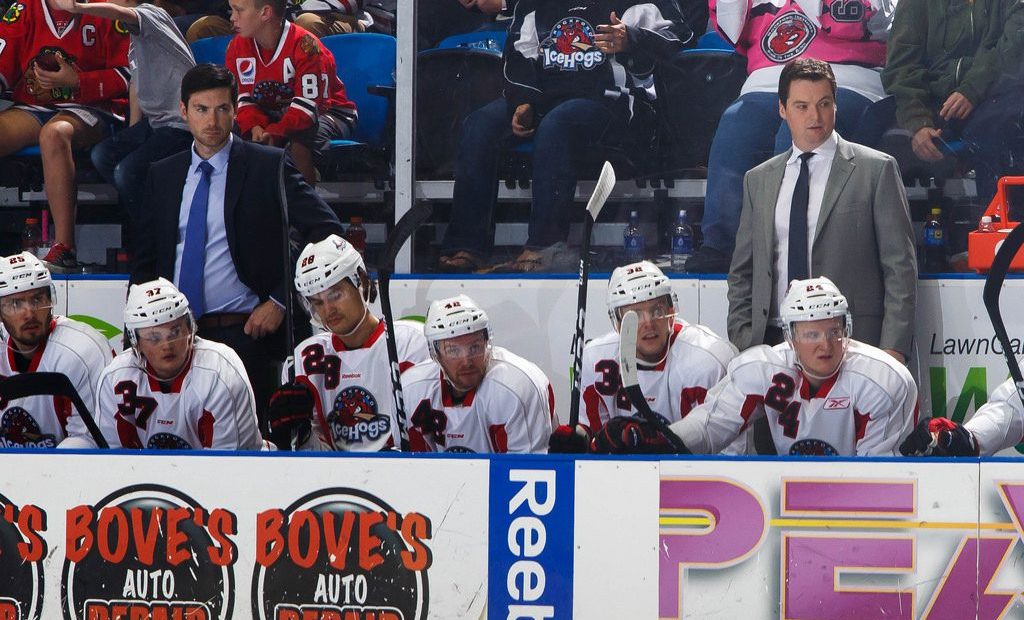 After hibernating for most of the summer, I’ve crawled out from under my rock to shine what will be my weekly spotlight on the Fabulous Skating Piglets of Winnebago County. Otherwise known as Chicago’s American Hockey League affiliate, the Rockford IceHogs.

Regardless of how things shake out with the Blackhawks roster, the ice at the BMO Harris Bank Center is going to be smothered in young ‘uns. The dearth of prospects that was more than evident last season has been rectified by a slew of signings last spring, as well as several over the summer months.

Both the Hawks and Hogs organizations have dutifully swept away pieces of the crew that limped to a franchise-worst showing in 2016-17. Coach Ted Dent is now on the staff of the OHL’s Niagra IceDogs. Longtime captain Jake Dowell is skating in Austria. Brandon Mashinter signed with the Sharks. P.C. Labrie will be a familiar face…when the Milwaukee Admirals come to Rockford.

Of last season’s AHL signings, only Robin Press (who came aboard mid-season) was brought back. I hope the IceHogs scrubbed out their locker rooms as thoroughly as they did the roster.

If you want a recap of last season’s wreckage, go back and read this. I lack the time or inclination to detail the failings of Stan Bowman in regard to assembling a decent squad last year. Safe to say that he has gone about his business a little differently in terms of setting things up in Rockford.

There are two basic strategies for setting up an AHL franchise:

A. You can load up with proven AHL veteran players, guys who are fringe NHLers due to something lacking but can dominate at the penultimate level of hockey.

B. You can load up with prospects, sprinkle in some mentoring-type veterans with NHL experience and hope everyone learns something before all is said and done.

Last season, Bowman did neither. What he did was send minimal prospects out with AHL role players. Bowman then spent the season removing egg from his face when that team couldn’t score or stop other teams from doing so.

This year, Bowman has picked a more workable model. He has inked lots of young prospects we’ve been reading about for the past few years. This group will have a lot of jelling to do, but should be vastly more entertaining to watch.

Understand that the Blackhawks have always used Rockford as a training ground rather than competing for Calder Cups. Developing prospects has been and will be the priority. There were lots of capable, experienced AHL scorers to be had this past summer. As per usual, they didn’t end up with the IceHogs. That’s not the way things work in this partnership and I have no issue with the lane the organization elects to use.

What the team seems to be lacking is that contingent of veteran leaders. Players who have logged some mileage in the NHL and can help season a young team. Usually, the Blackhawks sign a player of that type in the summer to a two-way deal knowing full well he’ll spend the season in Rockford.

Could a player like Lance Bouma, Tommy Wingles or Jordan Tootoo find his way through waivers and onto the Hogs roster? Maybe Chicago brings a veteran piece aboard this week. For now, this is a team very short on elder statesmen.

Rosters are still kind of fluid, but I feel like there enough spots decided upon to formulate what the IceHogs will send out to Cleveland to open the 2017-18 campaign Saturday night. Let’s see what kind of hand Rockford fans have been dealt this fall…

Listings will be divided into NHL and AHL contracts. AHL rosters are infinite as there is no limit to how many players they can have on them. I will work within the limits a 23-man team, but the final total could be higher. Rookies will be in italics.

It is this area that the new-car smell will be most prevalent. The Hogs could have as many as ten first-year players at forward when the season starts.

A lot depends on how the bottom of Chicago’s roster shakes out. DeBrincat would be welcome at the BMO any time the Hawks deem to send him here. If he makes the big club out of camp, there are still three or four players who may come down to Rockford. That list would include John Hayden and Vinnie Hinostroza, who would be solid additions to the Hogs.

Tomas Jurco, Bouma, Wingles and Tootoo would have to clear waivers before heading to Rockford. No matter how the cookie crumbles, I would think Chicago sends at least a couple of players to the AHL this week. Perhaps Pelletier and Bondra remain with Rockford as AHL forwards, with Sikura sliding to Indy.

Do the Blackhawks nab a veteran stick on this side of the puck who could provide some steady offensive push, a la Spencer Abbott last season? All signs point to no, but that may need to change if goals were as hard to come by as they were in 2016-17.

How will this group perform? Well, Iacopelli has shown to be quite the sniper from what I’ve seen so far. Baun’s not a high output offensive force, but provides work ethic around the net that should result in decent numbers. Hinostroza was a big scorer in a full campaign with the Hogs in 2015-16, provided he winds up in Rockford.

Remember, with prospects, there are no guarantees (DeBrincat included). Someone has to put the puck in the net; the fun is seeing where the scoring will develop. The first task for the baby Hogs: finish scoring plays. This was in short supply a year ago.

Things will be much more familiar on the blue line, with most of the Hogs Nordic Corps back for another spin around the league.

If the Hawks keep eight defensemen, two of the AHL guys play in Rockford. I would guess that Press would be one of those guys.

This is a group that should benefit from a bit more hop in the forward lines. They’re better forcing the action in the offensive end. Dahlstrom’s a solid defender and Svedberg’s positioning has improved a lot in his time in Rockford. Pokka and Gustafsson should provide most of the offensive/power play spark.

Press is a big body out there; the question will be in how he defends. Snuggerud was impressive in his brief run with the team last spring and should be a regular. A defense-first veteran with some NHL miles on him would be a welcome addition, though I don’t think that’s in the cards.

In a perfect world, this developing team would have Delia as the backup for either Glass or Berube. The Blackhawks see some potential in the former Merrimack College standout. Other AHL clubs keep three goalies on the roster, so I suppose that could happen. At this point, however, Delia likely joins Tomkins to form the tandem in goal for the Fuel.

The combo of Glass and Berube is a good as any, I suppose. Berube’s last full season in the AHL was excellent; a 2.18 goals against average and a .913 save percentage in 52 games with AHL-champs Manchester back in 2014-15. Glass is a solid AHL-level goalie (as well as veteran presence in a locker room)  and the two look to be capable of getting the job done in the crease.

October has been kind to the Hogs. Rockford is 27-15-1-3 over the last five years in the first month of the season. Even last season’s club was 4-4 to open the campaign.

How long it takes for the rookies to get up to speed in the AHL way of life will have a lot to do with how Rockford fares in the standings. The Traverse City Tournament title won by the Blackhawks prospects was a positive sign, but coming out on top of other rookies doesn’t assure success in the AHL.

New coach Jeremy Colliton’s first priority is going to be player development. As Colliton pointed out after the team’s 4-3 loss to Milwaukee to open the brief exhibition season, however, “It’s tough to learn lessons if the winning and losing doesn’t matter.”

What lessons are this year’s crop of players going to pick up over the next six months? Time’s gonna tell; I’ll try to keep you abreast of the progress in Rockford.

The IceHogs open the season Saturday night in Cleveland. I will report on the season debut next week, as well as spotlight some players to watch on what should be a definite roster. I’ll also spend time dissecting the Hogs schedule, toss in any numbers I crunch in the evenings and share thoughts on anything new down on the farm.

For updates and team transactions, as well as my armchair thoughts on the doings in Rockford, follow me @JonFromi on twitter if you like. I’m looking forward to another fun season covering the IceHogs; hopefully we get better results in the win column. 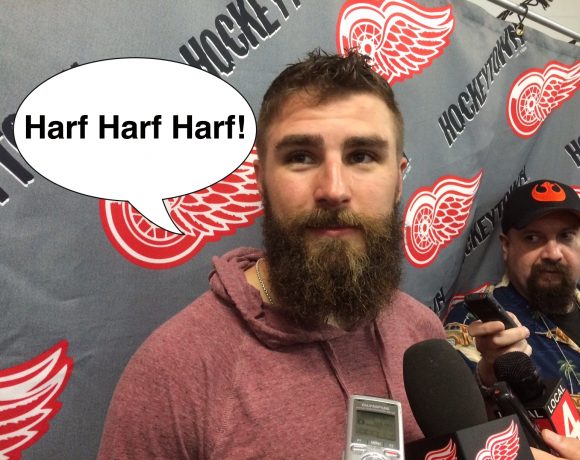 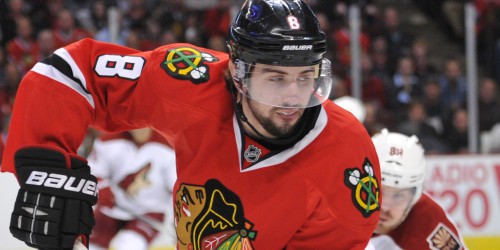