High On The Hog: Rocked In Cleveland

The Rockford IceHogs, AHL affiliate of the Chicago Blackhawks, were in extended preseason mode over the weekend, dropping a pair of games to the defending league champions.

It was a dismal weekend in Cleveland, at least for the boys in the red sweaters.

Rockford’s passing never really got on track in either of the two games with the former Lake Erie Monsters. Both IceHogs goals on the weekend were largely one-man efforts. The power play was 0-10 to begin the season.

Potential net-fillers like Ryan Hartman, Vinnie Hinostroza and Tyler Motte all up in Chicago. It would appear that the veteran-heavy Hogs had better develop some chemistry with the puck before the three-game weekend that approaches.

Both Brandon Mashinter and Mark McNeill cleared waivers last week and joined the IceHogs. The two were centered by Tanner Kero in the first two games.

Dillon Fournier was sent to the ECHL’s Indy Fuel on Thursday. This leaves Rockford with a 24-man roster consisting of 15 forwards, seven defensemen and two goalies.

IceHogs coach Ted Dent wasted little time crowning his captain, naming Jake Dowell to the post on Thursday. This will be Dowell’s third go-round as Rockford captain. He held the post for most of last season and also donned the C back in 2009-10.

Pierre-Cedric Labrie was named an alternate captain. This comes as no surprise since the veteran forward is starting his third season in Rockford.

Dent has several other players he could name in addition to Labrie. Mashinter has served both as alternate captain and captain in his tenure with the Hogs. On the defensive side, Cameron Schilling could also find a letter on his sweater in the coming weeks.

Several players with Chicago/Rockford ties faced off against the IceHogs this weekend, starting right from the top with head coach John Madden. A member of the 2010 Stanley Cup Champions, Madden replaces Jared Bednar, who is now head coach of the Colorado Avalanche.

Former Hog Alex Broadhurst hurt Rockford on the scoreboard on a couple of occasions this weekend. Former Hawks defenseman Sheldon Brookbank, who has been toiling in Europe the last two seasons, watched from the press box as a healthy scratch for the Monsters.

A weekend watching AHL Live broadcasts of the Hogs-Monsters games meant that I would get to hear the dulcet tones of Monsters radio announcer Tony Brown. If, by dulcet, I meant Wallace Shawn, who Brown resembles vocally when he is excited. Which is all the time.

Brown is an unabashed homer, which would bother you if he wasn’t so damn fun to listen to. Whether he is lauding the snap shot of Sonny Milano as a “lightning-fast release, as though from the heavens above,” or dubbing Brett Gallant as “arguably the best pound-for-pound fighter in all of hockey, in all the world,” this broadcaster is never at a loss for words, especially of the two-dollar variety.

“P.C. Labrie called for holding against Jaime Sifers…and while the veteran vociferously disagrees with the administration from our referee, Pierre Lambert, he’ll have to live with the consequences of his behavior…and we could all learn a lesson from P.C. Labrie right now as he accepts his fate.”

Vociferous: expressing feelings or opinions in a very loud or forceful way.

I read somewhere that if you can use a word ten times, you own that word. I vociferously pledge that by the end of the hockey season, I will own this word. And you will, too.

Cleveland raised a banner and then dispatched Rockford in the season opener for both teams. The defending AHL champions held the Hogs at bay until the final minutes of the contest.

The Monsters took the lead midway through the second period 51 seconds into their first power play of the season. Sonny Milano fired from just below the left dot into the upper corner of the far side. Hogs goalie Lars Johansson was screened and never had a chance. Cleveland led 1-0 at the 12:46 mark.

Former IceHogs forward Alex Broadhurst finished a scoring play for the Monsters just 25 ticks into the final frame. Broadhurst took a nice pass from T.J. Tynan at the right post and guided the puck into a wide open net for a 2-0 Cleveland advantage.

Late in the period, Tanner Kero took the puck from Viktor Svedberg in the defensive zone, skated to the opposite coast and got off a shot. The attempt that was half blocked by Jaime Sifers but managed to knuckle between the pads of Anton Forsberg to halve the deficit.

Rockford was fortunate enough to get a late power play with 52 seconds remaining. Despite pulling Johansson for a 6-on-4 opportunity, the IceHogs came up short.

The Monsters quickly established their authority, scoring in the opening minute on a bit of a broken play. Alex Broadhust’s centering pass to T.J. Tynan was thwarted by Rockford’s Erik Gustafsson. However, the loose puck hopped around all by its lonesome in the slot.

Cleveland’s Aaron Palushaj got there first ahead of the Hogs forwards and backhanded a shot past Mac Carruth’s stick side. The Monsters led 1-0 just 46 seconds into the game.

The special teams factored into the second goal of the night. Unfortunately for Rockford, it came at the expense of their own power play. Oleg Yevenko knocked Mark McNeill into Monsters goalie Anton Forsburg 5:29 into the second period, giving the IceHogs a chance to even things up with a man advantage.

Rockford struggled to get the puck into the Cleveland zone then gave up a shorthanded goal when Frank Hora cleared a puck just across the Hogs blue line. Tynan out hustled Ville Pokka to the biscuit, then streaked to the net and five-holed Carruth at 6:20 to make the score 2-0 Cleveland.

The IceHogs had a golden opportunity to get back into the contest when Brandon Mashinter was high-sticked by Jordan Maletta. Rockford had a four-minute power play; despite some extended time in the Cleveland zone the Hogs frittered the chance away.

Soon after the penalty expired, a Rockford turnover led to an odd-man rush. The Monsters employed some nice passing to set up Nick Moutrey, who knocked Maletta’s touch pass past Carruth at 15:00 of the middle frame.

Late in the second, Rockford potted its own shorthanded goal when Jeremy Langlois won a corner battle and flipped a shot past Forsberg. That was as close as the Hogs would get, dropping their second game in as many days to the Monsters.

It’s a three-game, three-night weekend for the IceHogs. Rockford wraps up the road trip Friday in Grand Rapids before coming the the BMO Harris Bank Center for Saturday’s match up with Milwaukee. The Hogs then host Cleveland Sunday afternoon.

Follow me @JonFromi for news and updates on the IceHogs all season long. 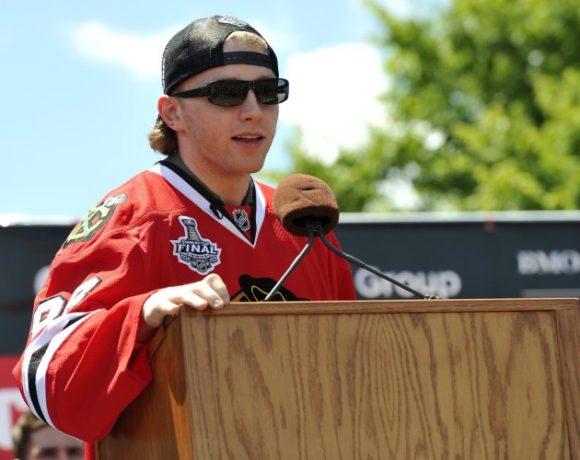