High On The Hog: Three-Play Type Of Weekend 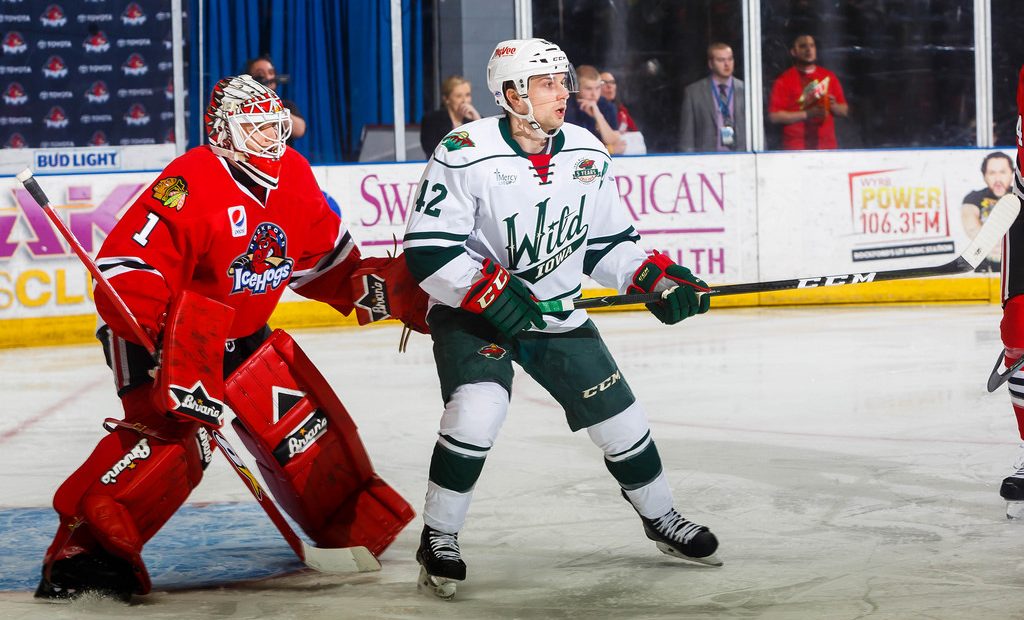 The Rockford IceHogs face their first three-game weekend against some familiar opponents. After opening the season series against the Milwaukee Admirals, the Hogs have a home-and-home with the Iowa Wild. A quick look at the Central Division standings tells us that Rockford is in for a tough start to the month of November.

The Admirals sit atop the division with an 8-1-2 mark. Iowa is third in the Central with a 5-2 record and are scoring nearly five goals a game. The IceHogs (4-3-1-1, .556 points percentage) are currently in a tie for fourth place with Texas and Manitoba. Rockford will have its hands full this weekend.

The IceHogs are a bit banged up and will have to rely on some players a little further down on the depth chart. Rockford is coming off of two losses to Cleveland and Manitoba despite solid play in their own net. The piglets could muster a single goal in each of the last two contests. They will have to improve upon that to keep up in this early-season division test.

On Monday, Kevin Lankinen was sent to the Indy Fuel of the ECHL. Coming up in an unrelated move was forward Brett Welychka, who had four points (2 G, 2 A) in five games for the Fuel this season. Also coming up to Rockford on Wednesday was forward Radovan Bondra. Bondra missed a large chunk of last season to injury after signing an AHL deal with Rockford.

Welychka and Bondra are likely up due to injury issues with Jordan Schroeder and Matthew Highmore. Schroeder may not be ready to return from an injury that kept him out last weekend, while Highmore left Sunday’s game with Manitoba with an apparent shoulder injury.

Defenseman Carl Dahlstrom left Sunday’s game with a groin injury. His availability would seem to also be in doubt, though there should be plenty of healthy bodies for coach Jeremy Colliton to use on the blueline.

Rockford travels to UW-Milwaukee Panther Arena for a 7:00 p.m. puck drop. The Ads won eight of the ten meetings between the two teams last season and are currently on a five-game points streak.

Veteran forward Rocco Grimaldi is up with the Predators, so Milwaukee loses his point-producing abilities. However, the Admirals still have several weapons on offense.

Anthony Richard is tied for the team lead with six goals after potting 19 a season ago. Emil Pettersson (4 G, 5 A) is back for his second season after putting up 46 points in his rookie year.

Defenseman Matt Donovan (6 G, 6 A)is back in the AHL after two seasons in Europe. His six goals is tied for first among league defensemen. Frederic Allard (1 G, 9 A) has also been strong for Milwaukee on the back end.

Longtime Grand Rapids goalie Tom McCollum (2.44 goals against, .913 save percentage) has been the primary starter and will likely face the IceHogs Friday. He is backed up by six-year veteran Troy Grosenick (2.60, .918)

Rockford plays host to the Wild at 6:00 p.m. Saturday before hopping on the bus and taking on Iowa at Wells Fargo Arena Sunday at 5:00 p.m.

The Wild power play is the class of the AHL so far; Iowa has ten goals in 26 opportunities (38.5 percent). At 4.71 goals per contest, Iowa is second only to Springfield in scoring in the league. The Wild come off a sweep of Colorado last weekend, putting up a dozen goals in the two games.

Other point-producers are forwards Justin Kloos (3 G, 3 A) and Kyle Rau (3 G, 3 A), who put up 23 goals with the Wild last season. Landon Ferraro is a familiar name, having skated with Grand Rapids and Chicago as well as Iowa in his seven-year pro career.

Former Hogs forward Mike Liambas will not be afraid to finish a check. He also has three goals already this season. Rookie center Gerry Fitzgerald has four goals for the Wild.

Ryan Murphy is back for his second season with Iowa after five years with Charlotte. He paced the defensemen with three goals and three helpers.