High On The Hog: Trade Bait 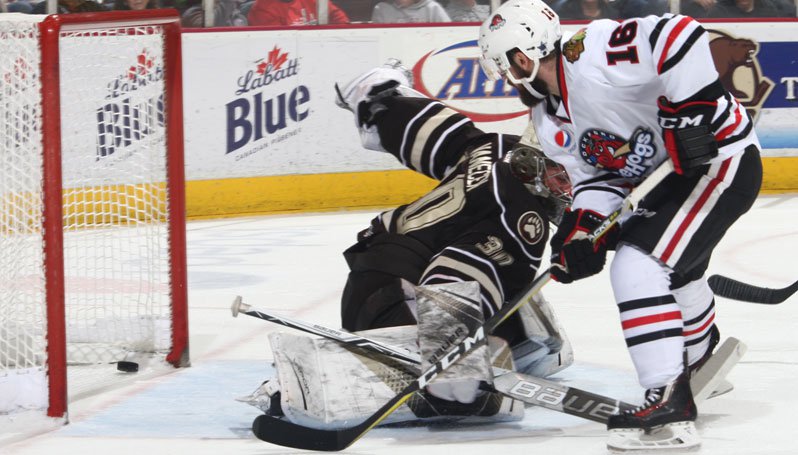 This week’s Rockford IceHogs post is abbreviated. I mean, I could talk about what Blackhawks prospects factored into a weekend split. However, there is a good chance that some of those players will be the property of other organizations.

Due to the uncertainty that is the trade deadline, I’ll hold off on some of this week’s analysis for a day or two. I will sift through any roster shakeup later this week.

Rockford skaters did reach a couple of milestones over the weekend. Matthew Highmore set an AHL franchise record for rookies with his 21st goal in Saturday’s victory in Hershey. Defenseman Adam Clendening also tied a franchise mark, logging his 134th point and 110th helper. Both tie the previous high for IceHogs defensemen with Brian Connelly.

Will Clendening be around to break that tie? Who knows?

Moves will likely be made, either large or small. Viktor Svedberg was a healthy scratch on Saturday and is one of several veteran blueliners who I would not be surprised to see included in a deal. Same goes for Cody Franson and Clendening.

On Wednesday, with new acquisition Chris DiDomenico ready to roll, Rockford sent forward Matheson Iacopelli to the Indy Fuel of the ECHL. As a player with an NHL entry contract, it’s not a common occurrence.

Iacopelli has spent most of his rookie season as a bottom six option. Without a real strong linemate to get him shot opportunities, the former Western Michigan standout still had nine goals in 40 games this season. He’s been a frequent scratch and it’s apparent the coaching staff feels that there is something missing from his game.

Whatever that is, it isn’t his shot. If Iacopelli could secure a role on a scoring line, he has 30-goal potential in the AHL. With this year’s crop of prospects, top-six minutes haven’t been in the cards for him.

Upon arriving in Indy, Iacopelli quickly displayed the kind of offensive punch of which he is capable. He promptly lit the lamp in each of his first two appearances before Saturday night’s hat trick against Quad City.

I’m not sure why Iacopelli has had trouble finding playing time with the IceHogs, but the only thing that can help him fill out his game is steady minutes. I’m positive he’ll get those minutes in Indy for as long as he’s there.

Rockford’s road trip began in not-so-impressive fashion, falling behind early to the Penguins and never getting back into contention.

Wilkes-Barre/Scranton took a 2-0 advantage in the first 8:04 of the contest before the IceHogs could get on the board. Tyler Sikura slipped in front of the net to tip in a John Hayden offering at 10:22 of the first period to cut the Penguins lead to 2-1. However, a late Penguins goal put them up 3-1 at the first intermission.

Over the next 30 minutes of action, Wilkes-Barre/Scranton got three more pucks by Hogs goalie Jeff Glass, taking a 6-1 lead midway through the final frame. At that point, Rockford managed to gain a measure of respectability with a couple of garbage-time goals.

The IceHogs power play got rubber to twine when new addition Chris DiDomenico got a piece of Viktor Svedberg’s slap-shot at the 13:40 mark. A few minutes later, DiDomenico got to a puck in the corner of the Penguins zone. His pass found Anthony Louis near the right post for the score at 16:19.

The ending was not without controversy, but the Hogs were able to pull out a win in what was a pretty unusual affair with the Bears.

Despite a landslide advantage in shots on goal, this game was nip-and-tuck in terms of score. Rockford was able to gain the first goal of the contest while killing a delay of game penalty.

John Hayden proved to be the catalyst on a shorthanded chance, creating a turnover along the half boards and getting a shot on net that was knocked aside by Hershey goalie Vitek Vanacek. Matthew Highmore was at the left post to collect the rebound, setting a Hogs rookie record for goals with his 21st of the season. Rockford led 1-0 at the 12:35 mark.

The Bears answered in the second period when Liam O’Brien laid a big hit on Alexandre Fortin to separate him from the puck. The big winger worked a give-and-go with Zach Sill before firing past Hogs goalie Collin Delia to tie the game 1-1 at the 13:25 mark.

Rockford’s power play made it a 2-1 game late in the period. Adam Clendening sent a stretch pass to William Pelletier, who got across the Bears blueline ahead of the defense. Pelletier skated to the net before getting a backhander past Vanecek at 17:46 of the second.

Hershey rallied again, drawing even on Travis Boyd’s power-play goal 6:35 into the third period. The IceHogs regained the lead 70 seconds later when Pelletier tipped in a Chris DiDomenico shot for his second of the night.

The Bears, for the third time of the evening, were able to come up with the equalizer, again while on the power play. Riley Barber took advantage of an open look from the right circle to tie the game on what was just Hershey’s 14th shot of the game. Rockford had 38 shots, by contrast, but the scoreboard showed three goals for each club. That’s how things ended in regulation.

Gus Macker Time ended 1:46 into the proceedings. What could easily have been a penalty on DiDomenico after getting tangled up with Barber wound up an odd-man rush the other way. Hayden brought the puck into the Hershey zone and fired past Vanecek to notch the game-winner.

Most nights, stopping just 11 of 14 shots wouldn’t be good enough for a win. On this night, it was as Delia picked up his ninth win of the season. Hayden and Pelletier were named the first and second stars of the game, respectively.

Rockford has a Wednesday night skate with the Texas Stars at the BMO, visit Milwaukee on Friday, then hosts the Penguins of Wilkes-Barre/Scranton Saturday night.

Follow me @JonFromi on twitter to get some nuggets of thought on Rockford doings all season long. 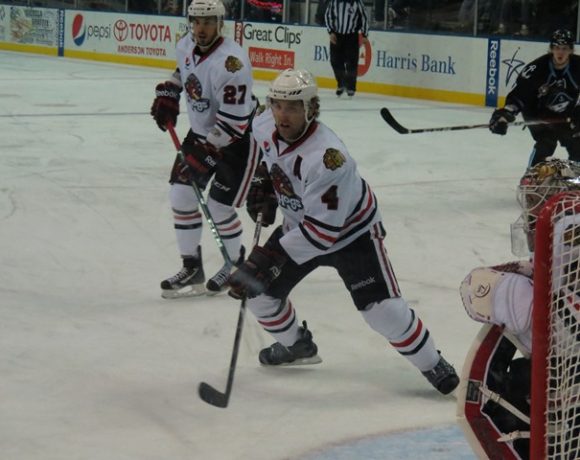 Pigs in Zen: The Twists and Turns of a Playoff Push

The Sound Of Science: Blues At Hawks – Preview/Pre-Game Thread/Flea Circus 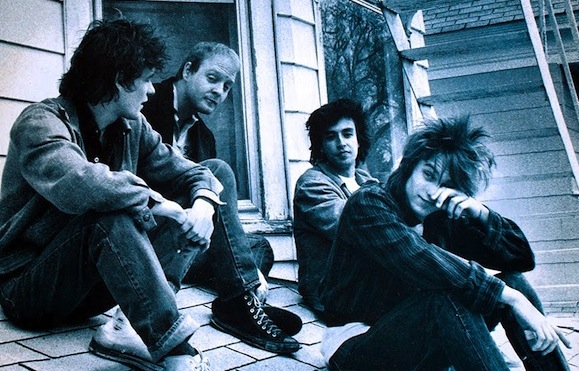