How Does Andrew Luck Retiring Affect The Leafs? 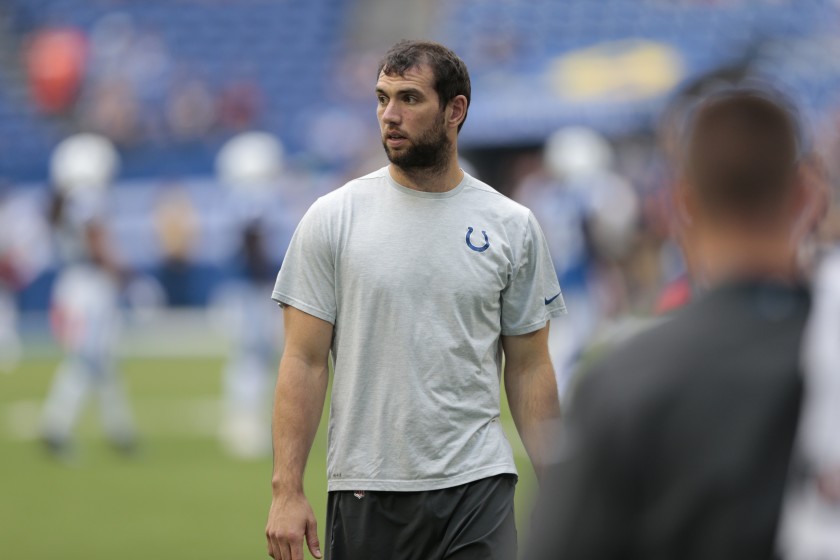 Ok, not really, but it was a fun joke to make.

There is a great fear in football, which was there before Andrew Luck retired but is now only exacerbated, about a shrinking player pool. And that’s at every level. As you probably already know, the level of participation at the youth level has been dropping for years, as more and more parents have decided slowly killing their children is less than ideal. And at the top level, more and more players are retiring at younger and younger ages because they’ve made their money, don’t feel the need to ruin their later years, and can still get out with everything mostly intact or as close to it as they’ll ever be.

The other sport with concussion issues, or at least a lawsuit because of it (baseball probably has one too at least behind the plate) hasn’t had this rash yet. We haven’t seen a lot of players retiring early when in the peak of their careers unless there was no other choice. Nathan Horton didn’t have a choice. David Clarkson had piled up so many injuries he didn’t have a choice. There are other names who simply could not even consider playing again. But they’re a far bigger rarity than what we’re seeing in the NFL.

But with Andrew Luck being the biggest name to decide it wasn’t worth it (rightly) anymore, is this something the NHL will have to fear in the near future? I tend to doubt it.

One, and the big one that both sides of the brain-injury debate in football tend to miss, is the very nature of football is destructive to the brain. It’s not the blow ’em-up, wince-on-your-couch hits that are the problem, or THE problem. The arbiters of the game think it is, a lot of fans on both sides think it is, but it’s not the major issue. It’s the contact on every play. It’s the simple blocking and tackling, the sub-concussive contact that adds up over a game, season, career that does most of the damage. And you can’t measure that damage on the brain until it’s too late. It’s also that contact that leads to a ton of other injuries, the type that Luck decided he’d had enough of. Football is just a dull ache at best all the time, disastrous on the body at its worst.

Hockey doesn’t have that. It has contact all over the ice of course, but nothing like football. There are probably entire shifts players can go through without contact (cue Don Cherry losing his mind about Europeans here). Hockey’s injuries come from the big hits, and those are the ones that the rules-makers are ham-handedly trying to fix. You could actually get these completely out of the game if you weren’t so terrified about an old white man with a nose the size of Idaho and as red as Mississippi losing his goddamn mud over it. That’s another debate, but the rate of major injury in hockey just isn’t the same.

Second, hockey players just don’t have the safety net that Luck does.

We joke about hockey players being dumber than donkey shit all the time, but this does enter into it. Luck has a Stanford education, and while there are hockey players from Harvard, Yale, Michigan (it’s a seriously good school I’m not being biased here), Brown, Cornell, BC, BU, and a few others, the ones who stay all four years and graduate tend to be fringe NHL-ers anyway. Your major stars in the NHL are in college maybe a year, some don’t even go, and a ton aren’t in school past like seventh grade in reality. The only thing they can do is hockey. They’d be lost without it.

While a lot of football players don’t do much on campus (and actually we’d be much better off if too large a number only did nothing instead of bad), they have to be there three years. A good portion of them do get somewhat close to a degree if they want, and a good portion go back and get it even while playing, no matter how much of a star. Their options are a little more varied.

Magary covered this yesterday, but one thing hockey and football probably do have in common is searching out players whose life is only the sport they play. This is much easier for hockey scouts, and probably getting more and more difficult for football scouts and GMs. But you’ve seen what hockey minds think of any player who shows any personality or outside interests. Hell, we made fun of Jonathan Toews’s and his interest in green science, because it was fun to do so while also happy that he actually did have an outside interest. But do you think there were some in the Hawks front office who worried his new passions led to his dip in production? You better believe there were.

Unlike football, hockey has the ability to change the things that make it destructive. And at times, it feels like they want to but don’t know how. But it’s not as urgent as football, which is probably why they’ll stick with half-measures for the meantime.

High On The Hog: Four-Point Week