The Hawks come out of the Christmas break, a day after most teams, with a pretty soft landing in catching the Carolina Hurricanes on the second of a back-to-back. They’ll be fully healthy as well, with Marian Hossa coming back from the auto-body shop to buff the dents out of his cyborg exterior and will suit up tonight.

What they’ll see on the other side is a pretty confusing outfit. It’s clear that coach Bill Peters, who is out of both the Hawks’ and Wings’ organizations, knows what he’s doing. The Canes are one of the best possession teams in the league, just as they were last year. Clearly Peters believes in the puck possession ways that he was involved in with the Hawks and Wings. But they’ve been undone by horrible goaltending, which Cam Ward has specialized in now for a few years and yet he keeps ending up as the starter as the Hurricanes have been unable to to locate a usurper. They thought it was going to be Eddie Lack, whom they gave up a couple 3rd rounders for in the summer, but he hasn’t been able to stop a geriatric in the sand this year with a .876 SV%. Ward started last night at home so  Lack gets thrown out there tonight.

The strength of the Canes is clearly on the blue line. Justin Faulk leads the world in power play goals with 12, and is probably the best d-man no one’s ever heard of in the league. Rookies Noah Hanifin and Brett Pesce who have both played well above their heads so far this season, and Hanfin in particular looks to be a foundation block. John-Michael Liles, who we’ve been highlighting pretty much all season, and Ron Hainsey round out a very solid unit that has no problems pushing the play and getting involved offensively, one of the main reasons the Canes do all right possession-wise.

Up front, the Canes are a little short. Eric Staal is about to begin his trade deadline odyssey, and no longer plays center but instead is on Victor Rask’s left wing. Elias Lindholm centers Jeff Skinner on the 2nd line, and Skinner is on something of a binge with a couple hat tricks in the past couple weeks. Skinner actually generates the second most high danger chances in the league behind Taylor Hall, whatever his defensive frailites might be. Jordan Staal… does Jordan Staal things. But still, Staal The Eric Version is probably the only definitive top liner they have, and even that these days is becoming questionable. Put it this way, GODDAMMIT VERSTEEG is on the top line.

While the Hurricanes have enough speed up front, at home the Hawks should be able to shield Statler and Waldorf and get them out against whatever is running around the Canes’ bottom six these days. Eddie Lack is almost certainly not going to perform any miracles to shut out the Hawks or keep them to a low number either, and the Canes just don’t have the firepower to keep up with even a limited Hawks’ effort. Unless the Hawks go well out of their way to keep the opponent in the game, this should be a nice boost before a short road trip to close out 2015 and the schedule ramping up a bit in January. Of course, teams in the past have had trouble getting the legs going after the Christmas break, but even that shouldn’t make this too tricky.

If you’re heading to tonight’s game, pick up a copy of our game program sold outside the UC. If you’re not, you can get the digital version right here. 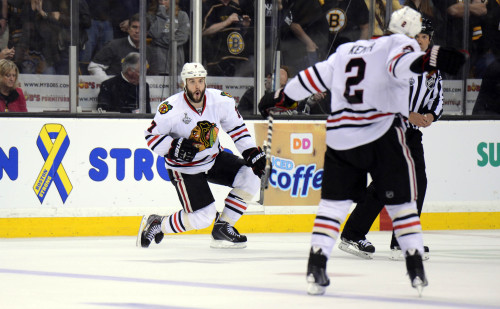