I Guess You Have To Have A Problem If You Want To Invent A Contraption: Hawks 1 – Scum 3 (Scum lead 2-1) 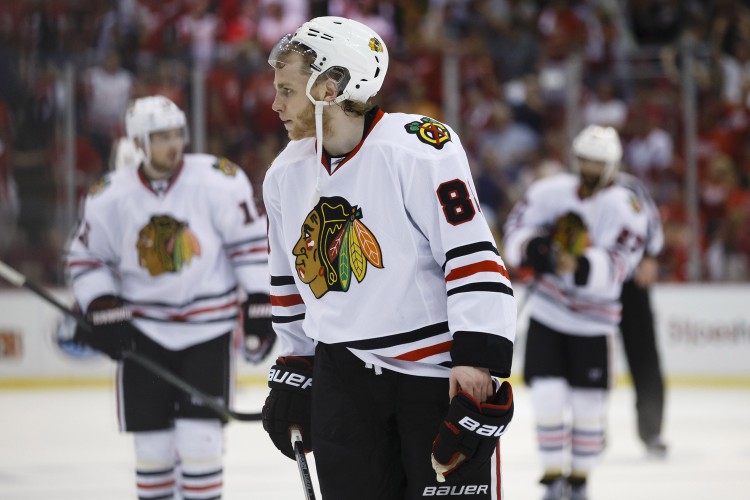 Let’s get some things out of the way first, because they probably need to be addressed. It’s not over. It’s not fucked. Quite simply, and maybe it’s just my opinion, but the Hawks are where or very close to where they need to be. There will be a lot of panic these next two days, they will be Chinese water torture, but if you can find a reasonable Wings fan they will tell you that nothing is cinched up here.

Will Thursday be fun? Oh god no. By the time puck drop hits you’ll be in cold sweats and Johnny Walker Blue won’t even get you out of it. Will you sleep between now and then? No, probably not. But we’ve been here before. I thought it was over down 2-1 to the Preds in 2010. They answered. They’ll answer again. Not even that much has to change.

-There’s one talking point from this game, or I guess it’s two. If I were a Detroit fan, I would think it’s a crime that Hjalmarsson didn’t get a penalty for that hit on Franzen. From here, I think it really could go either way. At some point, merely turning toward the boards doesn’t make you George-Bluth-No-Touching. When Franzen turned Hammer was no more than a foot or two from him. There’s no time to beg off. This is where someone will say that there’s some responsibility on the puck-carrier to protect himself. I’m probably in that category, but I get the other one. If Franzen had been facing the boards for a full second or more, then it’s obviously a penalty. I know this one will rage forever.

-Call me biased again, but the no-goal call changed everything. Shaw never made contact with Howard, and worse yet Howard made the initial save. Along with making delay of game calls reviewable, I feel like this one has to be too. You could argue they cancel out, I can see that. But it sure doesn’t feel like it. On another night, the Hawks are tied with plenty to go and momentum boogers pouring out of their nose. Where does it go then?

-Already I see people on Twitter on other places lighting up Toews, and I guess we started that campaign. But I don’t see how you complain about his game tonight. 7 shots, +14 in CORSI. And the post to boot. Sure, he didn’t win half his draws, but if he does this again on Thursday, it’ll end in two goals.

-Can’t go any farther without praising the Wings bottom six, who outplayed the Hawks bottom six. That’s the tangible difference right there.

-After the killer no-goal, I don’t know what you do about Datsyuk’s shot. I could stand five feet from the net and not be able to throw it into the spot he found.

-But it’s not all sunshine. There’s simply no way Brent Seabrook can let Nyquist get to the middle. Keep him out there on his backhand, where’s he gonna go? Flying out just outside the faceoff dot gives him the opportunity. It’s obvious that Q has already spotted that Seabrook is just not going to recover from his regular season case of swamp ass, as his pairing is getting the least amount of minutes. Shame, because Leddy is doing just about everything he can.

What do you do? Scratching him just seems to be a nuclear  option. How would that work? Leddy covering for Brookbank’s lack of mobility, assuredly to be exacerbated by the fact he hasn’t played in a month? Go with just five D in Tortorella fashion? That doesn’t make me feel better.

What’s even worse about Seabrook’s game under his defensive idiocy is that he went from the best passer on the Hawks blue line to unable to find the same zip code as a teammate. That’s so crucial to the Hawks game. Now it’s just either given-up possession or an icing.

-And that’s a problem due to the Hawks problems on faceoffs. That’s not something we didn’t see coming. Strangely, Handzus won a majority of his draws tonight. Didn’t feel like that though. There’s just not many cards to play here. It also feels like the Hawks got beat on a lot of 50-50 pucks more than just losing draws clean. They can move Sharp in to take more draws. They could dress Mayers to take draws and then leave the ice. But draws were a problem all year. It didn’t really matter. I just don’t know that it should matter so much now.

-Q is going to have to get a leash on Andrew Shaw. He can’t be scratched, at least I think that’s what they think. But the Hawks cannot live with his indiscipline either on the puck or behaviorally. It will cost them again.

-I think it’s a false indicator that Rozsival’s turnover led to the second goal, because he unlike Keith and Hammer and Seabrook he was exhibiting the patience to find a teammate out of the zone instead of just flinging it. But are we really going to complain about when the supposed #6 d-man fucks up?

-The Hawks need to fight a little harder to get to the rebounds that Jimmy Howard is leaving around.

-Ok, the power play. An issue now. The idea that Duncan Keith can QB the 1st unit is ridiculous. His decisions are something you’d pick up with a shopping bag inside-out so your neighbors didn’t complain. Go balls out and put Leddy with the four forwards. The entries are just so much cleaner that way. If Seabrook can regain consciousness any time soon, he can be considered.

I know a lot want to start throwing shit. But the Hawks did a lot of what they needed to do tonight. They got the puck deep. They hassled the Wings D. They closed off the middle of their ice. They carried the play for most of the game. (Oh yeah….THEY TIED THE FUCKING GAME).

They hit three posts. They won’t do that again. They got a pretty bad call. That’s likely to not happen again. They attempted 66 shots to the Wings 48. The Wings will still toss out Quincey, Smith, and Colaiacovo. They can go ahead and do that. After time, I’m pretty sure I know how that works out.

Yes, the challenge has been laid down. An answer is needed. They can’t miss now. But the answer is coming. They’re coming. Nothing is fucked. 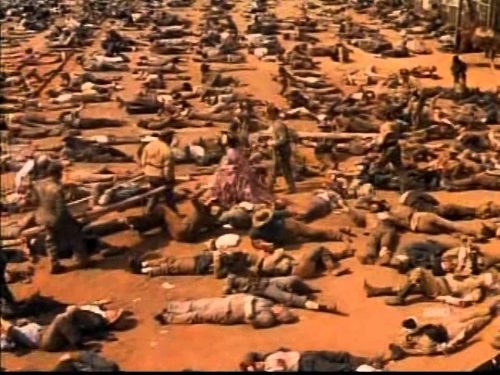