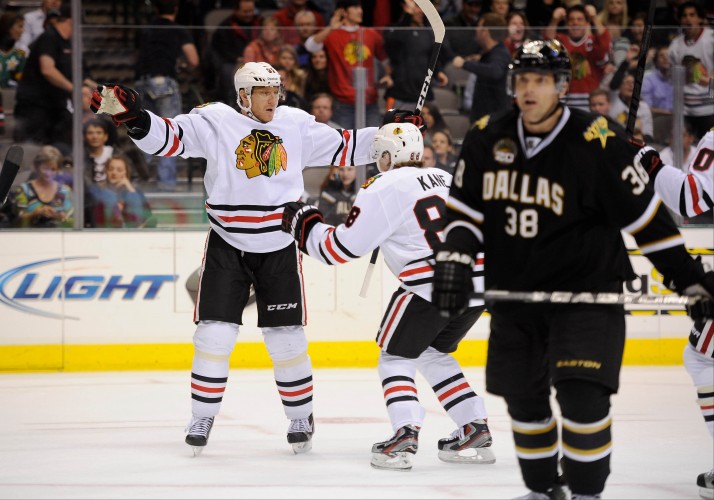 The Hawks special teams save the day. I’ll now take a break while you try and shake the cobwebs from the embolism you’ll have had reading that.

Ok, now we go. The Hawks weren’t great for the first half of the game, and what moments they did conjure were stopped, dropped, and rolled by an inspired Kari Lehtonen (no doubt motivated by McClure’s reminder in the preview that he usually steals one from the Hawks once per season. I’m contagious, apparently). And while they improved in the last 30 to claw back a two-goal deficit, it was their power play that got them there. Along with two important and pretty dominant kills. Isn’t that a welcome change?

-I’m not going to say the Hawks were bad in the first 30, but they were doing something they hadn’t done much in the first three games and perturbs me greatly, and that’s a  dependency on the stretch-pass. Wingers were not cycling back to their zone, and once again that annoying tendency to fire a puck to a stationary winger at the other blue line. All he can do is chip it in from there and pray that the other winger is hitting the line with speed when he does. Thanks to what is basically an inept Dallas defense, it was more effective than it should have been. But after the first 10 minutes and until about 10 minutes left in the 2nd, this all the Hawks were resorting to. When they made an effort to break as a team and keep the passes to no more than 15 feet….well, you saw the results.

-Case in point was Dallas’s second goal. While an egregious turnover by Rozsival, both Sharp and Kane made a beeline for the Stars line, with Rozsival skating backwards. He only had a covered Bolland in the middle and Leddy on the other side which was too risky. There was only one alley he could take, and it was easily blocked. This is something they didn’t do again after.

-Ok, good stuff. The power play. It’s got movement, it’s got some imagination, and if you keep giving the Hawks superior talent space, they’ll get lucky and they’ll find a way through. Or did the Stars think that Marian Hossa was just going to keep missing all these chances?

-Hey, did it look like Jaromir Jagr couldn’t be bothered? Yeah, Stars fans should get used to that. That motherfucker is basically Alex Kovalev with better hair and more of a rep.

-Brent Seabrook didn’t have his best effort, and he’s looked rusty all season. This was eminently predictable after I called him the Hawks best d-man. Nor do I expect it to continue.

-But it hasn’t mattered as much, as both Hjalmarsson and Nick Leddy had strong games. Leddy had one or two wobbles in his own zone, but I’ll live with those if he continues to push it the other way. The Hawks are a much different team with another guy who can do that besides Keith. Hammer has really had a good gap all year, which has caused his stick to be much more active. He hasn’t had to turn himself into a backstop because he’s in better position to stop the shot before it ever happens. Looks like a guy who’s not afraid to get burned, and when you play fearless you tend to not get burned. Much different than the timid Hammer we saw last year.

-We get it, Lehtonen’s left pad works. Stop trying it.

-I kind of remain in a state of bewilderment that there are people who think Brandon Saad looks out of place. I understand the points might not be there, but isn’t he already one of the Hawks best forecheckers? He’s keeping and stealing possession which is allowing Toews and Hossa to go all Galactus on teams. In fact, Saad should be replacing Shaw on the power play in 3….2….1….

-They didn’t have any points, but I thought Stalberg and Bickell also had strong games. A mere flipping of Shaw and Kruger would see them get a true center and might make that line pop more than it already is.

-In case you can’t tell, I’m not exactly enthralled with Shaw’s frantic, energetic yet brainless game at the moment.

-Very small sample size on Crawford. Eriksson’s goal was unfortunate in that he stopped the shot but had it bounce funny through him, and he got lucky with Keith backing him up. But he stopped a penalty shot, made a couple big saves in the 3rd after getting to read most of the Dallas Morning News, check out the AAC signage, and maybe send his room number to a Texas honey or two on the glass due to inaction. Isn’t that all the Hawks are asking of their goalies?

-I get annoyed when Sharp is on the point and all he does is crash to the goal line. Because he’s capable of so much more there. His big shot keeps penalty killers occupied, which opens up passing lanes which he can exploit. Oh look, there’s Toews’s goal.

-The Hawks attempted 77 shots. The Stars 42. That’s what we call the cliff-notes of the game.

Four is better than three. While this is getting out over the skiis, if the Hawks can get both this weekend, they won’t have to ace the Ice Show trip to be in good position when they get seven straight at home. Winning three in four nights in three cities is never easy….except they’ve already done it once this season. 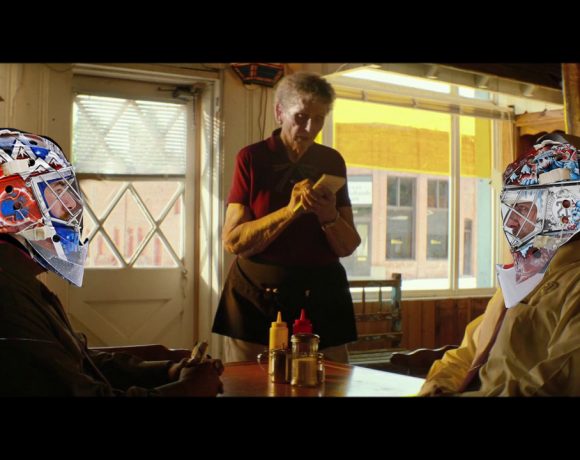 Game #62 – Avalanche vs. Hawks Spotlight: So What Don’t You Want?