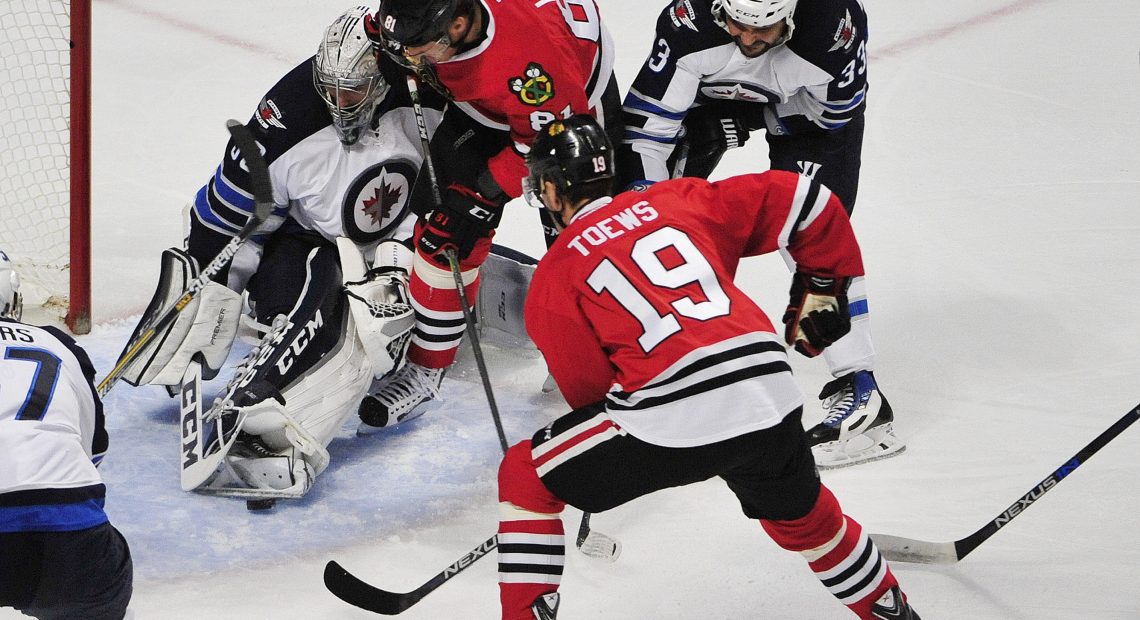 Coming off their worst performance of the year in Nashville, the Blackhawks for two periods showed what it looks like when they give a crap about a game during the slog of the regular season. The Hawks were efficient in their breakouts, were drawing penalties because they always had the puck and had complete control of the game.

The only way the Jets were going to draw a point was if they were able to get pucks past Corey Crawford in the third when score effects took over. With the way Crawford has been playing, that’s a pretty tall task.

So the Hawks took two whole points from a divisional opponent and in the short term, took 4 out of 6 in their last three games. Which is pretty good, I think.

–Before the game, Joel Quenneville promised tweaks to the lineup and you got…Mashinter in for Garbutt. Yay? Another slight adjustment was that Hjalmarsson was partnered with Brent Seabrook and TVR spent the majority of the game with Duncan Keith. Though there were still spots where the partners got jumbled.

48 games in the Trevor Van Riemsdyk experience, it’s getting a little more difficult to see how the Hawks remain much more patient with him. Tonight, he had a couple mishaps (falling with the puck inside the blue line in the first period sticks out as his biggest gaffe) which led to primo scoring chances for the Jets.

I don’t know what the magic number of games played is but the Hawks did let Nick Leddy play on the top 4 pairing for quite some time before ultimately relegating him to bottom pairing status. So I suppose this just needs more time to develop before a decision is made.

–I can’t believe I’m saying this but the Hawks second power play unit with David Rundblad and Teuvo Teravainen on the point are actually positioned correctly, in terms of proper shooting side. Rundblad is in the middle of the point with Teravainen on the right circle. Lo and behold, the Hawks are actually getting one-timers off on the power play through traffic. Be still my heart.

–Speaking of Finnish Baby Jesus, he was impressive once again. On the first goal, his cross ice saucer pass through traffic to Rundblad started the scoring play. It was also a nice reception by Rundblad as he kicked the puck to his stick before unleashing his shot.

The second goal, I don’t know how many other people on the planet could have made that pass. Not only did he slide the puck through about three people, he also didn’t give away his intentions until the puck was leaving his stick. On the replay, you could see Teravainen’s eyes looking like he was going to shoot the puck towards the net and then at the last second, he’s sliding a cross ice pass to Kane.

And Kane’s shot wasn’t exactly easy, either. He put the puck in a spot few else can. Just an unbelievable play all around.

The Kane goal also extended his point streak to 25 games. Much has already been written in this space about that so I won’t repeat what’s already been said.

Yes, this streak is really impressive but let’s be serious, no one is touching Gretzky’s mark and the fact that reporters are reaching out to him to ask his thoughts is on the streak is pretty hilarious.

The other thing I can’t help but notice is that I feel like this streak has taken on a life of its own and starting to remind me of the circus that used to be Sammy Sosa’s Cubs. What I mean by that is it seems like the first question people are asking these days is “Did Kane score?” and then following that up with “Did the Hawks win?” Which is essentially implying that Kane’s personal stats are more important than any team success.

–Trevor Daley only played 8 minutes. But I’m sure that concussion from less than a week ago is all healed and ready to go.

–Artemi Panarin’s defensive game is far better than advertised. There have been several instances this season where he’s not even in the picture on the backcheck only to come out of nowhere and lift a player’s stick or knock someone off the puck. In addition to their scoring and puck possession prowess, you have to think this is also one of the main reasons why Quenneville hasn’t touched this line since opening day.

–While admittedly very early, the full two points against Winnipeg was quite large as this now puts the Hawks 6 points ahead of them with the same amount of games played. Winnipeg is currently sitting in “9th” place of the West. As long as the Hawks keep adding to that cushion, the rest (positioning, home ice, etc.) doesn’t really matter as much.