In Touch With Some Reality Beyond The Gilded Cage: Hawks 1 – Leafs 1 (Hawks win Stickball) 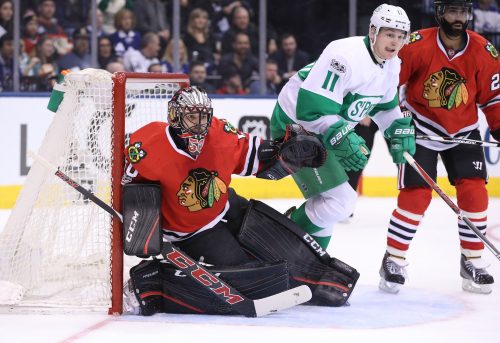 The Hawks tried something new tonight. After getting decked on the shot-board the past three games and asking Crawford and Darling to go Barnum and Bailey to get them two points, they methodically controlled the Leafs, who of the past four opponents contained the most high-end finish and thus could have made the Hawks pay for their wayward ways. Although this time the Hawks were trailing early, and thus had to chase a bit until Hayden equalized.

A third period that saw both teams go for it early and then look at each other and say, “You good with overtime?”, gave way to an exciting if not artificial OT where Hartmania ran wild on the Leafs, faking out Andersen from the circle to beat him to the stick side. And with that, the Hawks are now five points up in the division, thanks to their best March under Joel Quenneville.

-As pointed out by McClure on Twitter, just because Mike Babcock is out of Detroit doesn’t mean he didn’t bring some Detroit with him. He must tell his teams that if you constantly hold, screen, and interfere the refs are simply going to toss their hands in the air and let it all go. No wonder they find so much open space.

-Duncan Keith and Niklas Hjalmarsson dominate possession, to the tune of 60% Corsi. The Hawks give up one goal and win. I start the fire but I miss the firefight…

-With last change, Babcock kept Matthews away from the Hawks’ top pairing, instead sending out that line against Seabrook and Oduya for the most part. Though this matchup did result in the one goal against, they held their own pretty well the rest of the time. The one thing the pairing lacks is any dash with its feet, Oduya just isn’t that gifted, but that can occasionally be made up for with Seabrook’s passing, i.e. the goal tonight. It’s whether Seabrook can do that enough that’s always the question.

-Speaking of which, though Hayden has only shown a flash or two when on the puck and looks a little behind everything the rest of the time, that was a scorer’s instinct to rip the shot off first time off his skate. Had he tried to corral it, Andersen would have been set and not surprised. So I’ll give him that.

-Hartman and Jurco were probably the best forwards on the night for the Hawks, and while TOOTBLAN has actually not swallowed his own vomit for a couple games I’d much rather give Jurco the rest of the slate to see if anything can’t be conjured. He’s got some skill and vision, and I don’t know where it says you can have too much of that. I certainly don’t need to see that much of the good Dr. or TOOTBLAN or Desjardins.

-While Panarin set up the winner, he had another game where he basically spends his time twiddling his thumbs and waiting for a one-timer. It’s not a major alert for now, because based on last year he will actually apply himself in the playoffs. It’s just annoying, and Schmaltz could use the help.

-If this Leafs team ever gets a genuine #1 pairing d-man then there’s really nothing stopping them. I just don’t know where that’s going to come from, and trading for one would have a running in place kind of feel. Their forward depth is what sets them apart. I’m just going to start the Karlsson-to-T.O. as a UFA in two years rumors and watch Ontario burn.

-The Hawks won 31% of the faceoffs. They won anyway. Because faceoffs kinda don’t matter.

-The Wild have caught the Hawks’ usual March doldrums. By the end of the week the division could be wrapped up. Hey that’s all right. 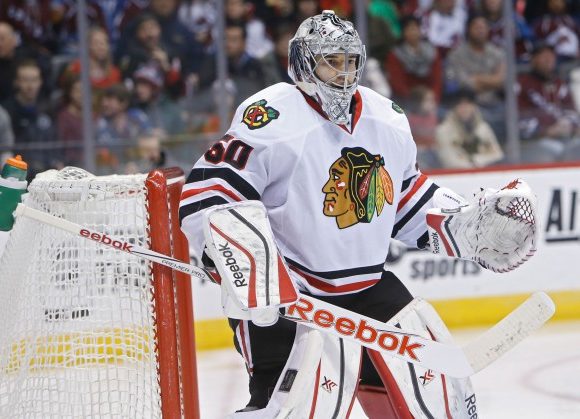