It’s become somewhat of an annual occurrence over the last 5 or so seasons, where the first meeting of the year between the Blackhawksand Sharks, normally around this time in November, is viewed as a barometer of one another’s success and potential in advancing through the Western Conference. Both have been conference Finalists at least twice in that time, and based on the early returns this season, there’s no reason why it couldn’t happen again for either squad.

For the visiting Sharks (feel free to skip ahead from this point if this all sounds very familiar), things have cooled a bit since starting the season ablaze in October. Though the Sharks have now won three straight against Western Canada, prior to that was a five game winless streak, in which the Sharks still managed a point in four of them, even if they probably got jobbed by poor officiating with Buffalo in town. They’ve done in primarily through offense, as the Teal boast four players with 20+ points (Thornton, Pavelski, Coutoure, Marleau), and early Calder favorite Tomas Hertl with 18 and leading the team in goals with 12. The Sharks win a lot of draws, with Thornton, Pavelski, and Couture all well over 50%, and they drive a ton of possession from the center position. As a compliment they also boast some cannonball wingers in the form of rat-faced Tyler Kennedy and LOCAL BOY Tommy Wingels, who’s having something of a breakout season.

That solid forward group is doing everything it can to mask what can be described as a mediocre defensive group. Dan Boyle has come back from the horrific hit Max Lapierre adminstered to him, and appears no worse for wear in the offensive zone. But that’s been Boyle’s issue in his post TB days, is that he’s really only effective facing one direction. Marc-Eduard Vlasic and Justin Braun now form the de-facto top pair, each seeing over 20 minutes a night. But the Sharks are still counting on well over 18 minutes a night from Brad Stuart and Scott Hannan because apparently Todd McClellan doesn’t realize it’s not 2003.

Behind all of this is old friend Antti Niemi, who’s having another solid year with a 2.13 GAA and .918 save percentage, even if they aren’t the Vezina caliber numbers he put up last year. Niemi only faces 25.7 shots a game, which is a function of his forwards always having the puck. Certainly everyone knows the book on him by know with his stabby glove hand, but the key is to have the puck long enough to be able to pick that shot.

As for our Men of Four Feathers, there’ll be no time to wallow after last night’s embarrassment in Music City. There’s still no word on whether Marian Hossa will play tonight, but given that the news of the day only involved a promotion of Antti Raanta to back up Crawford after Khabibulin’s crotch exploded last night, it stands to reason that either Hossa’s going tonight, or Sheldon Brookbank will once again get 6 shifts at forward.

The keys for the Hawks tonight will need to be puck support on faceoffs, as well as pursuit of the Shark defensemen, as none are wizards with the puck or can skate themselves completely out of trouble. Forcing them into quicker decisions than they’d like is the best way to keep the puck away from their forwards. Additionally, taking advantage of their lack of speed as a unit with soft chips to the outside on zone entry should buy the Hawk forwards the time they need to set up for quality shots on Niemi, and not just hurl them at his chest like last night. Furthermore, staying out of the penalty box is even more important tonight than usual, because even if the Hawk PK wasn’t awful, the Sharks’ power play could still make it look stupid with how well they move the puck.

In the early going of this season, the Hawks have only walked away with 1 point out of four in two games against the Blues, the only other Western Conference heavyweight they’ve faced to date. If they’re going to be able to actually win within this meat grinder of a conference and not just rack up points against garbage out East, tonight would go a long way in showing they can do so. Time to batten down the hatches. Let’s go Hawks. 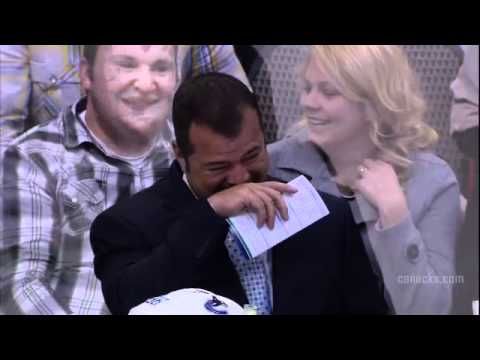 Game #39 – Hawks vs Rangers: Spotlight – Alain Vigneault Is In The Wrong Sport

We Like To Watch – May 16th: The Good Fortune Of Mistakes Not Made