FACEOFF: 2pm Central
TV/RADIO: CSN, WGN Radio 720
DON’T TELL ME NO LIES AND KEEP YOUR HANDS TO YOURSELF: On The Forecheck

These used to be a regular thing in an NHL schedule. I remember a time when it felt like the Hawks and Leafs played about 15 weekend back-to-backs against each other per season, with the Saturday in Toronto and the return back on Madison. They seem to have gone away now, which is a shame. Maybe with the division schedule next year, they’ll return a little. We shall see.

If there was a divisional opponent you’d pick to play a back-to-back against right now, the Preds would probably just edge out the Wings for that honor. After sneaking out of the UC with a point on Monday, they beat Colorado at home the next night, but dumped it to Columbus on Thursday night. That came a day after Martin Erat — annoying to us abut an alternate captain and franchise stand-by for years to them — out of nowhere was traded to the Caps. We came to learn that Erat had asked out, which is a little more shaking to the organization than you might think. After all, this was a player brought through the system, a top six winger for years, and while it it horribly ugly it was a face of the franchise. Guess we know what Erat thought of the Preds playoff push, eh?

Obviously, not much has changed in only six days since these teams last met. The Preds can’t score, can’t generate much, and beyond the first pairing of Weber and Josi, their defense can be exposed. Pekka Rinne has to be superb just to give the Preds a chance most nights. But that doesn’t mean you can sleep on them, because you know they’ll work hard and if you aren’t attentive they’ll force those turnovers in the offensive zone they need to get chances. They won’t do it on their own.

For the Hawks, Dave Bolland and Patrick Sharp did not make the trip. You begin to wonder if there’s something more with Sharp’s injury than anyone is telling us, as he’s been seemingly close to a return for a while now without actually making it to the starting gate. As for Bolland, who knows if this is a result of that blocked shot in the last game against the Preds, or if it stems from an earlier injury this year. Either way, we’d all better hope that’s the main reason he’s been a sucking force that light cannot escape from this season.

According to the tweets today, it means Marcus Kruger will slide up to center for Kane, a position we’d really like him to get comfortable at for when Sharp does eventually return.

Otherwise, everything looks just about the same. Ray Emery will get the start, where he will assuredly give up one goal or less to send Hawk Nation into a frothy frenzy over a goalie controversy and McClure and I move full-time into a bomb shelter we’ve had constructed for just such on occasion.

If you’re wondering what to do for the game, you should go join Kills at Sheffield’s. He’s got all sorts of Two Brothers specials for you there, and they have some pretty killer BBQ for you to munch on. I unfortunately cannot attend due to Indian and Ivy Drip duties, but Kills is far more charming and better looking than any of us anyway. Enjoy. 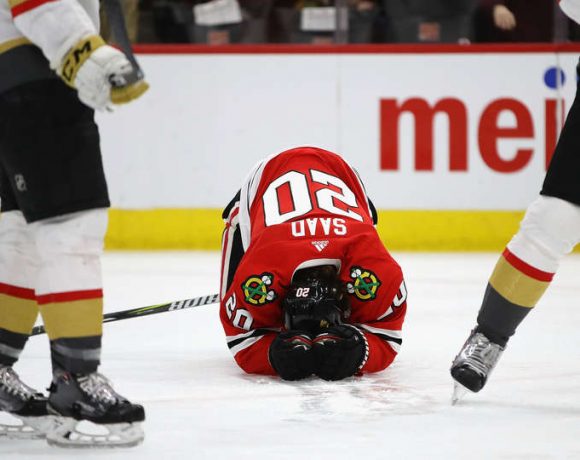