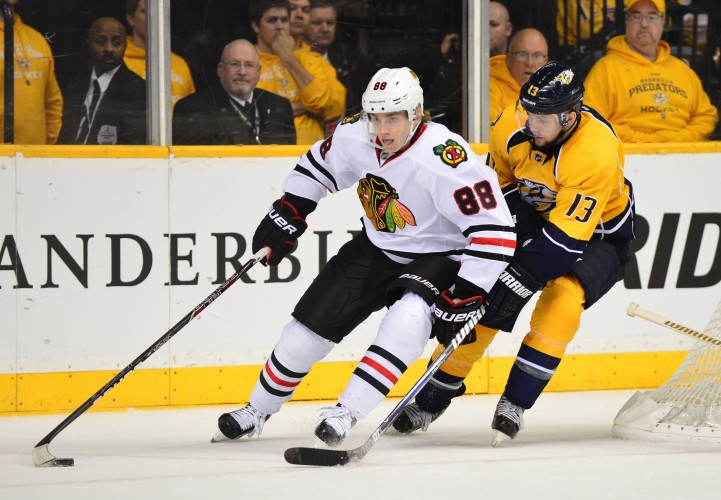 God, there need to be more Get Shorty references on this blog. That’s my fault.

First off. A shutout!

Now that’s out of the way….

12 games isn’t a sample size, and it’s impossible to know how topsy-turvy things will get in this season-in-a-can. But it’s not the blowouts or OT wins or other things that make you believe the Hawks could go deep into the spring as much as the efficient, barely out of third gear, completely controlled strolls like tonight.

Even after a scoreless 1st period, it already felt like the Hawks were never going to be in danger in this one. All it took was barely a minute and a half of ruthlessness,  and the Hawks were way out of sight of what was admittedly a legless Predators side.

But we know how hard the Hawks made games against Nashville for years, so it was refreshing (to say the least) to see them take full advantage of Nashville’s even-strength putridness for once — combined with the fatigue. They got pucks deep when they needed to and won all the races. But more importantly, especially Leddy and Hjalmarsson, there was no puck catapulting to the nearest area of safety. The Preds still came at them, they still jammed up the boards, but the Men of Four Feathers were patient and brave enough to find teammates’ sticks instead of just open space beyond the blue line. Once you break down that initial wave of Preds, then the joy can begin.

Clean. It’s a word we haven’t gotten to utter much the past couple years. Not spectacular, just clean. Efficient. Steady. Assured. No fuss, no muss. Happiness.

Not many in such an efforts, but let’s get to what bullets there are.

-The only thing to jump out other than the shutout was the puked-up-slushy condition of the Bridgestone ice. But I guess now we know what opposing teams feel when they come into the UC.

-It’s only 11 games for the Preds, but remember when we used to reference the small sample sizes of what Weber looked like without Ryan Suter? It looks like that.

-Brandon Saad drew what seems like his 48th penalty against this road trip. In true fact though, he’s second on the team behind Sharp for drawing penalties, at a flat 2.0 per 60 minutes. In fact, his physicalness is something the Hawks haven’t had against Nashville before, because at times they’re always going to reduce games to board-battles.

-You’ve got that release, Dream Warrior? Could we see that more often?

-Thanks to Dirk Hoag’s incredible determination to be the best at this, we can look at actual CORSIs tonight. The only Hawks who came out significantly on the negative end were Bickell and Shaw, which seems weird. I’m going to chalk it up to the 3rd period I guess, because the eye test didn’t see that.

-Hawks seem desperate to get Sharp a goal, but his assuredly upcoming hot streak will be much more welcome when the Hawks are struggling for goals, instead of now.

-Seabrook and Keith once again had a couple yippy moments, but just a couple. It’s all right Ma, we’re already winning.

-The only Hawks to break 21 minutes of ice time was Oduya. Oduya had a couple egregious turnovers, which isn’t encouraging as we fear what he will do against furious and intelligent forechecks like Nashville’s. But it’s only one.

The road trip is over without a regulation loss. The Hawks won’t face a trip longer than four games for the rest of the season. They have seven straight at home and 10 of the next 12. Yes, it’s only a quarter of the season gone, but these next three weeks really should be run away and hide time.