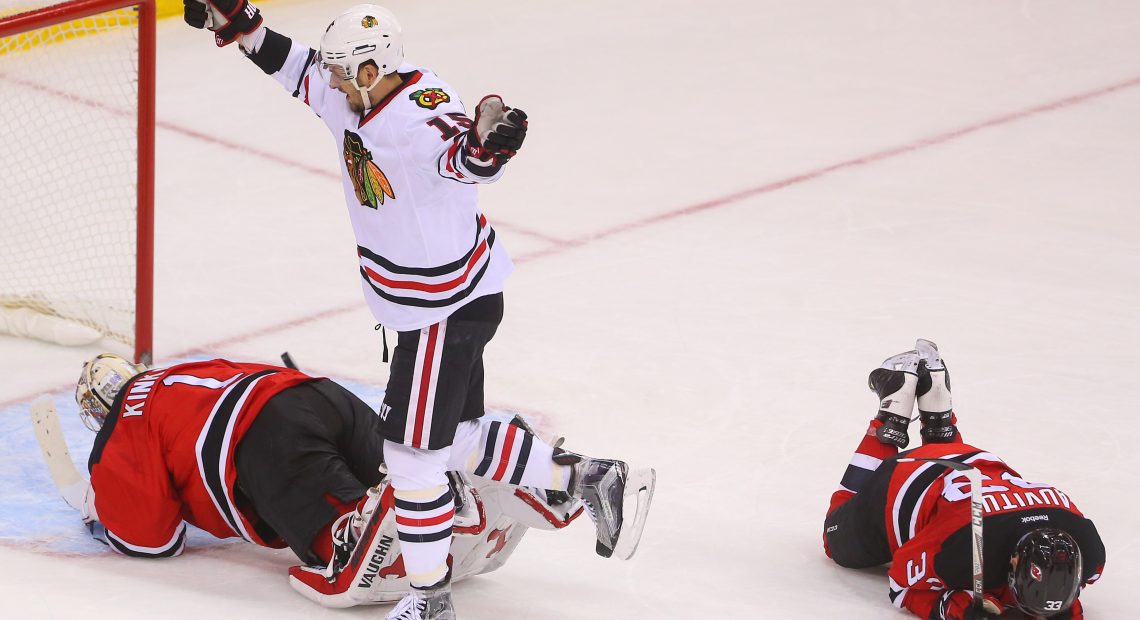 If there are two overarching themes to this early season, it is that the Hawks penalty kill will surrender at least one goal per game and the Hawks are a team that gets better as the game goes on.

The Hawks, as is their wont, gave up a power play goal on their first chance. It took a Herculean effort from hockey unicorn Mike Cammalleri to make it happen. Cammalleri dove and managed to steal the puck while laying on his stomach while maintaining control. 30 seconds later, the puck was behind Corey Crawford.

The Hawks answered with a power play goal of their own in the second and despite the fact the Hawks were getting outshot 2-1, it was still a 1-1 game into the third. Using the early season as evidence, you had to feel confident the Hawks would get at least a point out of this one.

Even with the Devils scoring in the first five minutes of the third, things never seemed that bleak. I suppose that’s what happens when you’re carrying the play to the tune of a 80% possession share. A Vernon Fiddler high stick with five minutes left helped open the door for the Hawks.

Then it was just the old fashioned “get the puck to Toews in the corner and let him jam it into the goalie until it goes in” play we have seen for 8 seasons.

In overtime, Taylor Hall decided he wasn’t going to come off the ice. So all it took was the Hawks making one full change and Hall was too gassed to keep up with Artemi Panarin. It was an easy game-winning goal from there.

Other things worth noting.

–I mentioned the Devils were outshooting the Hawks 2-1 through two periods and it certainly didn’t look very good. However, something worth noting is that the Hawks weren’t getting buried in possession. The Devils were blocking and tipping a fair number of shots to skew the traditional SOG more in their favor.

Then in the third, it was a complete whitewashing by the Hawks.

–Nick Schmaltz debuted on the point of the second power play unit. Can’t say any of us saw that coming but it certainly bears watching if he gets more than this game there.

–Michal Kempny seemed to play better the longer the game went on. In the early going, he had the traditional look of a guy who is thinking the game too hard. He was waiting on passes, taking an extra second to start skating and/or just making terrible decisions. There was one shift where he got pickpocketed in his own end, ended up getting the puck back and then threw a cross-ice pass in his own end that was easily intercepted.

The encouraging news was he settled in by the second and third period and finished the game in the positive, in terms of possession.

–It doesn’t fit the narrative so it won’t be mentioned but Artem Anisimov won 50% of his draws.

–8 games into the season with mixed feelings and still the Hawks have only lost by one goal in each of their three losses (Yeah, I’m not counting the two empty net goals for St. Louis). Their penalty kill has been abysmal and yet 5-on-5, they are showing very encouraging signs.

Of course, all of this points back to the unheralded and much maligned Corey Crawford who has been steady as usual. Hard to imagine the Hawks getting to the third tied at 1 without him on Friday. In fact, it’s hard to imagine the Hawks being above .500 without him. Crawford has been able to keep the Hawks in games throughout the early part of the season while the rest of the team settles into the game, hereby allowing the dominant third periods which have become quite enjoyable.

Sure, it would be great if the Hawks just dominated teams through all three periods but this isn’t 2010 anymore or even 2013. The Hawks need a goalie that can get them through the tough times and give them an opportunity to win. Crawford has done that. Again. You just won’t hear about it from many corners.