REVERSE METATRON: Winging It In Motown

For the first time in this playoff run, the sphincters are tightening just a bit. The Hawks face some actual adversity. While this isn’t a must-win game for them — any of the two in Bailout Town will do, really — you wouldn’t want to be around if the Hawks actually trail in this series. Combined with a bounce back needed from the condor egg the Hawks laid on Saturday afternoon, and we all could use a fiery effort tonight.

While the Hawks have made noise about skating harder or more intensely — and that’s not wrong — I think the correct term would be to skate better. A commenter in our postgame wrap on Saturday pointed out that the coverage on CBC was heavily focused on the Hawks being guilty of a lot of fly-bys. That they were. If you’re not familiar with the term, it means that instead of skating into the body of the puck carrier or stopping at a loose puck, it’s more of a sideswipe with a reach of the stick and if that doesn’t work you’ve skated by the play. It’s the easy way. That’s especially detrimental on the forecheck, where a d-man knows that with one simple move he will then have the freedom of the rink to make his play. That doesn’t mean the Hawks need to be hellbent on taking pounds of flesh, but being “heavier” on the Detroit blue line will force them into the mistakes we already know they’re dying to make. The Hawks just have to engage Scum more than they did on Saturday (though everyone forgets they were more than enough on Wednesday), and things will look a lot better.

Two games too late, but Viktor Stalberg returns to his customary third line role and Michal Handzus is punted from the second line. Not that I’m particularly chuffed to once again play the Dave Bolland “Do I Give A Shit Tilt-a-Whirl,” but Zus wasn’t doing much there. This is the second game he hasn’t taken part in the morning skate, which means he’s carrying something and may be even more hampered than he already was by age and legs. If Bolland’s at least interested, he can at least somewhat help the 2nd line with the speed they lack. I also expect Stalberg to be one giant middle finger to the world last night. If Latrell Sprewell played hockey, it would probably have looked like what Rattlehead will.

There will also be a lot of attention on Jonny Revelator tonight, and there should be. His response to the way he’s being played has been….let’s say less than inspiring. I don’t know if or why Tazer thinks he’s entitled to space, and I don’t know what he thinks he’ll see in future rounds if the Hawks get there when Messrs. Kopitar, Richards, Couture, Pavelski, Thornton, Krejci, Bergeron, Crosby could be waiting. Bitching about refereeing is not what a player who supposedly sets the tone for his team does. We love to put Toews in the same category as Crosby in this town, and on this blog. Well, teams try and bully Crosby too. He just gets on with it and kicks your ass. Toews is no shrinking violet. It’s time he did too.

It’s now 3 goals in 31 playoff games. The excuses are getting old. It would be befitting this captain to bring something fierce on the road, as it’s kind of been his M.O. in the past — including a pretty Leviathan performance in this very building in Game 2 in ’09 — which the Hawks eventually lost but Toews was unplayable that night. I also get the feeling if Toews takes this by the throat, Brandon Saad will probably come with him. But it’s time, isn’t it?

In fact, this game being on the road can help the Hawks in some ways. They’ll be more content to be simple, and that means just getting pucks deep and trying to pressure the Wings below the goal line, where they found a Ponce De Leon fortune in Game 1. I also expect the Hawks to turn the front of their net into a Supermax prison, as they did when called upon in Game 4 against Minnesota.

There’s no reason to panic. The series is merely tied with the Hawks only requiring one win in Detroit — where they’ve gotten nine of the last 11, by the way — to see this out. They’ve generally answered when questioned this season, and authoritatively. As a fan, you have no reason to suspect they won’t tonight.

Raw power is coming for you. 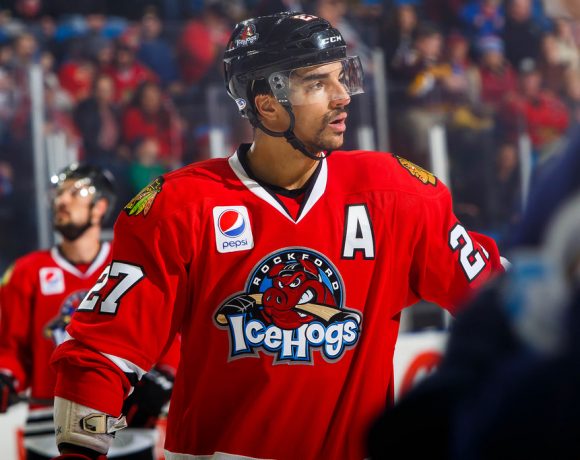 High On The Hog: Martinsen Lays The Norwegian Wood